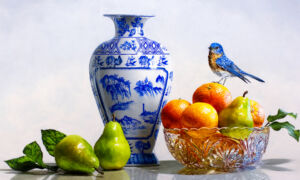 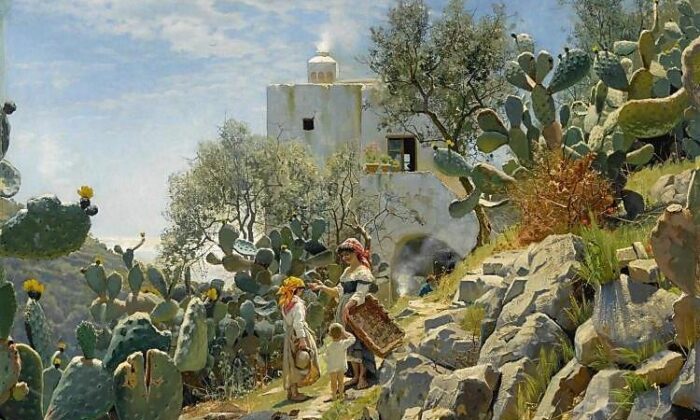 Taking You There: ‘At Noon on a Cactus Plantation in Capri’

Since retiring from the FBI, I have worked privately for large insurance companies recovering numerous pieces of stolen art worth millions of dollars. I often search auction-house websites, cruising through them, even when not for a case. Lovers of fine art do this.

A couple of years ago, I came upon a painting that truly captivated me and had the immediate urge to bid on it. This was “At Noon on a Cactus Plantation in Capri,” from 1885 by Peder Mork Monsted, a large piece, about 5 1/2 by 4 feet.

Monsted was born in Denmark in 1859 and had the good fortune to be the son of a prosperous shipbuilder. This enabled him not only to pursue his studies at the Royal Danish Academy of Fine Arts but also to travel through Europe painting landscapes. Most were garden or woodland settings, and wintry scenes with sleighs on snow-covered country roads. Almost all had brilliant sunlight illuminating the canvases. How could I not bid on this piece?

But finances were tight. Of five children, my two daughters, now out of college, had thousands of dollars in college loans, with the onus on my shoulders. Over years, the total due slowly wended its way down to around $65,000, and the needed amount was sitting in a bank, intended to free me of this last financial burden.

But the painting! The Monsted! It looked up at me from the auction website, crying out to be placed on my living room wall. The bidding would start at $40,000 for this exquisite museum-quality piece. If the bids went up slowly, and a well-funded museum was not among the competitors, I might just hold on to it.

Then I took a deep gulp. I was so close to paying off all those loans.

I came to my senses and got out my checkbook … and paid off the loan.

When auction day arrived, the final bid of $50,000 took home the prize. I heaved a sigh, knowing it was now out of my hands forever, yet in the balance there was something much more fulfilling. I emailed my daughters that the obligation was finally paid off, and they responded with glowing appreciation about what it meant to them to live without the grief that so many of their friends suffered—monstrous monthly payments seemingly going on forever. Few days would make me feel more like a successful Dad.

It is 1885, a dozen years before the turn of that century, and you find yourself on the Isle of Capri. It is scarcely populated, and mostly survives on flocks and farming, even though so hilly. Yet it has the perfect geology and climate for cacti, especially the prickly pear kind. They grow faster and stronger than almost anywhere else—enough to support a whole plantation’s worth. Trails weave through them so you would love to take a stroll, even knowing the danger of the prickles is but inches away.

It is a sunshiny day with cottony balls of clouds in the sky. A mother speaks with her 12-year-old daughter, her toddler near her side. She is taking a well-deserved break from her daily routine. A midday meal is cooking in the white stucco house, and smoke puffs up from the chimney.

On a seemingly lazy morning, it is just another day in their lives. But this moment is suspended in time: the warmth of the scene, luxuriant vegetation, and slabs of strident and stark gray rocks—you can actually feel their hardness with your eyes—shooting up from the ground, protecting the path. They help bake the hillside, stirring on the cacti to grow their arms up toward the heavens.

The image is balanced: a third sky and two-thirds landscape, diagonally slicing the scene, while the sparkling Mediterranean Sea peeks out in the distance from behind an olive tree. Italy is known for them, but here, the cactus is king and the family’s yearly income. This small group tends their slowly growing crop, but it is a life enjoyed, tucked away in this secluded corner of the world. Marking this moment, a faraway clock strikes—“At Noon on a Cactus Plantation in Capri.”