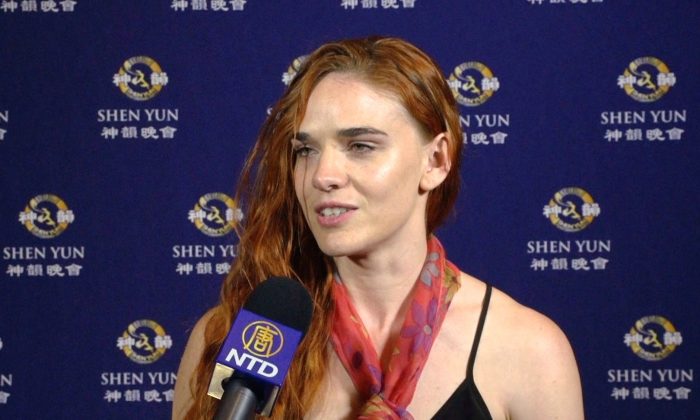 Among the audience was dance teacher Peta Hungerford. Ms. Hungerford is the founder and director of dance school ‘Hunger for Dance’, where she teaches many different dance styles and performs professionally.

She was amazed to see the dance disciplines, classical Chinese dance and ethnic dance, displayed in the performance. She was equally amazed to be exposed to a cultural experience she said.

“It was such an amazing experience. To see the discipline through the dancers and the cultural experience as well,” Ms. Hungerford said.

“To bring that all together and learn something about Chinese history while enjoying these phenomenal dancers was really amazing.”

Classical Chinese dance is at the heart of Shen Yun, but it is also so much more.

The website says, “One discovers a sea of traditional Chinese culture. Mortals and divine beings merge on stage as one. Principles such as benevolence and justice, propriety and wisdom, respect for the heavens, and divine retribution, all come to life.”

“I found it really great to be able to be engulfed in a story and learn something and from viewing these dancers in their disciplines—and obviously, they’re very hard training,” Ms. Hungerford said.

“To see it all come together and be taken away to another place and just learn while watching dance was just amazing.”

She said the performing arts was probably the only way of learning about China’s true 5,000 year history.

“It was just like a virtual experience … Everything with the music created this whole other world that you went to, and just get taken away to learn, and be taken into this culture and history and brought back.

“They took it to a whole other level, and it was quite a spiritual journey to be able to sit there and take it in and really connect and watch the dancers and see their souls.

“You can tell that they’re very passionate about what they do, and that comes through with their movement and their dance. The whole visual spectacular was just a great experience.”

Shen Yun backdrops are as grand as they are intricate, so remarkably true to life. The dancers are so skilled they bring the stories to life allowing the audience to forget where they are, taking them on a journey to another place and time. Ms. Hungerford said she was lost for words and felt it was important to revive this ancient traditional culture.

“It’s just such a beautiful show, a beautiful culture, beautiful history and not to be able to present that in your own country is a shame.”

She said she would tell all her students about Shen Yun saying that they really need to see it.

Bringing these stories and having the courage to get together and create something that’s so important is really amazing.
— Peta Hungerford

“It’s not just dance, and it’s not just technique on stage, it is just your hearts, your souls. It’s a whole other level.”

She would tell the performers, “What you do is absolutely amazing. It’s just phenomenal. Bringing these stories and having the courage to get together and create something that’s so important is really amazing. I thank you for your work.”

Madame Lily Vita and her sister Alice Isamlun, on holiday from Egypt also experienced the wonder of Shen Yun.

Both retired now, Ms. Vita taught classical ballet for over 20 years and founded the Darwin School of Ballet in 1975, while Ms. Isamlun, worked with the World Health Organization [WHO] and was stationed in Alexandria, Egypt.

“The special effects were just so, so flabbergasting,” she said. “I liked very much all the costumes. It was magnificent. The men were very strong. I liked the music. I enjoyed it very much.”

As a former ballet teacher, Ms. Vita said, “It’s a different technique to classical ballet, but it is very difficult and very hard. To do all these movements with the costumes, it takes a long time to do it all together. It’s very hard work.”

“Classical Chinese dance is composed of three main parts: bearing, form, and technical skill,” says the website. “Other than complete training in the fundamentals, it also entails systematic training in movements and postures, as well as very difficult jumping and tumbling techniques. And so, alongside ballet, classical Chinese dance is one of the most comprehensive dance systems in the world.”

Ms. Isamlun couldn’t find enough words to explain how  impressed she was by Shen Yun.

“It was really excellent in every respect—the music, the dancers, the scenery that changed so often, the costumes, it was really outstanding,” she said.

I would love to go deeper in this culture.
— Alice Isamlun

“I would love to visit China and learn much more about all our ancestors. They have all the knowledge and I would love to go deeper in this culture.”

“I can’t find enough words to express my enthusiasm.”

‘Thanks for showing your beautiful talent’

Ella Cernak, a law and business management student and a former classical ballet dancer was also at Shen Yun. She said the Shen Yun dancers were far more talented than she could ever hope to be.

“It’s been wonderful—all the dancers and their incredible talent to be able to bring themselves to such heights of acrobatics and also the skill of their classical dance.”

She was excited with the animated backdrops choreographed to match the vibrant costumes, Shen Yun orchestral music,  and the story based dances.

“It’s been really exciting to see the backdrop. I love it. It’s something that I haven’t seen before, having the interactive background,” Ms. Cernak said.

She said the dances were so well done, they told the complete story, there was no need for narration.

“Dazzling costumes, thunderous battle drums, and powerful flips fill the stage with color and energy. Exquisite melodies and animated backdrops uplift your spirit and transport you to another world.”

“I’ve always been a massive fan of traditional cultural dance. It’s really wonderful to see that this traditional dance has been able to transcend through the dynasties that have happened in history, and still be able to be presented for us to see here today,” Ms. Cernak said.