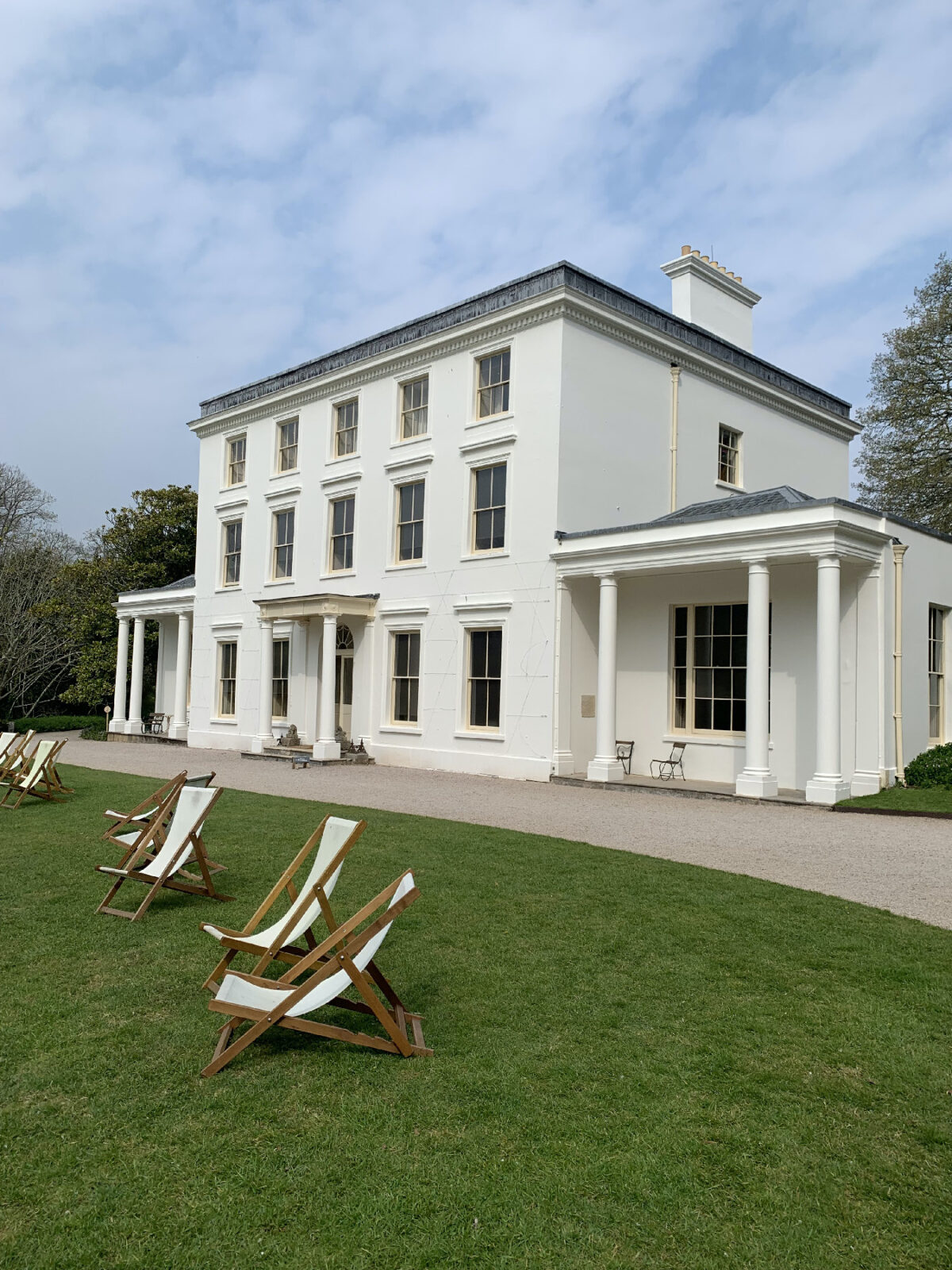 Waiting for guests and perhaps a round of croquet, the Regency-styled Greenway home of Agatha Christie on the south coast of England was a focal point for entertaining and writing widely read mysteries. (Courtesy of Carl H. Larsen)
Travel

You might call Agatha Christie’s Greenway Estate the scene of the crime—well, many crimes, that is.

Acclaimed as the world’s best-selling author, Christie spent a large part of her career writing those spellbinding mysteries at her Greenway retreat overlooking the River Dart, a few miles from Torquay, where she was born in 1890 on the south coast of England. She lived at Greenway with her second husband, prominent Middle East archeologist Max Mallowan, who was 14 years younger.

Surveying the lush gardens, views across the river and the two-story home, there is no mystery as to why they purchased the property in 1938, even as war clouds loomed on the horizon. It would have been a crime not to, especially at the bargain price offered.

“The loveliest place in the world—it quite takes my breath away,” said Christie about her writer’s retreat, tucked upriver from the coastal town of Dartmouth.

The couple enjoyed the estate as a summer and holiday home until their deaths, Christie in 1976 and Mallowan in 1978. Christie’s daughter Rosalind (from her first marriage to Archibald Christie) and her husband, Anthony Hicks, lived there until 2004, when the 237-acre estate was given to Britain’s National Trust, which embarked upon a program to conserve and catalog items in the house and on the grounds.

The Georgian-style house was built in the late 18th century. The trust opened the residence to visitors in 2009, after first opening the magnificent gardens. In season, displays of dahlias, hydrangeas, and camellias line the garden walkways, where paths lead to a peach house growing fruits.

Walking the grounds, dedicated Christie readers may pick up on the fact that the estate is the locale for two of her murder mysteries. Inside, the setting today is how the house would have looked in the mid-’50s, when Christie was at the height of her career.

Entering the front door, there’s a sense that the home is still occupied. A treasure-trove of family photos, art, and souvenirs from global travels greets visitors. Comfy sofas and chairs beckon to sit down, although disapproving docents on hand would quickly say no.

In all, there are more than 12,000 items in the collection—reflecting Mallowan’s career as well—from prehistoric artifacts to mid-century paperbacks and a complete set of Christie’s first-edition novels.

You don’t have to go far to find a tantalizing clue into Christie’s past. There, on the wall, is a portrait of George Washington, a surprise in what otherwise is a very British home. Washington occupies such a prominent spot because Christie’s father, who died when she was 11, was an American. Her mother was British. Still, Christie’s American roots were never far.

Shy throughout her life, Christie’s early education was completed at home, where she became an accomplished pianist and opera singer. A job working as a pharmacist’s assistant in World War I came in handy, giving her a knowledge of poisons used in writing her diabolical plot twists.

For Americans, one of the biggest surprises in the house is in the library, where a frieze lines the upper wall. It depicts naval action by the American 10th Coast Guard Flotilla during World War II. The library then was a mess hall used by the American military, which had taken over the estate during the war. The couple, meanwhile, had to give up their summer home until the war’s end.

Memories in the dining room include the sumptuous dinner celebrations held here to mark Christie’s 60th, 70th, and 80th birthdays. Conservators who combed the house found in a cupboard the award given Christie in 1971, proclaiming her Dame Commander, Order of the British Empire. (For his work, Mallowan had a similar recognition.)

Today, years after her death, Christie’s popularity appears to be as strong as ever. A recent headline from The Wall Street Journal reads: “Young People Discover Hot New Writer—Agatha Christie.”

Two new books examine her life, one about her mysterious disappearance while breaking up with her first husband, “The Christie Affair,” by Nina de Gramont, and another, “Agatha Christie: A Very Elusive Woman,” by historian Lucy Worsley. And her work remains popular on stage, including “The Mousetrap” in London, the longest-running play of all time. This fall a touring company will take “The Mousetrap” to cities across Britain to celebrate its 70th anniversary.

Clues are aplenty as a visit to Greenway opens the door on the life of one of the world’s greatest authors and the beautiful estate that influenced her writing. The essence of Greenway was captured by her grandson, Mathew Pritchard: “For a small boy it was paradise: plenty of space, plenty of attention from a small and adoring family, and the river with all the pleasure boats steaming up and down. It was English countryside at its best.”

Operated by Britain’s National Trust, Agatha Christie’s Greenway Estate offers a café, restrooms, a shop, and a used bookshop, as well as extensive hiking trails. In season, ferries operate to Greenway from nearby Dartmouth. To plan a visit, consult NationalTrust.org.uk and type in “Greenway” under “Where do you want to go?”