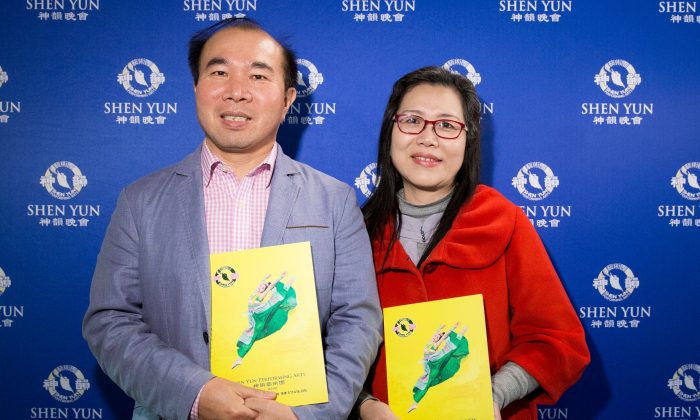 Zhang Maonam, a legislator of Taipei City Council, and his wife attend Shen Yun at Taipei's National Taiwan University of Arts in the evening on March 17, 2016. (Chen Bozhou/Epoch Times)

TAIPEI, Taiwan—When it came to Shen Yun, it didn’t matter to city councilors from Taipei if they saw the performance for the first time or the fourth time, as they all walked away greatly inspired.

“This performance injects a very powerful force into your heart and mind, allowing you to feel that every single person has his own destiny,” said Zhang Maonam, a councilor with the Taipei City Council who saw Shen Yun for the first time. With this energy, Mr. Zhang explained that “a person will be able to tell right from wrong and make a correct judgement.”

Such energy would not only benefit individuals, but it would also bring harmony to any society, according to Mr. Zhang. “Every program has a real meaning behind it, such as always being compassionate, having faith in Buddha, and persevering in what is right,” explained Mr. Zhang.

Shen Yun is a classical Chinese dance and music company based in New York. Its mission is to bring back traditional Chinese culture, which has nearly been lost under communist rule.

Mr. Zhang told how he was thoroughly impressed when one of the universal themes, good prevails and evil suffers, was portrayed through the dance “Monks and the Red Guards.”

“The monks were bullied by the Red Guards. However, when the monks showed compassion, the guards changed and they became devoted to Buddha,” said Zhang.

The Red Guards were militant Chinese youth in the 1960s mobilized by Mao Zedong to attack anyone and anything considered to be “counterrevolutionaries,” including Chinese cultural sites during the years of Cultural Revolution.

I will forever remember what I saw … and I will pass on these feelings to my friends.
— Zhang Maonam, Taipei City Councilor

“My soul has just been cleansed, and only people who have become pure would be able to appreciate the essence of compassion,” said Mr. Zhang as he planned to share what he had taken away from the performance.

“I will forever remember what I saw … and I will pass on these feelings to my friends.”

“The performance takes us back in time, allows us to complete about what is happening now, and allows us to see what is in the future. This is why I like Shen Yun so much,” said a cheerful Gao Minhui, a councilor with the New Taipei City Council, who has seen the performance four years in a row.

Shen Yun presents an entirely new program every year. As a result, many audience members who have seen it multiple times like Ms. Gao are eager to come to see the performance again and again.

What struck Ms. Gao the most when she saw it the first time continued to be mind blowing to her—the animated digital backdrop. “I keep thinking how it is possible to have this backdrop. So magnificent. This is not something easily done,” said Ms. Gao, who jokingly compared herself as like a frog in a well before seeing the Shen Yun backdrop.

The animated digital backdrop is one of Shen Yun’s most unique features, as it extends the range of the stage to bygone societies, scenic settings, and heavenly paradises.

What’s more, the choreography, costumes and storytelling were all top-notch, said Ms. Gao. “The different programs were all very positive with a very compelling storyline. People in the audience do feel like they are part of the performance.”

Ms. Gao said she was grateful and blessed to have become a huge fan of Shen Yun. “However busy I might be, I will come to see Shen Yun, and I look forward to the show every year.”