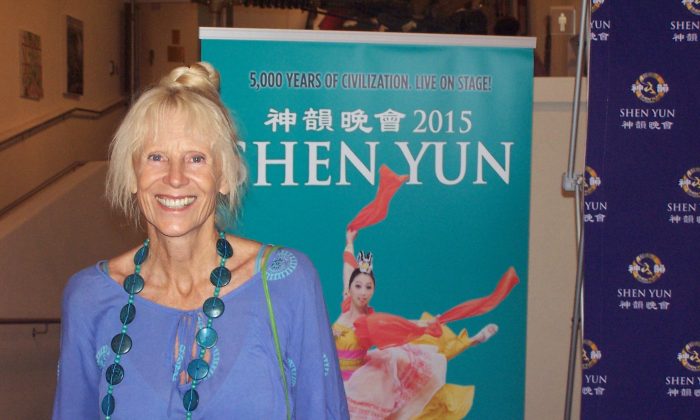 GOLD COAST, Australia—The generation gap closed when the Shen Yun Performing Arts performed to a packed house on Feb.1, 2015. The elderly and young alike were carried away with the moving experience as they often erupted into spontaneous applause during the performance.

Kit Schell who works in the health and well being industry as well as teaching Tai Chi was touched by the spiritual aspect in the performance.

“I’ve seen … as they did the dance with their floating arms, with the beautiful long fabrics coming up. I’ve seen them floating like part of the spiritual beings as they were flying [to] their freedom, it was amazing.”

Ms. Schell was referring to the dance Sleeves of Grace a classical Chinese dance.

“I see purity, I’ve seen that in the dance. The culture is so pure it’s a shame the rest of the world is not like that.”

Liz McSween, owner operator of a retail and tourism business also connected to the spiritual aspect of the performance.

“I think it comes from a greater source than us,” she said. “They are doing something wonderful for humanity and you can see in their performance the energy level is wonderful, it’s very strong and each performer seems to do it well. The whole energy is coming through them and coming out to us.”

Ms. McSween felt that the performers captured the universal positive energy, “magical , you know the whole concept, the whole energy of the show. The lighting, the colours, the moves and the mood that they bring, I think it really does portray that.”

Ms. McSween was very pleased she had brought her children to see Shen Yun. Her children were also very impressed with the performance. “I feel very happy and amazed.”

Margi Bingley, a retired exporter was overcome with emotions from one of the messages that she felt Shen Yun portrayed. “That message is a good strong message that people shouldn’t be persecuted and mediation and peaceful way of life is a very good value and really the only value for the survival of humanity,” she said.

“It’s a worthy timely reminder that compassion and goodness and love and understanding and truth are very necessary, essential right now.”

Ms. Bingley was referring to piece, The Power of Compassion which portrays the brutal persecution of Falun Gong practitioners in China.

Kim Vereckei, office manager was particularly taken with the performance by erhu virtuoso Xiaochun Qi who performed “All For Today,” accompanied on the piano by Xin Lian.

She said, “I absolutely loved the music, especially that [erhu]. It was music to my ears, I absolutely adore it. I am going to go home and see where I can buy it.”

“It’s fantastic! I would like to come again next year.”

Her mother-in-law Edith Vereckei was a dress designer, pattern maker and cutter before retiring. She loved the costumes.

“I just loved it. I loved the costumes and the beautiful graceful dancing, the long sleeves. I loved the chiffons, it was just beautiful. They were beautifully designed and suited every story.”

Shen Yun has hundreds of handmade costumes each year, specifically designed for each performance. According to the Shen Yun website, “Every costume in a Shen Yun performance is presented with brilliant colors, displaying a splendid spectacle—from the Tang Dynasty’s “Raiment of Rainbows and Feathers” to imperial dragon robes, phoenix coronets, and cloud capes.”