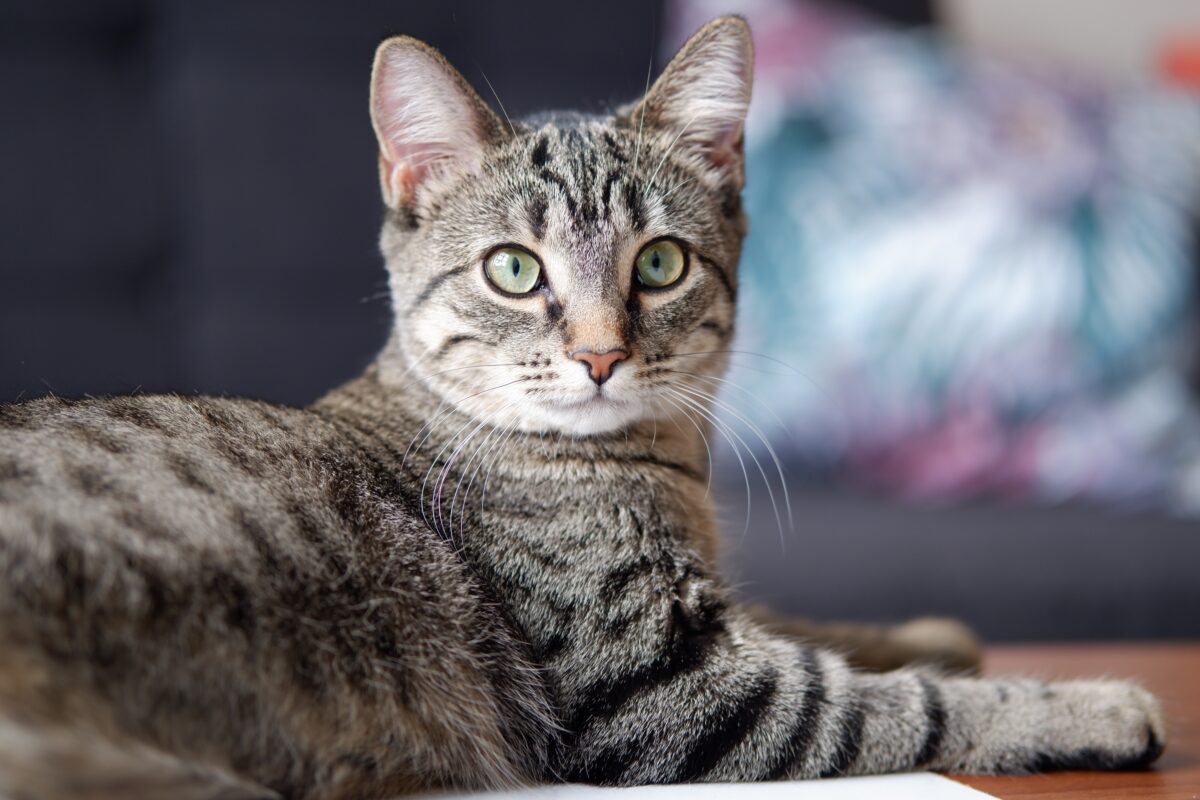 Tabby Is a Common Feline Coat Pattern, Not a Breed

Q: What’s the difference between a tabby and a tiger cat? Is a tabby a purebred cat?

A: Tabby is not a breed, but a coat pattern common among purebreds as well as mixed-breed cats, usually referred to as domestic short- or long-haired cats.

The classic tabby has a blotched or swirled pattern of dark markings over a lighter coat color. This coat pattern often has a bull’s eye on each side or a butterfly shape on top.

A marbled tabby is a classic tabby whose coat has a cloudy appearance.

The mackerel tabby, often called a striped tabby or a tiger cat, has narrow stripes of dark fur instead of the blotches or swirls of the classic tabby. In the “broken mackerel” coat pattern, the stripes appear as dashes or broken lines.

Other tabby variations include the spotted tabby, which has dark spots instead of stripes or swirls, and the ticked or Agouti tabby, which is flecked.

Tabbies have thin, dark stripes on the face, expressive markings around the eyes, and an “M” on the forehead. Some tabbies have white bellies and feet.

Tabby cats come in a variety of colors, including black, gray, silver, brown, and orange, sometimes accented with white. Female tabbies can even be tortoiseshell, which is black and orange, or calico, a combination of black, orange, and white.

Q: Tank, my 3-year-old Rottweiler, backpacks with me most weekends. I think he’s old enough now to carry his own pack. How much weight can he carry safely?

A: Tank is a lucky guy to spend time outdoors with you, and backpacking sounds like fun.

Buy him a top-quality doggy backpack that fits well and has enough padding that it won’t chafe. Let him carry it empty for a couple of weeks.

Then add a load that weighs up to 10 percent of his body weight. If Tank weighs 120 pounds, that’s up to 12 pounds total, including the pack.

Make sure to balance the load and watch him closely throughout your hikes. Remove the pack each time you stop to rest or view the scenery.

If Tank seems comfortable and he’s moving well, gradually increase the amount of weight in his pack. Most healthy adult dogs can eventually carry up to 25 percent of their lean body weight. If he slows down or shows any sign of distress, remove the added weight.

Never put anything really important, like your money or an extra pair of glasses, in Tank’s backpack. If he wanders off and loses his pack, you’ll be in trouble.

Similarly, don’t put anything in his pack that needs to stay dry in case he suddenly flops down in the lake you’re hiking past. You don’t want your energy bars or his kibble to get soggy.

Dogs don’t function well as weekend warriors, so walk Tank daily or almost every day so he remains fit for your weekend hikes. You don’t want him to sprain a ligament or strain a muscle or tendon when you’re far from your car.

Watch him closely on hot, humid days, especially when the sun beats down on his dark coat. Dogs are unable to regulate body temperature well, so you may need to lighten his load and shorten the hike.