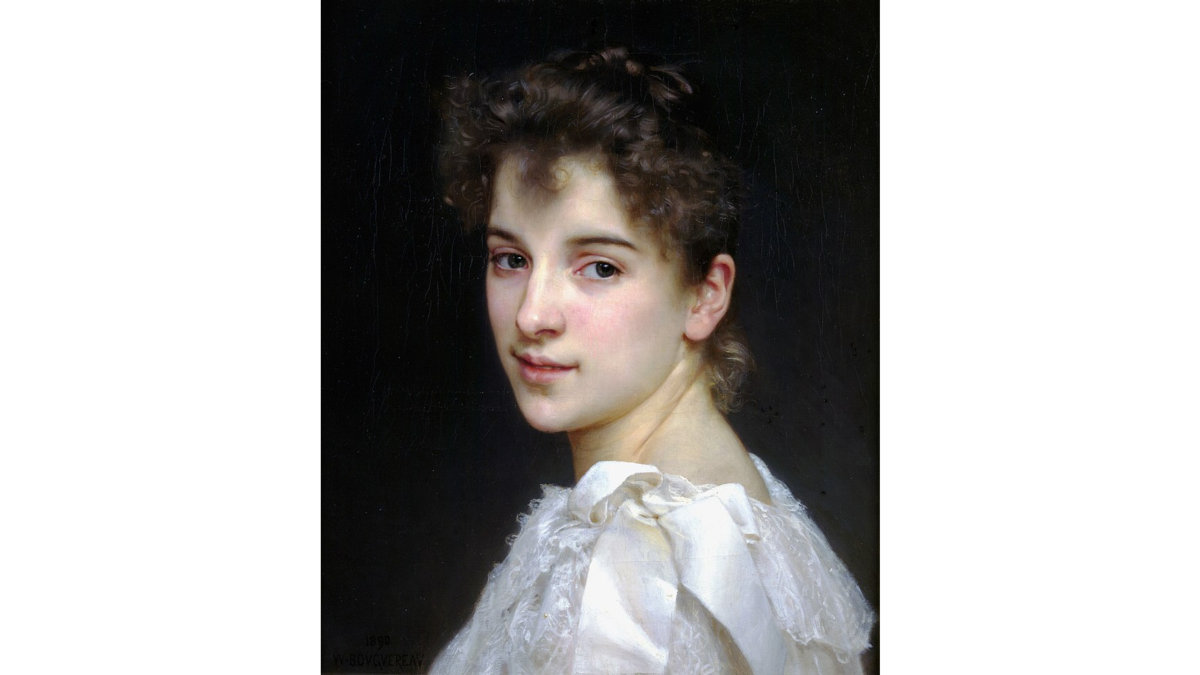 Artist William Bouguereau painted the beautiful side of people as in this portrait of “Gabrielle Cot,” 1890. Private collection: Fred and Sherry Ross. (Public Domain)
Books

Just as a mirror reflects how we see ourselves, so what we wear signals to others how we want them to think about us. Every time we decide on how to dress and what to wear, we choose to either hide behind the superficiality of dress or complement our inner selves by our outward adornments.

In his short story “Dressed for a Party,” T.S. Arthur contemplates the importance of how we dress, especially when others will see us. By using the character of young Alice, who is preparing for a party, the author shows the role that our consciousness plays when we choose what to wear. After Alice dresses, she presents herself to her Aunt Helen.

Adorned in “white, with a superfluity of pink trimming, jewelry and flowers,” Alice truly admires how she looks and feels ready to go to the party: “She thinks the make up splendid—the effect striking.”

However, Aunt Helen wishes to be honest with her. Alice is overdressed. Her dress has too many ribbons, her hair too many flowers, and her neck and arms too much jewelry. Aunt Helen equates Alice’s excessive adornment to that of a prima donna or a May queen. This excess conveys “a sense of vulgarity” and a superficial value.

Aunt Helen explains to Alice that if she goes to the party so overdressed, she “will certainly attract all eyes, but … will not win admiration from a single heart whose regard is worth having.”

The older woman counsels Alice to change her dress from outward extravagance to an appearance that complements and highlights the beauty and intelligence of her mind. Thinking and appreciating are virtues of the “higher class,” she says.

This class of people consists of those “whose minds are clothed in beautiful garments whose loveliest and most precious things are, like jewels, shut within a casket.” Such minds adorn themselves with true thought and appreciation and take into consideration their dress only as a means of revealing their character.

After Aunt Helen critiques Alice’s dress, Alice, in great disappointment, replaces her extravagant garment for a simpler one, a few complementary jewels, and a modest hair ornament. She is now a picture of elegance, beauty, and charm.

Though Alice is not entirely happy with her new outfit, she goes to the party. Upon entering, she realizes that her dress is one of the plainest. She stands out because her dress is quite simple compared to the elaborate costumes around her.

Alice feels discouraged. She looks so plain that a certain young man she sees does not seem to see her, as other, elaborately adorned ladies have attracted his attention.

Alice’s unhappiness and remorse do not last long. As she sits alone, she composes herself into a more thoughtful and observant mood. She thinks: “If fine feathers make the fine bird, let him have the gay plumage. As for me, I ask a higher estimate.” She becomes content with her situation and realizes, as Aunt Helen says, that the true adornment is her mind.

As Alice contemplates her situation, a lady friend joins her. This friend addresses Alice’s choice of costume: “The fact is, you shame at least one half of us girls by your perfect subordination of everything to good taste. I never saw you so faultlessly attired in my life.”

Others notice Alice’s beauty as well. That certain young man whom Alice has been waiting to see finally addresses himself to her. As he does not monopolize her, another young man also seeks her attention. Each young man agrees that Alice is the “most charming” and that “she has had the good taste to dress in a modest, womanly manner.”

Alice’s beauty and elegance stand in contrast to all of the other overdressed young women. “The charm of her fine intelligence” far exceeds the charm of the fine adornments around her.

Through Alice, the author shows that if we dress for attention, we will certainly attract attention. However, this attention will most likely be unwanted and short-lived, and the image of ourselves will be marred by our excessive desire for attention.

If we dress in an elegant, modest, and simple manner that highlights our real value, then we will receive the admiration, love, and attention of those whose opinions and admiration are truly worth obtaining. Good company does not reside in those wearing the newest fashions but is, as Jane Austen says in “Persuasion,” “the company of clever, well-informed people, who have a great deal of conversation.”

By thinking and observing, rather than adorning and pleasing, we can look at ourselves and reflect on our state of mind. We can assess why we dress the way we do and understand how it represents character, purpose, and meaning.