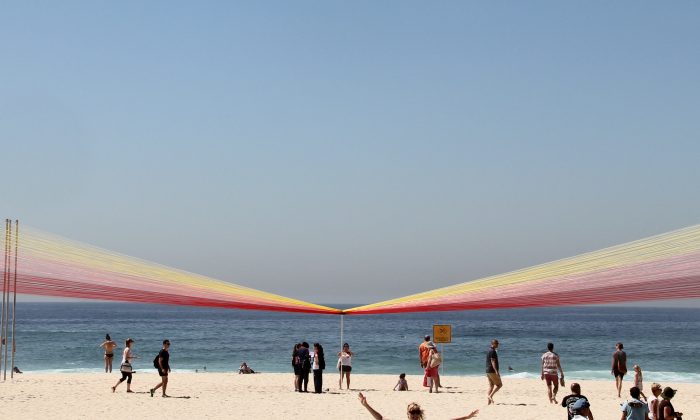 'Permanent Sunrise' by Argentinian Alejandro Propato, is made up of 6 kilometres of coloured nylon wire. (Shar Adams/Epoch Times)
Art Marketplace

Sydney’s Sculpture by the Sea Carves an International Reputation

SYDNEY—Sculpture by the Sea was a little known event when visionary David Handley launched the exhibition at Sydney’s Bondi Beach 18 years ago. Now it is a three week event attracting around half a million visitors.

The largest annual sculpture exhibition in the world, Sculpture by the Sea features over 100 local and internationally recognised artists whose works are spread out over a spectacular 2 kilometre coastal walk between Bondi and Tamarama Beach.

Mr Handley, who as founding director remains the driving force behind the event, credits part of its success to the inspirational setting.

“What I love about it, is its just a phenomenal coastline and to allow that creativity, [for artists] to just come up with whatever they want,” he told Epoch Times at the 2014 exhibition launch on Oct 23.

There are 109 artists exhibiting this year, selected from around 500 applicants. Of those 33 are international artist, representing 16 different countries. They include 13 sculptors from Japan, four from New Zealand and two from Sweden.

For Mr Handley attracting participants from afar is one of the event’s strengths. It has always been part of the vision, he said. “To have so many artists come from so many different countries is fantastic.”

One of those international artists took out the exhibition’s major sculpture award this year: Peter Lundberg, from the United States, won the $60,000 Macquarie Group Sculpture Prize for his large bronze piece titled Ring.

Mr Handley said Mr Lundberg’s winning piece had a primeval quality to it that had appealed to the judges.

“You feel it in in your guts,” he said of the massive bronze loop which looms out of the sand on Tamarama Beach like a prehistoric shark jaw.

Mr Lundberg, who has studios in Beijing, China and Vermont, USA, has become only the third artist in 18 years to receive the major award twice. He won the event’s 2012 major sculpture award, the $70,000 Balnaves Foundation Sculpture Prize, for his piece ‘Barrel Roll’. The large concrete monument was installed in Sydney’s Royal Botanic Gardens as part of the prize.

Other international artists exhibiting include Argentine Alejandro Propato, whose Permanent Sunrise is the largest sculpture in this year’s event. A 45m long installation over the sand at Tamarama Beach, it is made up of 6km of brightly coloured nylon line.

Toshio Iezumi, Professor of Science and Art at the Kurashiki University in Japan, is a regular participant in the annual event and is back this year with a partly transparent free standing float glass installation. Titled m.140901 it shimmers against the backdrop of the ocean and Bondi beach.

Australian artists too are well represented. Kerrie Argent from Western Australia won The Waverley Council Mayor’s prize of $5000 for her sculpture Overconsumption. Ms Argent’s work drapes in brightly coloured organic-looking mounds across the rocks on the walk between Marks Park and Bondi. It is created using 80,000 recycled plastic bottle tops which are joined by 185,000 cable ties.

Last year’s prize winner, Stephen King is exhibiting again with another tall timber construction, this one at 10m high titled ‘Folly’. Local design collective, Cave Urban, have also upped the height stakes, with their ‘save our souls’ a 1.24 metre high tower of bamboo, steel, rope, concrete and LED lights.

In announcing the prize winner, New South Wales Premier Mike Baird renewed government support for the event announcing a $1.2 million commitment for the next four years.

“The exhibition along Sydney’s iconic Bondi to Tamarama coastal walk is going from strength to strength and plays a major role in increasing the State’s appeal as an international arts and cultural destination” he said.

The first international exhibition, Sculpture by the Sea Aarhus in Denmark, was launched in 2009 under the patronage of the Crown Prince and Crown Princess of Denmark. It takes place every two years the next event in June 2015.

Sculpture by the Sea in Bondi is free and open to the public 24 hours. It continues till November 9.