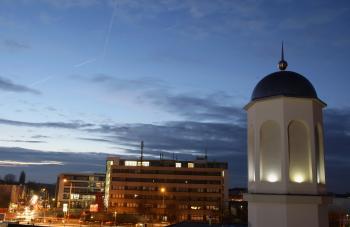 A minaret stands illuminated over the Khadija mosque on Dec. 3 in Berlin, Germany. A recent referendum in Switzerland, in which 57 percent of respondents voted for a ban on the construction of minarets, has sparked a debate across Europe over attitudes to (Andreas Rentz/Getty Images)
Europe

By Jasper Fakkert
Print
A referendum in Switzerland on the ban of minarets in the country, has caused shockwaves throughout Europe, stirring sentiments of concern over the position of Islam in European culture.

Though minarets—the distinctive towers placed on mosques—currently number less than a handful in Switzerland, the Swiss People’s Party (SVP) initiated the referendum, which resulted in 57 percent of the population voting against the construction of new minarets.

In Turkey, which has Europe’s largest Muslim population, Prime Minister Tayyip Erdogan said in an address to his political party that the referendum is a reflection of the increased extreme waves of nationalism in Europe. He added that Islamophobia is a crime against humanity, according to Turkish media.

Most Western European countries have also reacted by expressing discontent with the referendum. French Foreign Minister Bernard Kouchner has called the ban “scandalous,” and the head of the Vatican Council on Migration said the referendum is “a hard blow against freedom of religion and integration.”

Muslims represent around 5 percent of the Swiss population and are the third largest religion in the country.

In the Netherlands, a country traditionally known for freedom of religion, the issues of Islam and integration have been much debated topics for years. Forty percent of the population said that they would vote in favor of a prohibition of minarets if a referendum was to be held, according to a survey by Dutch research institute NPS.

Geert Wilders, leader of the Dutch political party, Party for Freedom (PVV), was quick to respond to the outcome of the referendum by congratulating the Swiss. He commented, “What can be done in Switzerland should also be able to be done here.”

Professor in Islamic European studies at the VU University in Amsterdam, Thijl Sunier, says that after the 9/11 terrorist attacks, many European governments exerted increased control on the lives of Muslims. But Sunier also noted that the integration debate actually started earlier.

“The roots have to be found sooner. The question that was asked throughout Europe in the ’90s was, ‘Does the Islam fit into our society?’” said Sunier.

According to Sunier, the debate now oftentimes revolves around symbolic phenomena, such as the wearing of the headscarf by Muslim women or the minaret on a mosque, with strong opinions both in favor and against.

“It is of course very easy to make the emotion that exists the central point of the discussion,” says Sunier.

But according to Sunier, how European governments handle these issues includes the constitution, which prohibits such bans, because it affects the freedom of religion.

“This is a dangerous backslide for religious freedom in a country that prides itself on being a haven of freedom and considers religious tolerance a basic element of its founding constitution,” said Jennifer Windsor, executive director of Freedom House in a press release.

Swiss President Hans-Rudolf Merz told Euronews only time will tell if anger at the vote will get stronger or abate.