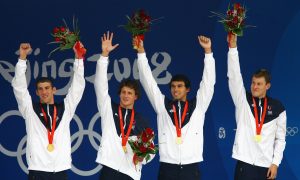 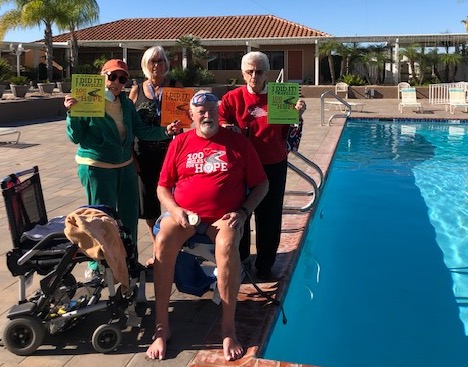 Charlie Parker is a United States Navy veteran. He swam 100 miles in 89 days for the American Legion. (Courtesy of Charlie Parker)
People

Swimming 100 Miles for the American Legion

Social distancing and lockdown measures have made charitable functions such as marathons, galas, and other fundraising events more difficult, if not impossible to hold. At the same time, the financial needs of nonprofit organizations haven’t gone anywhere. Fortunately, the good Samaritans among us haven’t stopped caring. Charlie Parker of Murrieta, California, is one of them. He is 75 years old and largely bound to his wheelchair—but that didn’t stop him from swimming 100 miles for his fellow veterans.

Parker joined the U.S. Navy on April 21, 1967, and was an anti-submarine warfare technician until he left the Navy in 1971. During his service, he earned the Navy Commendation Medal for saving a child’s life in San Diego. He continues to give back and joined the American Legion in August 2020 in an effort to help veterans and do good in his community.

A Need to Serve

After a series of accidents, Parker developed a condition known as bilateral drop foot, which necessitated braces on his feet. He can now walk short distances, but most of the time, he requires a wheelchair. Despite his condition, he is also the primary caregiver for his wife, who suffered a stroke in 2016. Nevertheless, Parker still felt a need to serve.

He wanted to participate in the 100 Miles for Hope campaign organized by the American Legion, the country’s largest veterans service organization, to raise money for the organization’s Veteran’s and Children’s Foundation, which helps military families who are struggling with the pandemic, natural disasters, and unemployment.

But he knew he would have to get creative.

In early August, Parker started swimming at least a mile a day five days a week. As a result of his injuries, he swam using only his arms with a float between his legs. He knew that swimming the distance would be an unusual feat, and he wanted to set an example for people to both exercise and become more involved in the community. A sign on the back of his wheelchair alerted others to the challenge, and he even had “100 Miles” shaved on his head to raise awareness and funds for veterans in need.

Parker has been a passionate swimmer since he was a kid. When he was in second grade, he suffered from rheumatic fever. While other kids played basketball and football, he found himself on the sidelines.

His mother, who worked as a lifeguard during the summers at their community pool, taught him how to swim, and he earned his Red Cross junior lifesaving badge. In high school, he taught swimming at his local YMCA and swam and competed.

“I’ve always been more of a long-term endurance swimmer rather than sprinter,” Parker said.

“During the course of my life, I’ve swum a little over 6,000 miles, which is actually equivalent to going from San Diego to Honolulu back to east of Denver, Colorado.”

Despite the total amount of miles he’s completed in his lifetime, his wife isn’t very impressed, Parker joked.

He finished his 100-mile swim challenge on Oct. 30, 2020. With the exception of the lift chair at the pool not functioning on occasion, the challenge went smoothly.

The feat took him a total of 89 days, and he completed the challenge with 11 days to spare.

To the best of his knowledge, he is the only person to swim the American Legion’s 100-mile challenge.

The week before completing his swim, he also participated in a walk to end Alzheimer’s and was joined by about 40 people in the community.

“I’ve got an amazing group of friends that support me in almost anything I do. I always say I don’t have friends, really, I just have people that follow me out of morbid curiosity to see what I’m going to do next,” Parker said.

Parker’s original goal was to raise money and awareness for veterans in need. Knowing that approximately 20 veterans commit suicide every day motivated him greatly to bring attention to veterans’ issues, and being able to help even just a little brought him immense satisfaction.