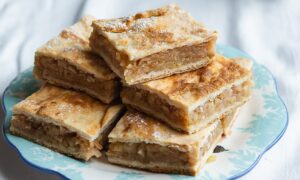 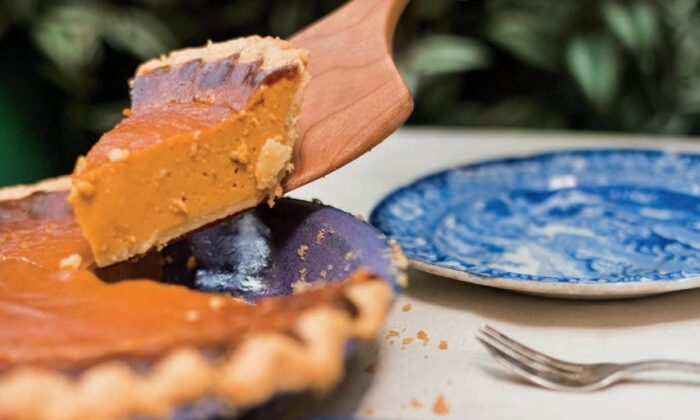 Pumpkin pie gets the top billing at Thanksgiving, but I have a soft spot for sweet potato pie. Some people expect it to have a starchy texture, but the secret to making a really good one is to roast sweet potatoes with their skins on—protecting the flesh from drying out in the high heat—until the starches have broken down and deeply caramelized. The end result is a deeply satisfying custard pie with a molasses-y tang.

Prick the sweet potatoes all over with a knife, wrap them in foil, and roast for at least 1 hour, or until you can easily poke a hole in them with the handle of a wooden spoon. Remove from the oven and allow to cool, then remove the flesh from the skins and mash the flesh. Measure 1 1/4 cups to use for this recipe; save the rest for another purpose (I like to eat it with butter, sea salt, and a pinch of allspice and black pepper).

In a large bowl, whisk together the brown sugar, nutmeg, ginger, and salt. Whisk in the eggs and mashed sweet potato. Gradually whisk in the evaporated milk, cream, and vanilla.

Place the par-baked crust on a baking sheet and pour in the filling, making sure to scrape the entire contents from the sides of the bowl into the pie. Gently cover the crimped crust with a strip of foil or a pie crust protector.

Bake on the lowest rack for 10 minutes, then reduce the heat to 350 degrees F and bake for 35 minutes more, or until the surface has turned a warm brown color and the center of the pie has puffed up.

Transfer the pie to a cooling rack and allow the pie to cool for at least 30 minutes before serving. Serve the pie warm or at room temperature. It will keep for up to 5 days, covered, in the fridge.

It’s abundantly clear that I have a passion for butter crust, and if you only use one of my pastry dough recipes, I hope it is my butter pastry dough.

Stir the sugar, salt, and water together in a small bowl until the sugar and salt are fully dissolved. Place the bowl in the freezer—the liquid needs to be ice cold before it is added to the dough.

Put the flours in a large bowl and dump the butter into the flour. Toss to coat the pieces of fat in the flour. Working quickly, use your thumbs and index fingers to squeeze each chunk of fat into a thin sheet, between 1/8 and 1/4 inch thick. Shake the contents of the bowl to ensure the sheets are well-coated in flour.

Sprinkle the ice-cold sugar-salt solution over the fat and flour. Use your fingers to lightly toss the contents of the bowl around to disperse the liquid.

Squeeze the shaggy mess with your fists, repeatedly and quickly, until the chunks get bigger and more cohesive.

At first it will be crumbly and seem as if it won’t come together, but with continued compression, you can begin to make two mounds of dough of roughly equal size. Flatten your mounds into 1-inch-thick disks.

How to Roll a Dough Sheet and Make a Bottom Crust

Prepare a clean, dry, nonporous surface by sprinkling it with the flour.

Place a disk of dough on top of the floured surface and sprinkle it with a little more flour. Place your rolling pin in the center of the dough and roll away from yourself with firm, even pressure, but not enough force to squish the dough. As you approach the edge of the dough, use a little less pressure so that it doesn’t become too thin on the edges.

Rotate the dough about 45 degrees. Place the rolling pin at the center of the disk and roll away from yourself once again.

Continue to rotate and roll, adding more flour as needed to prevent the dough from sticking to the surface and/or the rolling pin, until you’ve rolled the dough to approximately 1/8 inch thick. If the dough starts to split on the edges, you can gently press it back together before continuing to roll it out. The finished sheet of dough should be roughly 12 inches in diameter.

Transfer the sheet of dough into a pie pan, centering it so that you have at least 1 inch of extra dough all the way around the edges of the pan. While transferring, support the dough with your fingers spread out, in order to distribute the weight and prevent breakage.

Lay one half of the dough along the center line of the pie pan, then fold the other half over so the silicone mat is lying over the top, then remove the mat.

Once the sheet of dough is in the pan, ease it into the corner where the base of the pan meets the sides. In order to do this without stretching or breaking the dough, lift the edge of the dough with one hand to allow it to fall into place while gently pressing it into the corner with the other.

How to Make a Crimped Bottom Shell

Shift your nondominant hand so that your thumb is now in the spot that your nondominant index finger just occupied, and repeat the same motion. Continue all the way around the edge of the pie. The rounded edges that result from this method prevent the burning that would otherwise happen if you pinched the dough into thin, sharp points.

Line the pie shell with a circle of parchment paper. Add dry beans, uncooked rice, or pie weights to reach about two-thirds of the way up the sides of the crust.

Bake the shell for 20 minutes. Let cool, then carefully remove the pie weights and parchment paper.

Excerpted with permission from “Pie for Everyone” by Petra Paredez. Published by Abrams.