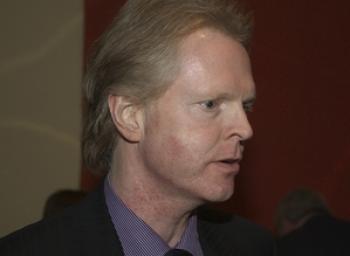 STOCKHOLM, Sweden—Mr. Hans Rothenberg, a member of the Swedish Parliament, attended the second show of Shen Yun Performing Arts at the Cirkus Theater in Stockholm on Wednesday March 18.

Mr. Rothenberg is originally from Gothenburg, which is in the southwest of Sweden, and he has a background in business development, but now he is a member of the Swedish Parliament for the Conservative Party, where he is involved in both cultural and business related issues.

Mr. Rothenberg has cultural interests of his own and was once a guitar teacher, and he also has an interest in drawing. He shared his impressions of the show during intermission.

"It's a different show. I don't think I've seen anything like it."

He was most impressed with the coordination of the dancers, and also the energy and demeanor they portrayed.

"It's completely different from what I'm used to from other Chinese shows. It's not the kind of thing we normally see coming out of China these days."

Last year, the Chinese Embassy in Sweden tried to stop Shen Yun from performing in Sweden. Their method was to try to influence politicians in Linköping and Stockholm not to see the show. This had the opposite effect and led to widespread support of the show from the Swedes, both on a public and private level, who would not tolerate such an attack on the freedom of expression.

"I don't understand why the Chinese regime fears this show. It's traditional culture. But then, of course, I live in a democracy, and I support human rights. Still I don´t see why they have such an adverse attitude to this show."

The traditional arts in China have long suffered under communist rule, and unfortunately Shen Yun cannot perform in China, and the Chinese people are not able to see this expression of the best of traditional Chinese arts.

Read this article in Swedish