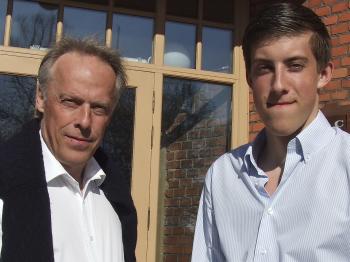 Sweden’s Youngest MP on Shen Yun: ‘Everyone should go and see this show’

By Epoch Times Staff
Print
STOCKHOLM—When Anton Abele was elected to the Swedish parliament in 2010, aged 18, he was the youngest MP ever elected in Sweden. He became famous for his commitment to stop street violence, and started an organization in 2007 after a street killing in Stockholm that received much media attention.

Mr. Abele came to see the Shen Yun Performing Arts show on Sunday with his father and sister, and saw, among many other things, a picture of violence in China today, where it is illegal to even own the books of the spiritual practice Falun Gong.

“We all have to stand up for human rights and freedom of speech,” he said.

During the 60-year rule of the Chinese Communist Party (CCP), several campaigns, such as the Great Cultural Revolution, have targeted and destroyed much of traditional Chinese culture.

His sister, Celine Abele, liked the number about the plum blossoms [Plum Blossom] very much. The plum blossom is loved by the Chinese people, and although it is small and fragile, it is also very resilient and can even bloom in snow.

“I loved it, it was very beautiful,” Ms. Abele said.

The young MP's father, Gunnar Abele, who is a dentist, found his favorite in the scene with the playful monks, [Little Mischievous Monks] who interacted with the audience.

“The monks, that was fantastic, it was fun. It showed that there are things going on in a monastery that you don't know about,” he said.

Apart from the young monks, who had their own fun when the abbot looked the other way, Gunnar Abele also liked the last scene of the show.

“It was a very strong message about human rights in all countries, not just Sweden, but also in China. This is important for everybody.”