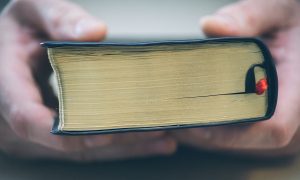 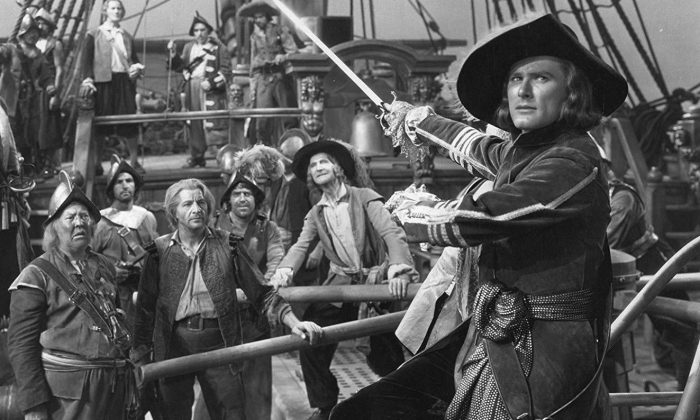 Swashbuckler: Lessons in Morality From Peter Blood, the Pirate

For years, mention of the novel by Rafael Sabatini (1875–1950) about pirates in the Caribbean would pop up in my reading. These writers draped garlands of praise on “Captain Blood,” yet I never gave the novel even the courtesy of a glance. From its title alone, I figured this tale of a pirate on the high seas would offer little more than a hackneyed plot, cardboard characters, and overwrought prose.

At any rate, I was recently browsing my copy of James Mustich’s splendid collection of brief reviews, “1,000 Books to Read Before You Die,” when up popped this line from his take on “Captain Blood”: “The book dares you to put it down. You won’t.”

That line sent me off to the public library in search of Sabatini.

And Mustich was correct. I picked the book up, and I didn’t put it down. After all these years, I read “Captain Blood.”

No, not read—I plunged through this romantic saga with all sails raised and a strong wind at my back.

As good a name for a doctor as a pirate, Peter Blood, a physician and former soldier of fortune, is unjustly accused of treason during the turbulent reign of England’s James II. A kangaroo court finds the innocent Blood guilty of trying to overthrow the king, and he is shipped off as a slave to Barbados, where his medical talents soon win the respect of the ailing governor and a modicum of freedom for Blood. He also meets and feels a growing affection for Arabella Bishop, the niece of the nefarious Colonel Bishop, a slave owner with powerful connections.

During an attack by Spanish raiders on the colony, Blood leads a group of fellow slaves aboard the Spanish ship, seizes control of this vessel, turns the guns on the Spanish soldiers and sailors returning to the boat after their night of pillaging and murder on shore, and embarks on a career of piracy.

Blood targets Spanish ships, gains renown among foes and friends for his daring and chivalry, and soon becomes a legend among all who sail the seas in his part of the world. As the blurb on the back of the book rightly claims, “’Captain Blood’ is a classic swashbuckler—filled with swordplay and adventure.”

But “Captain Blood” deserves a reading for reasons other than its storyline, vivid characters, and robust writing. If we take the time to scrutinize the character of Peter Blood, we find that he embodies the four cardinal virtues: prudence (practical wisdom), justice (morality), temperance (moderation), and fortitude (courage).

A Man of Virtue

Blood’s courage is never in question. Whether confronting false accusations in a courtroom, rushing to the defense of a young girl in danger of violation by a Spanish soldier, or coolly commanding a ship under fire, he stands fast in the face of danger.

In judging others, including his enemies, Blood takes a temperate view, recognizing human foibles and extending mercy even to those who deserve a noose. Several times, for example, he has the opportunity to kill the vengeful and vicious Colonel Bishop, but he foregoes that pleasure, in large part because of his affections for Arabella.

Beset again and again with demands from his crew to take revenge on certain captured enemies, Blood nevertheless weighs the circumstances on the scales of justice. At one point he is tempted to do otherwise, thinking “he would cast out the maudlin ideals by which he had sought to steer a course; put an end to this idiotic struggle to make the best of two worlds.”

But morality is bred too deep within Blood’s heart, rendering it impossible for him to become “as bowelless, as remorseless, as all those who deserved those names” of thief and pirate.

Prudence is another of Blood’s virtues as a leader. He goes to extraordinary lengths to avoid sacrificing the lives of his men. When they find themselves beset by impossible odds—outnumbered on the sea, unable to escape the guns of a Spanish fort—it is Blood who thinks like a fox, crafts plans to fool the enemy, and leads his men to safety.

In addition, “Captain Blood” contains other gifts worthy of contemplation and relevant to our time.

A Man for All Times

Some among us try to bring down our enemies by inventing labels for them: racist or sexist, fascist, or communist. Blood finds himself falsely smeared as a traitor, but his worst experience with verbal branding occurs when he captures a Spanish ship. He is astounded to find Arabella Bishop onboard, a prisoner of Admiral Don Miguel de Espinosa. Because of the twisted truths she has heard about Peter Blood, his beloved Arabella calls Blood “a thief and a pirate.” Later, agonizing over this label from the woman he secretly loves, Blood thinks: “She had no charity for him, no mercy. She had summed him up, convicted him and sentenced him in that one phrase.” We see this same tactic used daily by our politicians and by some in the media.

Furthermore, Peter Blood is a gentleman, a word that nowadays finds little employment. He is imbued with those qualities we associate with the Founding Fathers, with generals like Robert E. Lee and George Marshall, and with politicians like Daniel Patrick Moynihan and Robert Taft. Blood defends the defenseless, treats women with respect, and grants his defeated foes more dignity than they deserve. Like all gentlemen, he is a man of his word, even when his promises prove costly.

Finally, Peter Blood speaks with a candor missing in our politically correct culture. His is not a brutal or cruel honesty, except to those who deserve a rebuke. Instead, he uses logic, a cool demeanor, and considerable rhetorical skills to make his point. Whether addressing his band of buccaneers or a war council of French naval officers, he speaks what he regards as truth.

“Captain Blood” captures the spirit of the late 17th century, deftly grafts the speech of that time to our own, and tells a grand story. It is historical fiction at its best.

Most important of all, “Captain Blood” reminds us of what we might be and how we might behave. By reading this novel, all of us, young and old, can reacquaint ourselves with heroism, gallantry, and the classical virtues. We may even discover in Peter Blood’s tale a sextant and compass to navigate the rough seas of our own lives.