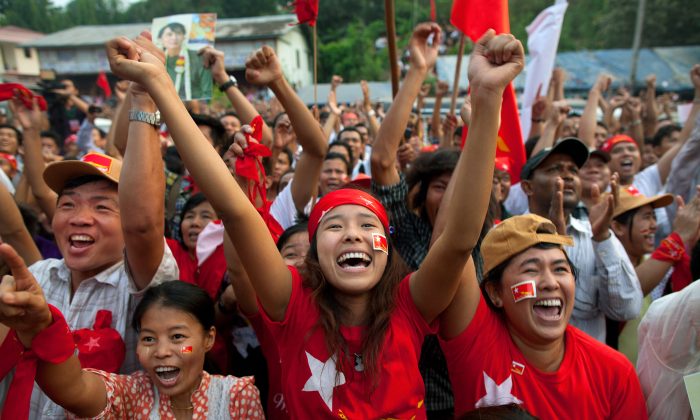 YANGON, Burma/Myanmar—The party of opposition leader Aung San Suu Kyi claimed victory Monday in virtually every seat in four states where results of Burma’s historic parliamentary election were known, signaling a sweep that could give it the presidency and further loosen the military’s stranglehold.

The announcement at the headquarters of the National League for Democracy set off a new round of jubilation among the party’s red-shirted supporters, who already had been celebrating the result of Sunday’s vote.

Even without official results, it was clear that the Union Solidarity Development Party was facing a rout. The party is made up former junta members who ruled the Southeast Asian country for a half-century and as a quasi-civilian government since 2011. Many of its leaders conceded personal defeats in their races.

Although the government’s Union Election Commission did not announce the outcome of the Yangon races, the NLD has stationed representatives at counting centers and kept its own tallies. The election commission has been slow in releasing the numbers.

The United States congratulated Burma on the election but noted that more work remains ahead on the country’s road to democracy.

Aung Kyaw Kyaw, a 29-year-old pharmacist, said he didn’t vote for the ruling party because “they were only former military people. If I voted for them, that means I am asking my own enemy to come back into my life.”

Suu Kyi, the Nobel Peace Prize laureate and pro-democracy icon, had urged supporters earlier in the day not to provoke losing rivals who mostly represent the former junta in the country also known as Burma.

Hours before the Yangon announcement, party spokesman Win Htein said the NLD had secured about 70 percent of the vote counted by midday. Another spokesman, Nyan Win, put the number at 90 percent.

“We will win a landslide,” Nyan Win told The Associated Press.

If those figures are confirmed by official results, it would mean that Suu Kyi’s party would not only dominate Parliament, but could also secure the presidency despite handicaps built into the constitution.

“I want Mother Suu to win in this election,” said street vendor Ma Khine, using a widely used affectionate term for the 70-year-old party leader. “She has the skill to lead the country. I respect her so much. I love her. She will change our country in a very good way.”

The NLD has been widely expected to finish with the most seats in Parliament. A two-thirds majority would give it control over the executive posts under Burma’s complicated parliamentary-presidency system, which reserves a quarter of the 664 seats for the military.

The military and the largest parties in the upper house and the lower house will each nominate a candidate for president. After Jan. 31, all 664 legislators will cast ballots and the top vote-getter will become president, while the other two will be vice presidents. A massive majority in Parliament would allow the NLD to take the presidency and one of the vice president slots.

Capturing the presidency and Parliament would give the NLD power over legislation, economic policy and foreign relations, although the constitution guarantees that the military will keep control of the ministries of defense, interior and border security. Also, the military will be able to legally block constitutional amendments.

A constitutional amendment bars anyone with a foreign spouse or child from being president or vice president, meaning Suu Kyi is not eligible for those posts. Her two sons are British, as was her late husband.

Suu Kyi has said, however, that she will act as the country’s leader if the NLD wins the presidency, saying she will be “above the president.”

As he listened to Suu Kyi’s speech, 71-year-old Khin Maung Htay described his joy and added: “The whole country is happy.”

“I think she is a perfect leader for our country and a woman of perfection,” he said.

“There are some imperfections—to put it mildly. There’s also no denying the rather dramatic change we’ve seen inside of Burma,” he said in a statement to reporters.

U.N. Secretary-General Ban Ki-moon congratulated Burma’s voters for their “patience, dignity and enthusiasm,” according to a statement from the office of his spokesman.

The junta, which seized power in a 1962 coup, annulled the results when Suu Kyi’s party won a sweeping election victory in 1990. A new vote was held in 2010, but the opposition boycotted it, calling the election laws unfair.

The USDP won by default and took office in 2011 under President Thein Sein, a former general who began political and economic reforms to end Burma’s isolation and jump-start its moribund economy. But the USDP was battered in a 2012 by-election in which the National League for Democracy won 43 of the 44 parliamentary seats it contested.