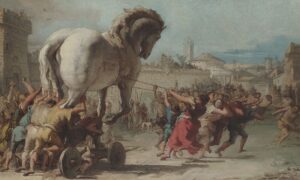 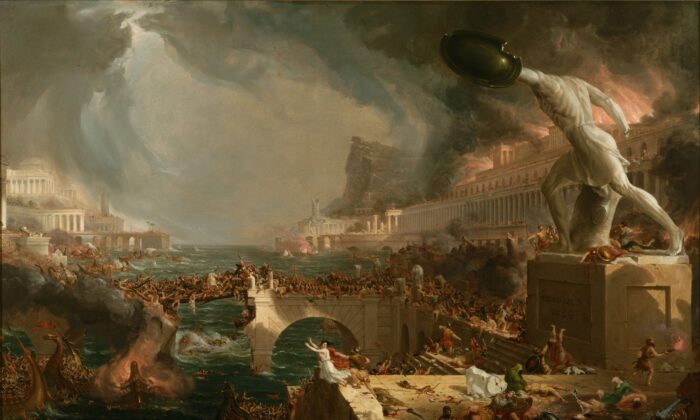 Sustaining Our Empire: Thomas Cole and ‘The Course of Empire’

Thomas Cole was a 19th-century American painter who became popular for his landscape paintings. Born in England, Cole moved to the United States at a young age, and America is where his love of art developed.

As a young man, Cole fell in love with the beautiful wilderness of New York’s Catskill Mountains, where he would later establish a studio. The Catskills would serve as inspiration for many of his paintings.

During this time, he met Luman Reed, a successful merchant who opened a private art gallery in the area. Becoming Cole’s patron, Reed commissioned him to produce a series of five paintings that would later be called “The Course of Empire.” These became some of Cole’s signature works.

According to ExploreThomasCole.org, Cole wrote the following about his ideas for the series in a letter to Reed:

“A series of pictures might be painted that should illustrate the History of a natural scene, as well as be an Epitome of Man—showing the natural changes of Landscape & those effected by man in his progress from Barbarism to Civilization, to Luxury, the Vicious state or state of destruction and to the state of Ruin & Desolation.

“The philosophy of my subject is drawn from the history of the past, wherein we see how nations have risen from the Savage state to that of Power & Glory & then fallen & become extinct…”

Cole felt that this series embodied the very “mission” or purpose of an artist:

“I have been dwelling on many subjects, and looking forward to the time when I can embody them on the canvas. They are subjects of a moral and religious nature. On such I think it the duty of the artist to employ his abilities; for his mission, if I may so term it, is a great and serious one. His work ought not to be a dead imitation of things without the power to impress a sentiment, or enforce a truth.”

The Course of Empires

The series “The Course of Empire” consists of five paintings that depict five stages of a civilization’s evolution.

The first period of an empire is a primitive state. “The Savage State” is a landscape painting that depicts nature as the dominant force. The sky looms heavy over the earth, where foliage thrives uninterrupted. The figures are dwarfed by the enormity of their environment, and they live off of the land and use crude materials to hunt.

The empire’s second period is the emergence of some civilization. In “The Arcadian or Pastoral State,” Cole depicted a landscape with more organization and order than in “The Savage State.”

The figures don’t appear to be dominated by nature here but, instead, live in harmony with it. They dance, fish, domesticate animals, and there’s a temple in the background, which suggests that they worship and have faith. The sky is clearer here than in “The Savage State.”

The third period of an empire is the apex of a culture, as shown in Cole’s “The Consummation of Empire.” Nature is almost completely absent from this depiction. Instead, the figures have dominated nature and civilization is shown at its height.

There are temples and statues representing the gods, extravagant dress and adornment, and order. All are surrounded by beauty, no one seems to want or need anything, and the sky is clear.

The fourth period is full of turmoil. In “Destruction,” Cole depicted a moment of mayhem. A tumultuous sky blocks the light of the sun. The temples that may have once housed the gods are on fire. People are scurrying or fighting; all are in a state of unrest.

There’s a large headless statue at the top right of the composition. In warlike fashion, this statue lunges forward and extends its broken shield toward the sky.

The final period of the empire is its demise. In “Desolation,” Cole depicted the ruins of the once great nation. All of the material comforts that its inhabitants created for themselves are gone, and now—in the twilight—the moon illuminates the nation’s destruction.

As the political divide in our country grows, there is noticeable unrest bubbling below the surface. We seem to be coming dangerously close to what Cole presented as the period of destruction.

I have to ask: Where is our great nation headed? Is there a way to extend and potentially sustain into the future the truth and beauty of an empire’s consummation?

Let’s look closer at the period of destruction to see what its characteristics are, and then let’s see if any of the earlier depictions in the cycle offered by Cole provide us with possible solutions.

There are three things that stand out for me in “Destruction.” First, the sun is blocked by clouds. Second, the temples are on fire. And third, the headless statue lunges forward with its shield pointed at the sky.

I see the sun as representing that which illuminates what is otherwise dark. In other words, the sun is symbolic of wisdom. Here, wisdom is blocked by smoke coming from the burning temples. I believe the temples here to be houses of this empire’s gods, and their destruction suggests the obscuring of wisdom.

One could argue, however, that maybe these buildings are not temples but government buildings, bathhouses, dwellings, businesses, and so on. Even if this is the case, historically a nation’s gods were integrated into all aspects of society.

The fact that these buildings are burning represents—for me—a loss of the divine element that would have once been integrated into society, and consequently a loss of the wisdom associated with divinity.

The statues of gods that were present in the previous painting in the series are absent. Instead, there’s the lunging, headless statue with his shield pointing to the sky.

The head is often associated with wisdom, so the fact that the head is missing from this statue, and the fact that statues of the gods are now absent, suggests that the empire has moved from a belief in the wisdom granted by gods to one that discards wisdom and belief in gods.

Also, the figure lunges forward and doesn’t protect itself with its shield but points the shield toward the heavens, as if that is where it directs its anger.

Is it that the figure wants to resist or attack the heavens in its headless irrationality? And is this desire to resist or attack partly responsible for the destruction that the empire now faces? Are the inhabitants of this empire at each other’s throats because they have forgotten heaven’s dictates? Does a resistance toward or an attack on the heavens and the wisdom it represents result in destruction and eventually desolation?

In “The Arcadian or Pastoral State,” figures are depicted in harmony with nature, and the temple in the background suggests worship and faith. These are the precursors to the abundance that’s shown in “The Consummation of Empire.”

Are harmony, worship, and faith necessary to increase an empire’s longevity and avoid destruction? Are these questions predicated on a moral foundation with which every nation, at some point, struggles?

How can we repopularize morality so as to reinvigorate the harmony, worship, and faith that will serve as the foundation of our empire’s continued sustenance and even flowering?