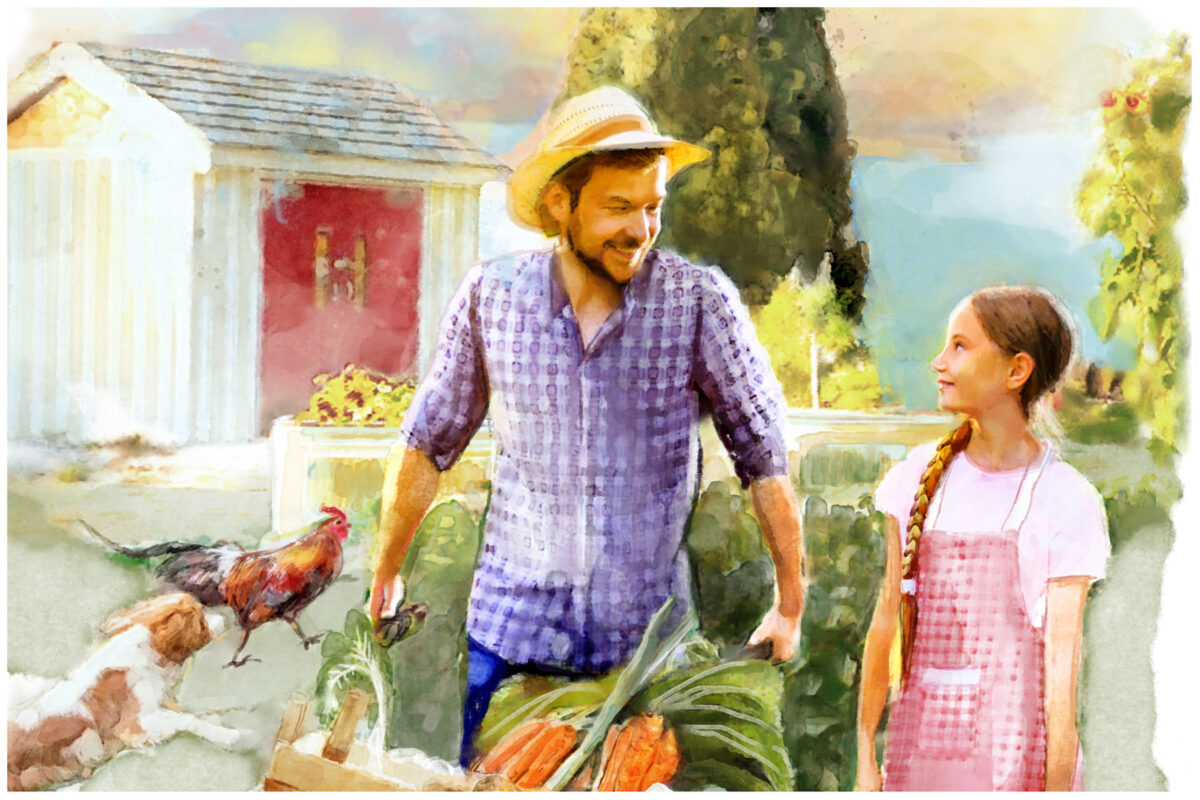 Homesteading offers connection with nature, the family, and with the broader community. (Biba Kayewich)
Family & Education

Surprised by Hope: An Afternoon With Homesteaders

Start with a bright October sun and a blanket of blue sky. Add nearly 150 vendors and their wares, 50 speakers, and more than 5,000 participants, including several hundred children.

Throw in a few dogs, some chickens and goats, enthusiastic volunteers, lots of smiles and laughter, the scent of popcorn, freshly brewed coffee, and handmade soap, and you have a picture of the 2022 Homesteaders of America (HOA) Conference at the Warren County Fairgrounds in Front Royal, Virginia.

Once you make your way past the grassy parking areas jammed with hundreds of cars, vans, and pickup trucks, you enter a wide, flat expanse covered with the tents of vendors, pathways teeming with veteran and amateur homesteaders, and picnic table pavilions for taking a load off your feet, eating, and conversing with friends and strangers.

Those who attended previous conferences—this year marks the fourth event—renew friendships, and newcomers find themselves drawn into talk with perfect strangers. The spacious building for the conference’s speakers fills with people looking for advice on topics from working dogs to living a nontoxic life, practical food storage, composting, or catching a honeybee swarm. And right from the start, people you’ve never met in your life are smiling or nodding at you, as if you’re friends passing each other on the streets of a small town.

In the colorful 52-page guide to the conference, founder Amy Fewell writes: “Our goal here at HOA is to help you in every way, but to also make an impact on our country, and beyond. To be a voice and a light where there once was no voice for this community and way of living.”

Believe me, there’s now a voice for this community, and you can hear it loud and clear this afternoon.

To help those new to the homesteading concept, and to sharpen up the knowledge and skills of veterans, the vendors play a key role. Some are here directly selling their goods, while others, particularly those who offer larger items such as electric fencing or farm equipment, hand out brochures about their products or take orders for delivery. All of these folks clearly know their stuff.

At Bee Guy Supplies, for example, the woman operating the booth, Mrs. Crow, fills me in on the reasons why they sell special hives for carpenter bees, explaining that those bees don’t make honey but they do help open up certain flowers for the honeybees. Her husband, Brian Crow, who owns this company operating out of Londonderry, Ohio, first became interested in beekeeping 14 years ago. He attended a lecture about bees at a garden club, became fascinated with the topic and friends with the speaker, and for eight years has owned a farm, now home to 40 hives. He and his family operate a store on the premises selling honey and beekeeping supplies. Every third Thursday of the month, Bee Guy hosts a seminar where different apiarists share information and teach others about beekeeping. Anyone is welcome to attend.

In addition, the family raises quail and chickens for meat and eggs, and rabbits.

“Everyone shares,” says Mrs. Crow. “And they want others to learn.”

Which was true of every vendor I spoke with that day.

Jeremy Kroening is an assistant editor at the online Homestead Living Magazine. “About 80 percent of our articles are “how-to” pieces,” he says, “and the rest are about the homesteading lifestyle.”

He reports a huge surge of visitors to the site in the past couple of years because of COVID-19, with lots of people especially interested in healthier living and growing their own food. Though he, his wife Amanda (a professional weaver), and their three daughters, ages 9, 7, and 6, live in Saint Paul, Minnesota, Jeremy does more than edit a magazine about homesteading. The family bought an empty lot next to their property in the city, where they put in a 20-foot by 20-foot vegetable garden. Someday, they hope to add fruit trees and a chicken coop.

“The most appealing thing about homesteading for most people is the connection to the natural world,” he tells me. “As for me, I think it’s important we have a better understanding of taking care of each other and the world we live in.”

Like Jeremy Kroening, other vendors are promoting magazines and websites, and selling books on all sorts of topics, including guides for major disasters.

Most attendees at the conference come seeking wisdom and technical skills they can carry home with them, but Angie and Steve Helton of Paintsville, Kentucky, were here for a different reason.

Both husband and wife have long been attracted to homesteading, in part because they’d grown up on farms. They also got interested, Steve says, because of “the quality of the food and the independence.” Their three children, two daughters and a son, all nurses, are out of school and working, and the couple began laying plans to buy a farm of their own.

Then, as in the case of so many people, COVID-19 hit and threw those plans off-track. Steve contracted the virus, and though he felt few effects from it, he then caught pneumonia. He ended up hospitalized from September 2021 to March 2022, spending most of that time breathing through a trach tube. At first not expected to live, he pulled through and today feels and appears healthy, but their dreams of homesteading have for now been put on hold.

If that was the case, I wondered, then what had brought them to Front Royal?

“We came to experience the community,” Angie said. They’ve attended other conferences—they described this one as being the biggest by far, with many more vendor booths and people—and they’d driven from Kentucky to connect with friends they’d made earlier.

“Everyone here has a common bond,” Steve said.

During my visit, I was fortunate enough to attend part of a lecture by Wyoming resident Jill Winger, founder of The Prairie Homestead, an online site with more than 1 million monthly visits. She told her audience that we live in a time and place where many people look for the easy way and that “our culture has a bias against effort … it equates hard with bad.” The responsibilities that come with homesteading, she said, are an antidote to that attitude.

After explaining that “the adoption of responsibility gives meaning to life,” Winger also reminded her listeners that homesteaders “take on actions that make a huge difference” and that they have a “bigger sphere of influence than they recognize.” Others see what we’re doing, she said, and want to join us.

In an article included in the program, Winger also addresses our culture’s idea of “ease.” She writes: “When you’re a homesteader, a homeschool parent, or a business owner, the buck stops with you. And as enticing as abdicating responsibility might seem, it’s not the answer. Not for me, and not for you.” She ends her brief essay, “So next time you find yourself saying the words, ‘I wish somebody would do something about …’ Friend, consider that someone might just be you.”

That self-reliant, can-do code is probably as good a summation of the homesteading philosophy as we’re likely to find.

Count Me Out … But Count Me In

Unlike all these people, I don’t have any desire to raise chickens, plant large gardens, or milk cows, though I strongly identified with Winger’s remarks about responsibility. My wife and I homeschooled our children, and for most of my life I’ve operated small—make that tiny—businesses.

But despite my lack of interest in becoming a homesteader, I’d go back to next year’s conference in a heartbeat. Here’s why.

As I wandered through this village of vendor tents, I saw several women wearing cross pendants on their throats. Two elementary school girls wearing hijabs were skipping toward an ice cream stand. Black boys and white boys were playing a game of touch football in a nearby field. Old people and young mingled together, and I saw several men and women sitting in one of the shelters who were clearly strangers to one another but were on the way to becoming friends.

And the only mention of politics I heard all afternoon came from a young vendor of chicken supplies, bearded and with a ponytail. I missed the first part of his conversation with a customer, but as I passed, he pointed at a T-shirt for sale on the tent wall and said, “That right there is my political philosophy.” The T-shirt read: “Free Range.”

The entire time I walked those fairgrounds, I felt light-hearted. Here were men, women, and children from all places and walks of life learning, sharing, and having a blast. The bitter divisions we read about every day online were nowhere to be found in this crowd. They were united by a common interest and cause, a desire to make things grow and flourish.

Here, I thought as I walked to my car, is America as it is supposed to be.

Here is America as it can be.