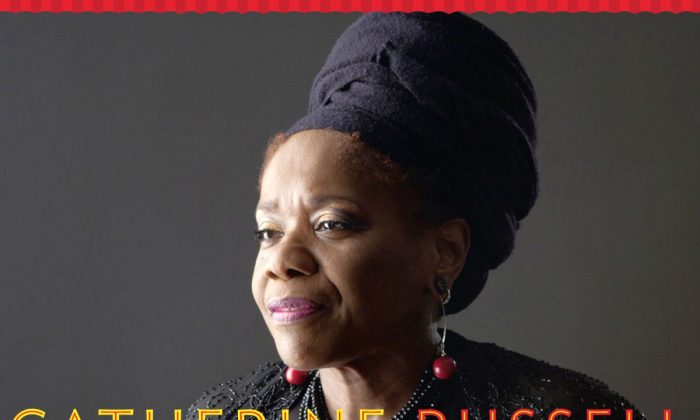 Jazz singer Catherine Russell blew me away when I first saw her perform at the Mohonk Blues on the Mountain Festival. She sang a blues and jazz set with her group and then returned on Sunday morning for a gospel show. Since then, I have been collecting her recordings and try to catch her whenever she is in town.

A native New Yorker, Russell was born into jazz royalty. Her father, Luis Russell, was the longtime bandleader-pianist for Louis Armstrong. (On Catherine’s website, there are photos of her with Satchmo when she was 4 years old.)

Russell has the gift of communicating pure joy.

Her mother, Carline Ray, was also an accomplished musician. A guitarist in the female International Sweethearts of Rhythm jazz band of the 1940s, she held advanced degrees from Juilliard and the Manhattan School of Music.

Catherine Russell has won various music awards, including a Grammy for her appearance as a featured artist on the soundtrack album for the HBO TV series “Boardwalk Empire.” She has also sung backup for a long list of luminaries, including David Bowie, Steely Dan, Paul Simon, and Rosanne Cash.

Russell’s most recent solo album, “Bring It Back” (on Harmonia Mundi’s Jazz Village label), is one I have listened to with pleasure numerous times. Russell has a sunny personality and, like Louis Armstrong, she has the gift of communicating pure joy.

The album is steeped in tradition, and while Russell’s singing may evoke memories of greats like Ivie Anderson in the jazz ballads and Dinah Washington in the bluesier numbers, she is always recognizably herself. Each word comes through clearly, with sincerity, but without any attempt to overdramatize or to create gratuitous effects to show off her voice.

“Lucille” by the singer’s father is an upbeat love song with an irresistible swing. Other nuggets from the past include “I Let a Song Go Out of My Heart” by Duke Ellington, “Strange as It Seems” by “Fats” Waller and Andy Razaf, and “The Darktown Strutters Ball” by Shelton Brooks.

The unhackneyed program contains an obscure but swinging tune by Harold Arlen and Ted Koehler: “Public Melody Number One.”

Russell communicates romantic yearning in “I Cover the Waterfront,” a version that includes the rarely done opening verse and stands in good comparison with Billie Holiday’s recording.

“After the Lights Go Down” is a bluesy tune, sparked by Glenn Patschka’s Hammond B-3 organ; he also did the arrangement. In fact, the tasteful and soulful arrangements on the album are by the singer and the musicians in her excellent group: guitarist Matt Munisteri, trumpeters Jon-Erik Kellso and Brian Pareschi, sax players Andy Farber and Dan Block, and bassist Nick Parrott.

Lovers of jazz, blues, and popular music should not pass up the opportunity to catch Catherine Russell at Birdland, where she will be performing with musicians from the “Bring It Back” CD for five nights, December 15–19.

She will be back with her band to perform in Jack Kleinsinger’s Highlights in Jazz at the Tribeca Performing Arts Center on Thursday, Feb. 4, 2016, at 8 p.m. Also appearing at the concert will be Ted Rosenthal, Warren Vaché, Scott Robinson, and Alvester Garnett.