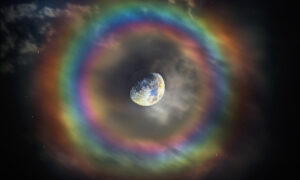 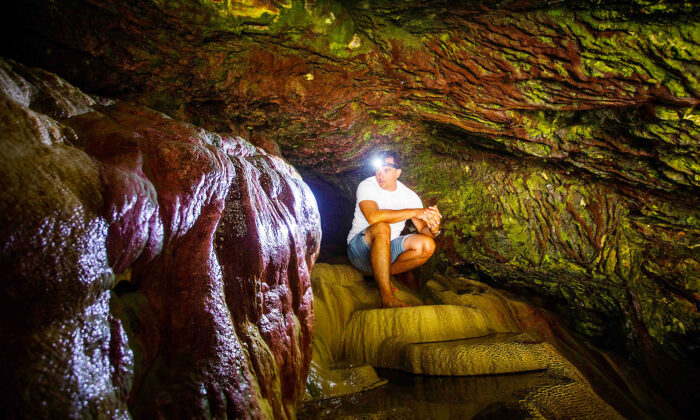 Stunning pictures show inside a rainbow-colored “forgotten” sea cave that is thought to have special healing powers.

The multicolored grotto was once one of Britain’s most mysterious sites and attracted huge numbers of visitors during the 17th and 18th centuries.

The area is named after the cave’s healing waters where pilgrims, cripples, and sick people would make their way to the cave to drink from the “holy well.”

But in recent decades, it has become largely secluded and unknown and most tourists now visiting Holywell, Cornwall, are unaware of its hidden wonders.

The spring water it creates was once described as the “elixir of life” in writings from the 19th century and were said to contain “life healing” minerals that trickled through the cave’s natural limestone.

John Cardell Oliver’s “Guide to Newquay” from 1877 gave a detailed description of the cave from a bygone era.

“It is a somewhat curious place. After passing over a few boulders the mouth of the cave will be reached, where steps will be found leading up to the well,” he wrote.

“This rock-formed cistern is of a duplicate form, consisting of two wells, having a communication existing between them. The supply of water is from above; and this water, being of a calcareous nature, has coated the rock with its earthy deposits, giving to the surrounding walls and to the well itself a variegated appearance of white, green and purple.

“Above and beyond the well will be seen a deep hole extending into the cliff.

“The legend respecting the well is, that in olden times mothers on Ascension Day brought their deformed or sickly children here, and dipped them in, at the same time passing them through the aperture connecting the two cisterns; and thus, it is said, they became healed of their disease or deformity.

“It would seem that other classes also believed virtue to reside in its water; for it is said that the cripples were accustomed to leave their crutches in the hole at the head of the well.

“This well has Nature only for its architect, no mark of man’s hand being seen in its construction; a pink enameled basin, filled by drippings from the stalactitic roof, forms a picture of which it is difficult to describe the loveliness.

“What wonder, then, that the simple folk around should endow it with mystic virtues?”

The spring water has been described as tasting like “cereal milk” and forms shallow pools within the basins, before trickling out from the cave and on to the outside beach.

Unlike other so-called “holy wells” in the UK, the spring water in St Cuthbert’s Cave is washed out twice every day, when the tide comes in and floods the cavern.

Its popularity was also recorded by William Hals in his “History of Cornwall,” which he compiled from 1685 until 1736. In his book he wrote: “The virtues of this water are very great. It is incredible what numbers in summer season frequent this place and waters from counties far distant.”