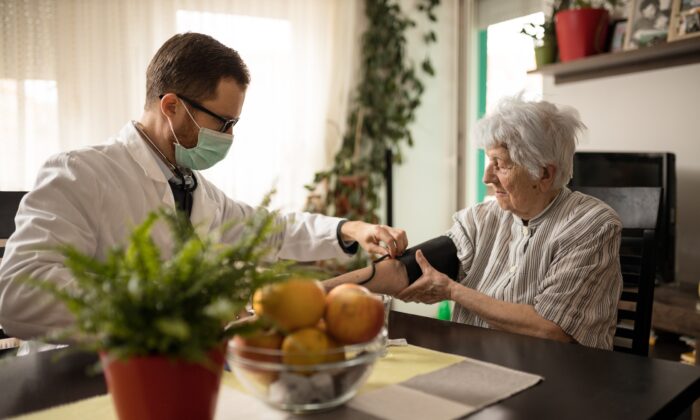 A doctor checks the blood pressure of a patient. (Gligatron/Shutterstock)
Women's Health

A recent study on middle-aged women found that the high presence of per-and polyfluoroalkyl substances (PFAS), also known as “forever chemicals,” was linked with an extra 71 percent risk of hypertension, confirming links between PFAS and hypertension in women.

The study was conducted over 18 years on 1,058 middle-aged women aged 42 to 52. The researchers compared the women’s PFAS levels and found that though some PFAS chemicals posed risks individually, a collection of various PFAS chemicals elevated risks even further.

Women in the top third cohort for overall PFAS concentrations had an additional 71 percent risk for hypertension compared to the baseline.

The researchers suggested that older women were more affected by this risk association than men and younger women.

Hypertension occurs when blood pressure is high and is a major risk factor for cardiovascular diseases. Though it often has no symptoms by itself, over time, it can cause damage to blood vessels, the heart, and kidneys.

The authors found that despite accounting for other factors such as smoking, obesity, aging, and menopause for the participants, PFAS remained a risk association.

“PFAS are known as ‘forever chemicals’ because they never degrade in the environment and contaminate drinking water, soil, air, food, and numerous products we consume or encounter routinely,” said the lead author Dr. Ning Ding from the University of Michigan.

The study recruited women from various racial demographics, including black, Asian, and non-Hispanic white women. All women were at pre- or perimenopausal stages, but all progressed past menopause at the end.

According to the authors, all participants recruited were hypertension-free, but by the time the study was completed in 2017, 470 women had developed hypertension.

Along with the high prevalence of hypertension, 97 percent of Americans also have PFAS in their blood.

Ding mentioned a study that found PFAS is most prevalent in “household drinking water” and “consumed by more than two-thirds of Americans.”

Since PFAS came into use over 70 years ago, it has been found in various consumer products such as non-stick pans, cosmetics, and cleaning products. The chemicals have permeated our daily lives, unable to be broken down, and they accumulate in the body.

Additionally, the team also found 2-(N-ethyl-perfluorooctane sulfonamido) acetate and 2-(N-methyl-perfluorooctane sulfonamido) acetate in participants. These two chemicals are no longer in use. They are not part of the United States Environmental Protection Agency’s (EPA) regional screening but were also associated with significant hypertension risk.

Since the late 2000s, long-chain PFAS with known health risks has mostly been phased out and replaced with short-chain PFAS that are believed to be less toxic and safer for use, with no current study showing any findings of health risks.

PFAS molecules are speculated to cause health risks, through interactions with receptors, on the surfaces of heart cells. Since the molecule mimics many natural lipids, cells may confuse them and take them up into the cells, which may lead to disturbances in the heart cells, leading to health complications.

Previous studies on now mostly discontinued PFAS species have indicated that these molecules cause metabolic stress, leading to the production of reactive oxygen species that will do damage to cells.

The authors stated a “pressing need” to investigate the overall association between the different PFAS and how the compounds affect the development of hypertension “jointly.”

The researchers noted that since their study only focused on middle-aged women, it is unknown if the same level of risks can also cross over to men and other women.

The study was published in Hypertension on June 13, a scientific peer-reviewed journal.