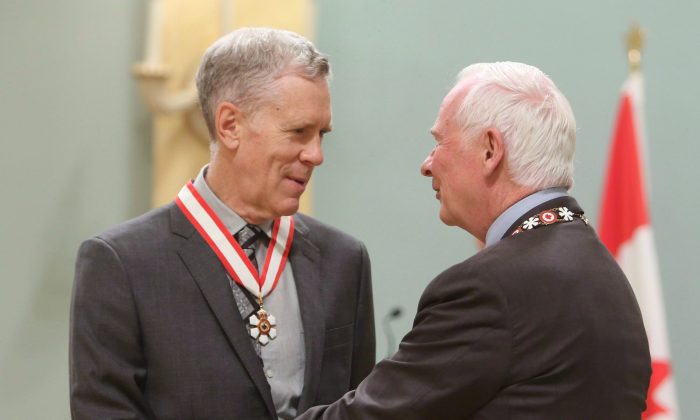 Author and humorist Stuart McLean is presented with the Officer of the Order of Canada medal by Gov. Gen. David Johnston in Ottawa on Sept. 28, 2012. (THE CANADIAN PRESS/Fred Chartrand)
Arts & Culture

With Stuart McLean’s death last week, Canadians bade farewell to the “Vinyl Cafe,” a radio show that was as enlightening as it was endearing. A class act, McLean was so unique that his death leaves a void in the Canadian landscape that will remain forever empty.

The quintessential storyteller, McLean was a soft-spoken gentleman who could draw an audience in with authenticity and charm, weaving tales of life’s intricacies, from the simple to the profound. His death represents much more than the loss of a great Canadian storyteller; McLean represented a dying breed of Canadians who fiercely believed in and fought for goodness.

He was such a Canadian voice—quiet, unassuming, gentle, yet powerful in his delivery. He told it like he meant it. Often funny, sombre at times, McLean could spin a yarn like few others.

And he made us laugh, the kind of innocent laugh that is free from subversive or contextual winks and nods. We laughed because he spoke so poignantly about the joys and sorrows of the common man and the essence of the human condition.

McLean had that old-world charm and politeness that Canadians were proud to embrace and call their own.

An interesting way to spend a few hours is to listen to CBC Radio’s “Rewind,” a playback of selected radio broadcasts from decades past. More than the particular subject matter, it is remarkable to hear how differently people spoke over the course of time. There was a politeness, kindness, and respectfulness in the tone of conversation that one can hear steadily dissolve over the years.

People in the 1950s affected a much different tone than we do today. Even when the issues were heated and the two sides were embattled in their arguments, there was an ingrained politeness that was always there—not a feigned politeness but a genuine expression of assumed respect for others and their viewpoints.

It’s that kind of politeness that Canadians are famous for. It could be argued that it is the quintessential Canadian value—but one that is in ever-present danger of eroding.

Stuart McLean was a rare voice that wholeheartedly exemplified that tradition of polite respect. He was the real deal, the uncle you couldn’t wait to see at Christmas.

His work was akin to the holiday classic “The Christmas Story,” where BB guns, brotherly battles, angry fathers, and exasperated mothers struck a chord of truth through the attributes of stoicism and good humour. Maclean was that voice, that tone, that demeanour, that could have been pulled from any decade in the past—a true classic of our modern age.