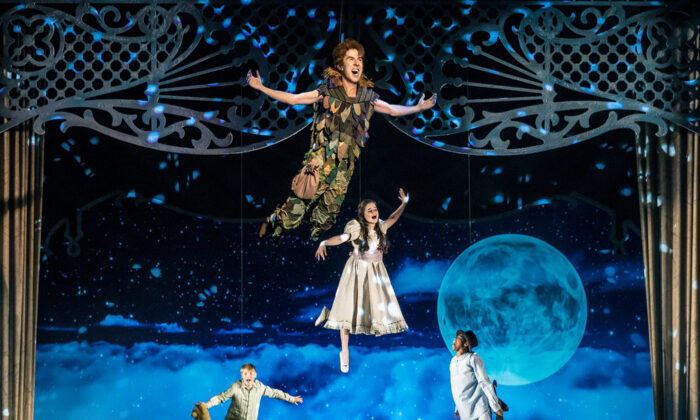 “Peter Pan” first took center stage in a London theater two days after Christmas in 1904. In advance of its opening, word got out that the play by Scottish author J.M. Barrie (1860–1937) was about a boy who didn’t want to grow up, who could fly, and who had adventures in a place called Neverland. The gossip was that the unusual play would be a bust, so everyone was surprised when it turned out to be a big hit.

It wasn’t just a huge success in its own time, though; Peter has never grown old. Indeed, he seems to be living forever having been immortalized in Disney’s animated movie (1953) and the film “Finding Neverland” (2004) starring Johnny Depp; in Broadway musicals, such as the production starring Mary Martin (1954), and revivals with Sandy Duncan (1979) and gymnast Cathy Rigby (1990). In modern culture, it became the name of a psychological syndrome, and even a moniker for a major peanut butter brand.

Since Peter Pan has become such an icon, it’s understandable that the Chicago Shakespeare Theater—which has a penchant not just for mounting Shakespeare’s work but also for children’s classics—would have found it irresistible to produce “Peter Pan, A Musical Adventure.” Indeed, the Chicago theater company presented the show in 2018, which was so well-received by critics and garnered such box office receipts that the company is offering the musical again in a free, streaming version available to all at ChicagoShakes.com from Dec. 19 through Jan. 1, 2021.

“Peter Pan, A Musical Adventure” is a new version of Barrie’s story by Elliot Davis based on a book by Willis Hall, with a musical score by George Stiles and lyrics by Anthony Drewe. Directed and choreographed by Amber Mak, this captivating production brings out all the qualities of “Peter Pan” that have made it popular through the ages. But the show is not just for kids; it’s for adults as well.

That’s not to say that there isn’t a lot of magic in the production. Patrons will marvel at the lush Victorian-era nursery setting by Jeff Kmiec, thrill at Mike Tutaj’s projections of a London church steeple, a green-leafed island, and a pirate ship, and be fascinated by the flying effects of the ZFX Flying Effects. Indeed the imagination of the production re-creates a breathtaking fantasy world.

Furthermore, it is unlike previous stagings in which Peter was portrayed by female performers. This time, Peter is played by a young male actor, which gives a greater authenticity to the work. And the actor playing Peter, Johnny Shea, with an impish grin and athletic prowess, is amazing. When he flies through the window of the Darling nursery, it’s jaw-dropping exhilarating.

When Peter offers directions to Neverland as the “second star to the right and straight on ’til morning,” and says that “to die will be an awfully big adventure,” we recall the innocence of our childhood. As we watch Peter’s sense of wonder, we relive the freedom of childhood, a nostalgic world of escape from adult responsibility and drudgery, and of carefree days filled with fun and frivolity.

Other performers who contribute to the enchantment of the show include James Konicek, who plays Mr. Darling and Captain Hook, and who almost goes overboard in his hilarious depiction of the scoundrel pirate who lost his hand to a crocodile. When he sings “When I Kill Peter Pan,” he demonstrates how good being bad can be.

Cameron Goode and Carter Graf as her younger brothers, John and Michael, deliver nice turns. Rengin Altay offers a poignant finale as the grown-up Wendy, and then there is the Darling family’s huge nursemaid dog, Nana. Played by Butler-DuPlessis, in costume designer Theresa Ham’s shaggy dog costume, he steals the show.

Last but not least, there is Tinker Bell, the fairy created by Greg Hofmann’s lighting effects. When Barrie first wrote the play, Peter Pan could fly on his own. But when children began breaking bones as they jumped off beds in imitation of Peter, Barrie added Tinker Bell’s fairy dust as a prerequisite for flying.

When Peter asks the audience to bring Tinker Bell back to life by clapping, theatergoers in the 2018 production that I saw applauded wildly. Surely, viewers watching the streamline repeat of the show will do the same.

As an arts writer and movie/theater/opera critic, Betty Mohr has been published in the
Chicago Sun-Times, The Chicago Tribune, The Australian, The Dramatist, the SouthtownStar, the Post Tribune, The Herald News, The Globe and Mail in Toronto, and other publications.