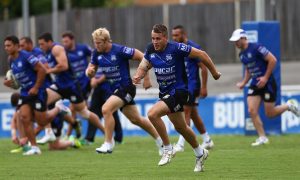 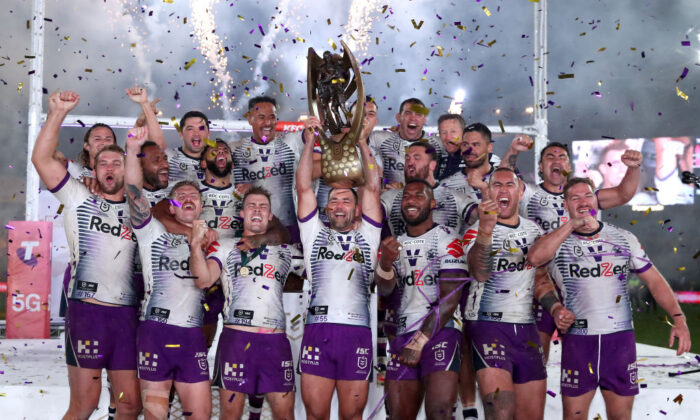 Cameron Smith of the Storm holds aloft the Premiership trophy and celebrates with teammates after winning the 2020 NRL Grand Final match between the Penrith Panthers and the Melbourne Storm at ANZ Stadium on October 25, 2020 in Sydney, Australia. (Cameron Spencer/Getty Images)
Australia

Storm Take out the NRL Crown for Victoria

Make no mistake of it. Melbourne’s NRL grand final win was for Victoria.

With a large V emblazoned on their chest, the Storm’s home state was never far from their mind during their Sunshine Coast camp or on the field this year.

And never was it any clearer than when Cameron Smith pointed to it as he addressed his players on Sunday night, just moments before they ran out and beat Penrith 26-20.

“That’s what it was all about for us,” coach Craig Bellamy said.

“This group with (the connection of) their families playing for the people of Victoria.

“We got some real strength out of that.”

Aside from the Warriors, the Storm felt the impact of the virus as much as any team.

They didn’t play one game in front of a home crowd this year, and haven’t been in their own homes since June.

The team spent a week in Sydney unsure where they’d land for the remainder of the season, and within a fortnight it was clear they wouldn’t return home.

It’s therefore fitting that despite Victoria and Melbourne copping the harshest lockdowns in the country with little reprieve since March, their teams have succeeded.

“It’s a tough time back there at the moment and we wear the V on our jersey proudly.

“I can’t wait to go back there and celebrate.”

The Storm’s success came after Richmond’s in the AFL on Saturday night, marking the second time in four years both major football codes have been won by Victorian sides.

It was also just the third time in history that two Victorian teams have faced off in the AFL decider, while Melbourne reigned supreme in the NRL.

All now hope they can return to playing there in 2021.