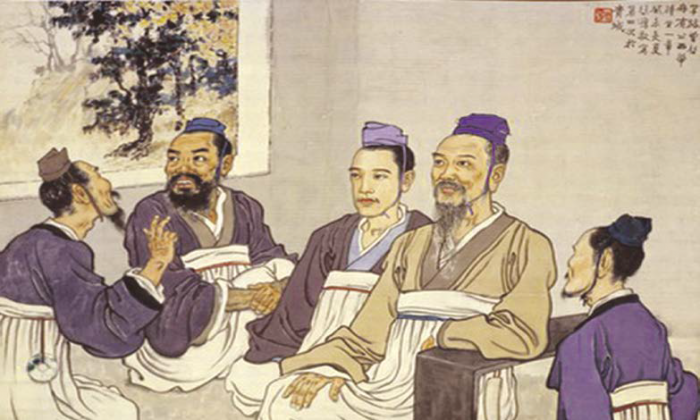 The Prime Minister of Lu State, Ji Wenzi, was known for his thriftiness and strict conduct, and was deeply respected by his people.
Chinese Culture

Stories From the Students’ Rules: Live Neatly and Treasure Your Time

It is said in the Di Zi Gui:

Rise early in the morning,
And sleep late at night.
Age comes quickly,
So treasure this hour.

When we realize that time is passing us by and cannot be turned back, we should especially treasure the present moment.

A good example of treasuring time in your youth is Che Yin (車胤), who served as a military general and later the Minister of Personnel (one of the nine ministries under the emperor in ancient China) during the Jin Dynasty.

Che Yin Studies Under the Light of Fireflies

Che Yin was one of the best-known scholars of the Eastern Jin dynasty, being remarkably wellread in various fields. He also had great character and strong language abilities, often making sharp observations and witty comments. As such, he was well-respected in the academic field, and also extremely popular. Che was often the life of the party, and people would lament his absence in any gathering.

Che’s knowledge and language abilities weren’t acquired overnight; as a young boy, he studied with complete dedication from day to night. Here is the story of how he studied under the light of fireflies, to extend his study time well into the night.

Che was born in Nanping, Fujian Province to a family of noble background. His grandfather had been the Prefect of Huiji, and his father served as secretary to one of the princesses.

From the young age of three, Che already showed himself to be thoughtful and polite, earning the praise of relatives who visited the family.

When Che turned five, his father taught him to read and write. Che was not only smart but extremely hardworking. He would be so absorbed in his studies that he would forget to eat or sleep, and not a day passed where he was not buried in a book. He would even stay up till midnight to study.

Che, of course, needed a light to study at night, but after his father resigned from his job, the family lapsed into poverty and could no longer afford to buy oil for their lamps. Although his father worked as secretary for the princess, he was a very honest man and did not earn very much.

So when night fell, Che would feel sad that he couldn’t continue studying. But despite his young age, Che was also quite wise. He realized that he could maximize his learning by reading more books in the day, and reciting the books from memory at night.

One night, Che was sitting in the backyard feeling sorry that he could not study, when he noticed many fireflies around him. As the fireflies twinkled and glowed in the darkness, Che’s heavy heart immediately brightened as he struck upon an idea.

He constructed a makeshift net from a piece of old cloth and a bamboo pole, and began catching fireflies. But there were only a few fireflies in the backyard, which was hardly enough to create enough light. He caught a few more in the front yard, but there still weren’t enough.

Although it was already pitch dark, Che walked to a grass field outside his village, which was dotted with fireflies. Che had no difficulty catching a lot of them in a short time. When he got home, Che placed all his fireflies into a makeshift bag of silk netting, and hung it from the ceiling. The light from the fireflies penetrated the holes in the bag, illuminating the entire room. It was even brighter than an oil lamp! Che happily continued with his studying.

In this way, Che studied well into the night every day, and became an extremely learned scholar. Since then, Che’s story of using fireflies to study at night has become a well-known Chinese tale, and gave rise to the Chinese idiom 囊萤夜读, which describe someone who studies very hard.

When referring to how one should behave in everyday life, Di Zi Gui emphasizes that tidiness and simplicity in one’s dressing is far more important than how “branded” one’s clothes look.

It is stated in the Di Zi Gui:

The ancients always regarded frugality as one of the most noble virtues in daily life. Tidiness was meanwhile considered a reflection of one’s character, and a mark of respect for others. Such exemplars liked Zi Lu, a student of Confucius, and Prime Minister Ji Wenzi would explain why cleanliness and thrift were so important in their lives.

Zi Lu (子路) was a student of Confucius and an official of the State of Wei. Despite his hot temper, he was a very upright person and was very careful about his appearance.

One year, internal chaos erupted in Wei State as rebels gained power and began conducting raids against those in the state administration. Upon hearing the news, many officials packed and fled overnight.

Despite being out of the country during the rebellion, Zi Lu chose to rush back to aid his country.

His peers tried to dissuade him from going back, saying that the situation was very dangerous and he would likely be killed if he did.

But Zi Lu replied “I receive a salary for serving my country. I cannot bring myself to run away at such a time.”

Zi Lu fought against the rebels with all his might, but was far outnumbered. He was eventually injured by the rebels and his hat tassel was cut off. Knowing that death was imminent, Zi Lu roared loudly, “Stop!” Stunned by the loudness of his shout, his attackers stopped.

Zi Lu then said, “If I am going to die, I should at least die in a dignified manner!” Calmly, he retied his hat tassel to his hat, and faced his death heroically and with honor.

The story of Zi Lu’s inspiring courage in the face of death has been passed down to this day in Chinese history.

Prime Minister Ji Wenzi (季文子) was born to a family of three generations of ministers. He was a nobleman and famous diplomat of the State of Lu during the Spring and Autumn Period, serving his country for more than 30 years.

Ji Wenzi led a very simple and frugal life. He considered thrift to be the fundamental guiding rule for his conduct, and required his family to be as frugal as him. He dressed very simply but neatly, and besides the formal robes he wore in court, he did not have any other fancy clothes. Whenever he traveled for work, he would use a very plain-looking horse carriage.

One of his ministers, Zhongsun Ta, tried to persuade Ji: “You are the highest-ranking official, and command great respect. But I heard that you don’t allow your family to wear silk clothes at home, and you don’t feed your horses with good grain. You also don’t pay attention to the quality of your clothes. Wouldn’t this make you look shabby, and be a source of ridicule by our neighboring countries?

“This would also be detrimental to our country’s image, and people will gossip about how the Prime Minister of the Lu State lives in such a manner. Why doesn’t Your Honor change this way of life? Wouldn’t that be better for you and the country?”

Ji responded in a serious tone: “I, too, want my home to be decorated luxuriously and elegantly. But look at the people in our country. Many of them are still eating food that is too coarse to swallow, and are wearing clothes that are torn and shabby. There are also others who are cold and starving.

“When I think about these people, how can I still bear to indulge in material wealth? If I dress up my family and feed my horse on good grain—while my people can only afford to drink coarse tea and wear shabby clothes—how can I still have the conscience to serve my country?! Moreover, I have heard that a country’s strength and glory is defined by the moral character of its civilians and officials, and not by how glamorous their wives look or how fine their horses are. How can I accept your suggestion?”

After hearing Ji’s words, Zhongsun was ashamed of his previous comments, but also had even more respect for Ji. From then on, Zhongsun also followed Ji’s example in leading a simple life. He asked his family to wear clothes of ordinary cloth, and fed his horses with rough chaff and weeds.

When Ji Wenzi learned of Zhongsun’s change, he praised Zhongsun for being a moral person who could amend his mistakes immediately.