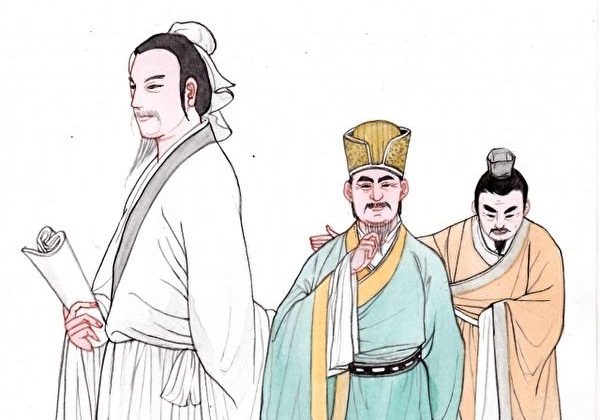 Yang Zhen was a fair and honest official who lived during the Eastern Han Dynasty. (The Epoch Times)
Chinese Culture

Stories From the Students’ Rules: The Spirit of Discretion and Conscientiousness

The Di Zi Gui shows the importance of minding details when in movement or taking action:

As cryptic as this sounds, this actually teaches an important principle–that we should still conduct ourselves properly, even when no one is around to see it or when we are not being watched by others.

This virtue is embodied by the ancient Chinese scholar Yang Zhen, who refused to accept a gift of gold even though no one else was around.

Refusing a Gift of Gold at Midnight

Yang Zhen was a celebrated scholar of the Eastern Han Dynasty. Yang Zhen lost his father at a young age and grew up in poverty. But he had a passion for studying and was very diligent, accumulating a wealth of knowledge and becoming a learned scholar. In fact, there was a popular saying among the scholars at the time that “Yang Zhen is the Confucius of the Guanxi area.”

Yang Zhen taught for over 20 years before he eventually became a government official. Because he was over fifty years old at the time, many people, including Yang Zhen himself, did not expect him to be accepted for an official position. But Yang Zhen’s good reputation became known to General Deng Zhi, who invited him to become an official. Later, Yang Zhen became the prefect of Jinzhou County and Donglai County.

Yang Zhen was very fair and honest and did not seek personal gain. He held himself strictly to the principle of being an “official with clean hands,” or one who was uncorrupted.

What are you saying? Heaven knows, Earth knows, you know, and I know. How can you say that no one else knows？Though no one else is here, isn’t our conscience here?
— Yang Zhen, upon refusing a bribe

While serving as prefect of Jinzhou, Yang met a man Wang Mi whom he found was very talented. So under his recommendation, Wang Mi was promoted to the position of magistrate of Changyi County.

Later, Yang Zhen was promoted to the position of prefect of Donglai County. On his way to Donglai, he passed by Changyi, where he was warmly welcomed by Wang Mi.

In the evening, Wang Mi paid a visit to Yang Zhen. The two men were absorbed in pleasant conversation for many hours, until they realized how late it was. As Wang Mi was about to leave, he took out some gold and said, “It is a rare opportunity to see you, my great mentor. I have prepared a little gift to express my gratitude for your guidance.”

Yang Zhen replied, “Because I knew of your talents, I recommended you for an official position, hoping that you could be fair and incorrupt. What you did just now was against my expectations of you. The best way you can repay me is by serving the country well, instead of giving me anything.”

However, Wang Mi insisted, “It’s the middle of night, no one else will know about this except you and me. Please accept it.”

Yang Zhen immediately became very stern and said, “What are you saying? Heaven knows, Earth knows, you know, and I know. How can you say that no one else knows？Though no one else is here, isn’t our conscience here?”

Upon hearing this, Wang Mi reddened with embarrassment and left hastily with his gold.

Later, Yang Zhen was transferred to Zhuo County. He was very fair and just, and his whole family lived a simple life.
His friends tried to persuade him to leave some property to his offspring, but he replied with a smile, “I am leaving my reputation of being an uncorrupted official as inheritance to my children, isn’t that riches enough?”

It is easy to obey one’s ethical principles in front of others but hard to behave consistently when one is alone. Yang Zhen’s refusal of the gift of gold demonstrates his exemplary spirit of staying upright and honest, even when he is not watched by others—a value that is worth learning from.

Guan Ning Throws Away Gold in the Paddy Field

Conscientiousness and focus are important when doing tasks. The Di Zi Gui goes:

Do not rush any matter
Haste means many mistakes

A good example is the historic figure Guan Ning, who was known for being very focused in his work and spiritual cultivation.

Guan Ning was a scholar during the Three Kingdoms period. From a young age, he developed the habit of doing things with great carefulness and concentration.

Guan Ning had a classmate called Hua Xin, and the two used to study and farm together. One day while Guan Ning was hoeing the rice paddy, he hit upon a rock that turned out to be a gold nugget. He threw the gold out of the rice paddy and continued hoeing.

Hua Xin saw Guan Ning throw away the gold nugget and picked it up. He examined it from all angles and then looked at his classmate for a long time before he too decided to throw it away.

On another occasion, the two friends were studying together when they heard the sound of drums and gongs outside their window. The noise was from a grand procession of high-ranking officials and their guards-of-honour passing by.

Guan Ning continued to focus on his book, but Hua Xin could hardly sit still. Finally, he could not resist but go outside to watch the procession, until the procession had walked far away.

When Hua Xin returned, Guan Ning took out a knife and cut the mat they had sat on together in half, saying, “We should no longer be friends.”

Confucius once said, “Do not work with people who have different values from yours.” Mo Zi also once said, “One who stays near ink gets stained black”, meaning that one will inevitably be influenced by the behavior of one’s company.

After observing Hua Xin’s behavior in various situations, Guan Ning realized that they differed too much in personality. Hua Xin was easily distracted by money and power, and was careless in his attitude to studying, which would have made it more difficult for Guan Ning to maintain his own focus in his work.

Therefore, Guan Ning cut the mat in half, and made the decision to stay away from Hua Xin. From then on, “breaking up with a friend by severing the mat” became an idiom referring to the end of a friendship.