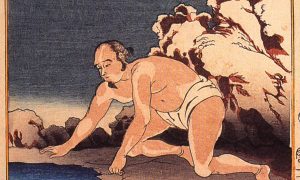 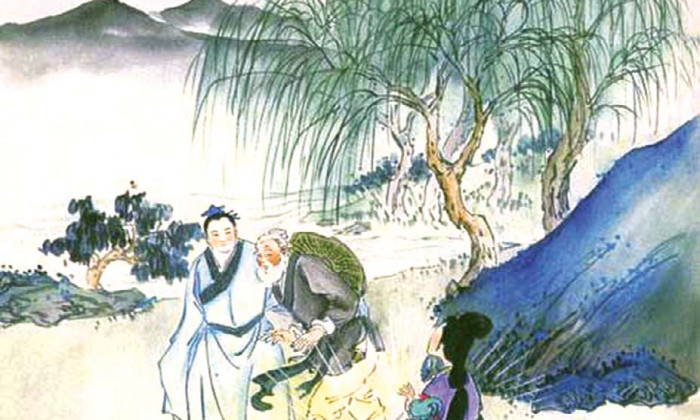 Stories From the Students’ Rules: Respect and Care Unto All

The “Standards for Being a Good Student and Child” (Di Zi Gui) is a traditional Chinese textbook for children that teaches children morals and proper etiquette. It was written by Li Yuxiu in the Qing Dynasty, during the reign of Emperor Kang Xi (1661-1722). In this series, we present some ancient Chinese stories that exemplify the valuable lessons taught in the Di Zi Gui.

Encountering an elder on the road,
Approach and bow quickly.
If the elder is silent
Retreat and stand respectfully.

Dizi Gui describes in great detail the ways to show respect to one’s elders. In eating and drinking, and in walking and sitting down, we should let the elder person go first. When an elder is calling someone, we should immediately call that person for the elder.

We should not sit when our elders are standing. After our elders have sat down, we can sit only if we are told to do so. When speaking to a respected elder, we should speak in a low voice, but it is also inappropriate if it is too low to be heard. We should serve our many elders like serving our own father.

The Courtesy and Graciousness of Lord Xinling

Lord Xinling (信陵君) was a prince of the State of Wei during the Warring States Period. The prince was very kind, generous and courteous to the elderly and to scholars. He was never remiss in his treatment of any of them, in spite of his wealth and rank, and always spoke with them courteously, regardless of their ability or achievements.

As a result, many scholars from thousands of miles around sought his company and pledged their allegiance to him. During that time, no other states dared to invade Wei due to Lord Xinling’s large pool of talented scholars.

There was a very talented seventy-year-old man called Hou Ying (侯嬴). He was very poor and—despite his age—worked as a guard at the city’s Eastern Gate. When Lord Xinling heard of him, he sent his subordinates to meet him with lavish gifts. But Hou rejected the gifts courteously, saying, “I have been improving my character for years and practice integrity. I can’t accept such gifts just because of my poor status.”

Upon hearing this, Lord Xinling organised a huge banquet at his home, and invited many important guests. When all the guests were seated, Lord Xinling set off with his horse carriage (with the left seat empty and reserved for Hou Ying) and his entourage to the Eastern Gate, to invite Hou personally.

Hou tidied his old and shabby coat, and got into the carriage silently. He sat right next to Lord Xinling and showed no signs of meekness or humility, observing Lord Xinling’s response. But Lord Xinling was even more respectful to Hou.

Hou Ying then asked Lord Xinling if he could take him to visit his friend at the slaughterhouse. Lord Xinling agreed with pleasure and drove him there immediately.

Hou Ying alighted from the carriage and greeted his friend Zhu Hai. He deliberately took his time with Zhu Hai while keeping an eye on the prince. But Lord Xinling’s expresssion appeared even more amiable.

By now, the prince’s entourage were seething with anger. During this time, all the generals, ministers, and high-ranking officials had been waiting in the banquet hall for the opening of the feast. Furthermore, the people in the streets had seen Lord Xinling personally driving his carriage for Hou Ying. But when Hou noticed that Lord Xinling’s attitude had not changed one bit, he finally bid goodbye to his friend.

When they arrived at the banquet, Lord Xinling led Hou Ying to his seat at the main table, and introduced and praised him in front of the guests. The guests were greatly surprised at Lord Xinling’s act. When everyone was drinking and making merry, the prince stood up and proposed a birthday toast to Hou.

Hou then took the opportunity to say: “Today I have been too hard on His Highness. I am just a gateman, yet His Highness personally drove his carriage to fetch me, and welcomed me in front of so many officials. I shouldn’t have visited my friend, yet he graciously acceded to my request.

“As a result, I wanted to heighten His Highness’ reputation, so that’s why I deliberately kept him waiting for a long time. The visit was an excuse to observe how he would respond, but he was even more humble and respectful. Everyone on the streets regarded me as an impolite person, while recognising the Prince as a noble man who is courteous to the people!”

After that, Hou Ying became an important subordinate of Lord Xinling. Hou Ying also introduced Lord Xinling to Zhu Hai, who was a sage with great abilities. With the assistance of these two wise men, Lord Xinling became immortalized in Chinese history for defeating the Qin Army and temporarily saving the State of Wei and the neighboring State of Zhao. [[Hou Ying, who was too old to join his patron, instead pledged his loyalty and support by committing suicide on the day of the attack.]]

Regard Everyone as Family

Dizi Gui teaches us to treat everyone like our own family. We should serve our elders as if we are serving our parents, and we should treat our peers as if they are our own siblings.

Here are a few touching stories from ancient China, about people who treated strangers like their own family.:

Du Huan was an official of the Ming dynasty. Du’s father had a good friend, Chang Yungong, who was a subordinate military official. But one day Chang died suddenly, and his family’s business investment failed soon thereafter. His surviving 60-year-old mother, Mrs Chang, was left penniless and homeless.

Through sheer chance, Du bumped into this poor lady. Mrs Chang had lost contact with her younger son for years, and despite seeking out her relatives for assistance, none of them would take her in. So Du decided to support her for the time being, while helping her trace her younger son’s whereabouts.

Later, although Du managed to locate and contact Mrs Chang’s son, the son refused to take Mrs Chang under his care. So Du Huan continued to look after the old woman with great filial piety, treating her like his own mother. When she passed away, Du Huan bought a coffin and held a funeral and a burial for her. Subsequently, he even visited and cleaned her grave every year.

Mazu, Goddess of the Sea

There was a woman called Lin Mo, who lived in Fujian Province during the Northern Song Dynasty. According to legend, she never cried from birth till she was one month old. As a result, she was also called Mo Niang (默娘), or Silent Maiden.

Mo Niang’s father and brother were fishermen. One day, their ship was wrecked in a terrible disaster. With Mo Niang and everyone else’s effort, her father was saved, but her brother was lost at sea.

To prevent this tragedy from happening to others, Mo Niang often risked her life to rescue ships in distress.

Once, her fellow villagers were getting ready to go out to sea. Because Mo Niang was able to read signs of impending weather change, she could tell that a huge storm was coming, and she begged the villagers not to go.

To Mo Niang’s despair, the villagers persisted in going out to sea, as they had to feed their families. Nevertheless, she asked them to steer their ship in the direction of light, if they met with a storm.

True to her prediction, a huge, raging storm sprang up, which rendered all the light beacons and navigation markers ineffective. At that moment, Mo Niang bravely lit her house on fire. The blaze lit up the sea with brightness, and guided the villagers to land. Due to her great love and compassion, the villagers escaped from being drowned.

Mo Niang worked herself to exhaustion to protect those at sea. Sadly, her dedication took its toll, and she died prematurely at 28.

In remembrance of Mo Niang, the Chinese people have built temples honoring her along the coastline, and refer to her as Mazu, the Goddess of Sea.