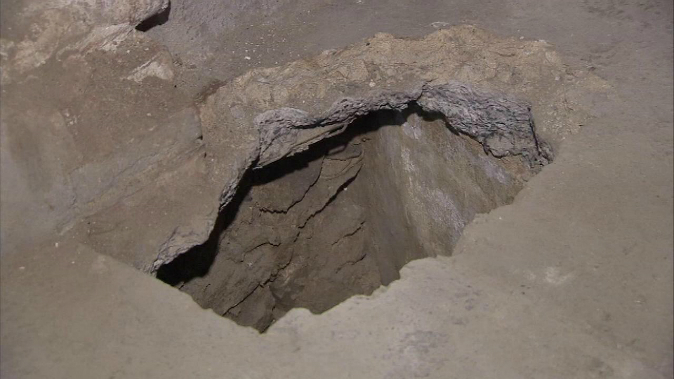 The white, Colonial-style home in Lansdowne, Pennsylvania, isn’t your average home. But it took Alexandra Poulos, 43, nearly four decades to realize that.

She had always felt that there was something “unique and different” about it.

Poulos, who is an operations manager for a clinical research organization, said her parents bought the house in 1974, when she was only a year old.

Eight years ago, when Poulos’ mother passed away, and only seven months after her brother passed, her father signed the house over to her. She said she felt a tremendous connection with the home, especially since the death of her mother and brother.

“My mom and brother, they were still there to me,” she said.

Poulos’s best friend Argie Fafalios, 44, an art teacher, said many people tried to convince Poulos to get rid of the house.

“People always wanted Alex to sell the house, but she never wanted to. … Her heart bled for this house,” Fafalios said.

“How do you sell your soul?” Poulos chimed in.

So, Poulos rented out the home to a family whom she said was exactly like hers: “a mom, dad, kids, and a dog.”

Although, she has her own place, she would still visit the home to make sure things were in order.

During one of her visits in May, Poulos noticed “things started breaking in the basement.”

Poulos called Baldwin Masonry to repair the damage in the basement and erect columns to support the ceiling.

Before the workers came in, she asked one of them in a text message to “dig a little deeper,” once they start digging out the basement. She felt there was something under the house.

When the workers tore a hole in the basement floor, they discovered an underground railroad—set up by a slave named Harriet Tubman. It was where she helped runaway slaves escape to freedom.

“Alex, we found it! My guys are freaking out,” Poulos recalled the day one of the workers from the Baldwin Masonry called her.

They said the hole was “15 feet down, about 9 feet wide, and 9-10 feet long.” One of the workers almost fell into it, Poulos said.

Poulos was so excited, she had to leave work early. She said her family had often heard rumors about their house being one of the many hidden stops along the Underground Railroad, but they never really looked into it much.

One of the tenants, Jerry, who Poulos said bears a striking resemblance to the movie star Samuel L. Jackson, got his fishing rod and “it wouldn’t even touch the bottom of the floor,” Poulos said. The second he walked into the Lansdowne home, he knew it was special.  A spirit told him “don’t leave,” she said.

Fafalios, too, said that as a teenager she felt a “strong presence” in the house.

She said she also plans to give a tour one day.

“I would like to do something with it just to honor what it stands for,” she said.

Poulos told Epoch Times that there’s a street called Garrett Road named after Thomas Garrett. He and Tubman together freed 2,700 slaves in the area. “It’s two minutes away from the house,” she said.

Poulos is currently reaching out to historical societies to learn more about the Lansdowne home and other homes in the area.

“There was a reason why her family settled in that house,” Fafalios said.

Poulos, who is said to be very spiritual, once dreamt that she was looking down into a hole in a basement and pages of books were turning.

But she didn’t know what it meant, until now.

“She thought about it before it even occured … It’s just incredible,” Fafalios said.

“Alex’s home was a part of a revolution,” Fafalios told Epoch Times. “Her home saved many lives.”