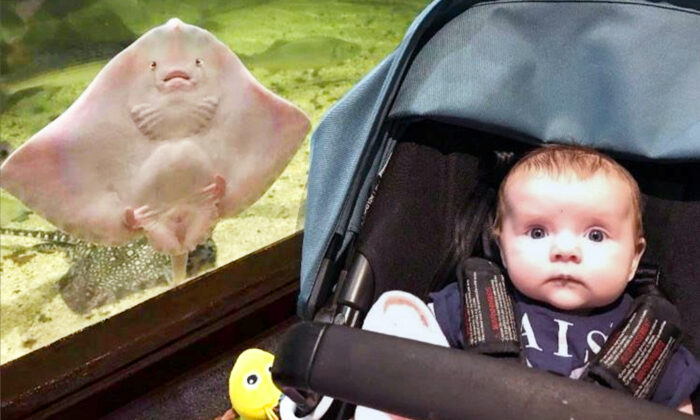 A British mom “burst out laughing” when a bemused stingray photobombed her picture, pulling the exact same face as her baby daughter.

Wendy Armstrong, 41, from the coastal town of Workington, Cumbria, England, regularly takes her two daughters, 2-year-old Aurora and 6-month-old Daisy, for a day out to the Lake District Coast Aquarium.

During one visit, Wendy noticed a stingray was taking a particular interest in Daisy and that both were pulling the same “miserable facial expression.”

Wendy, who works as a nurse, and her husband, Mike Armstrong, 45, who is a power plant worker, said Daisy used to be a very serious baby.

She said: “It is definitely up there as one of our favorite pictures that we have of our kids.

“I had my phone out, and when I saw they were both pulling the same miserable facial expression, I burst out laughing and took a photo.

“When she was that age Daisy never used to smile that much, which did slightly concern us, but thankfully she is much happier now!”