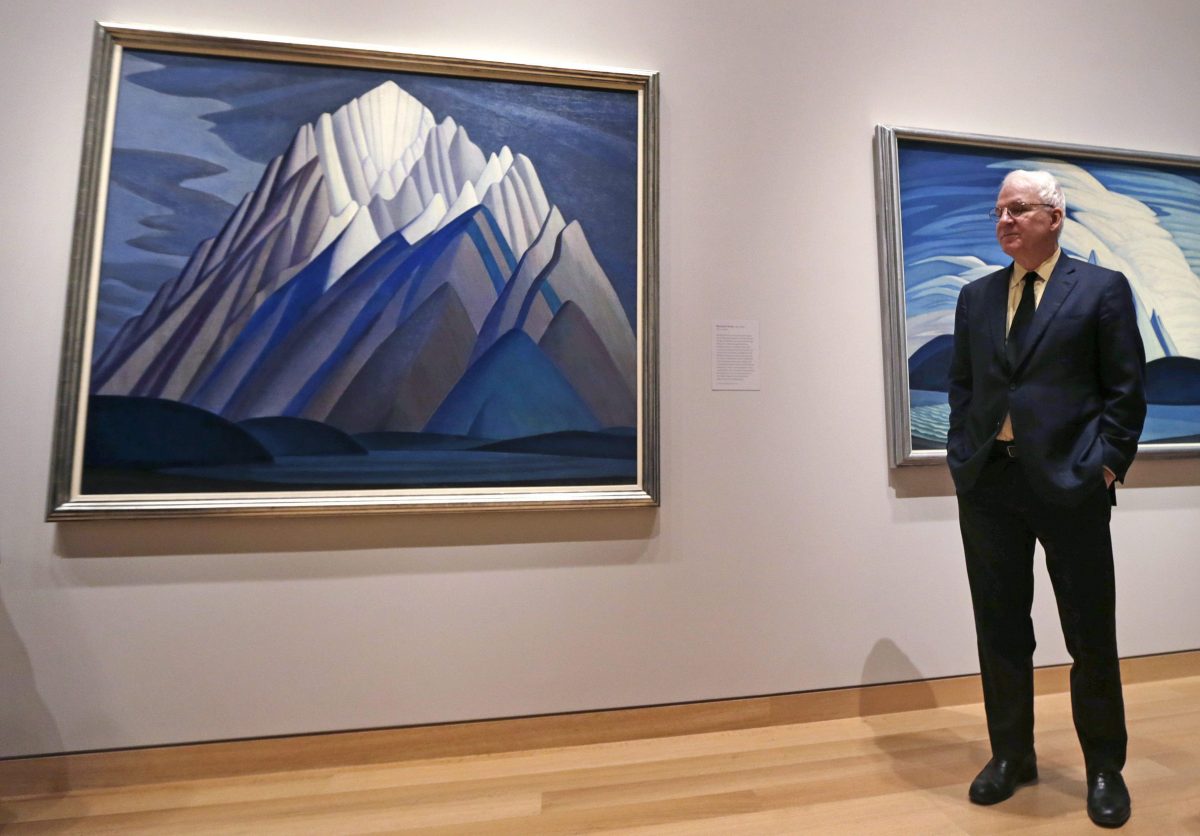 Actor and comedian Steve Martin, who is guest curator of an exhibition at the Museum of Fine Arts devoted to Canadian modernist Lawren Harris, stands next to Harris's "Mountain Forms" painting during a gallery preview at the museum in Boston, Friday, March 11, 2016. "The Idea of North: The Paintings of Lawren Harris" runs through June 12. (AP Photo/Charles Krupa)
Arts & Culture

Comedian has been a longtime enthusiast of the legendary Group of Seven leader's work
BY The Canadian Press TIMEJuly 6, 2016 PRINT

The acclaimed American actor, comedian, and musician has been a longtime enthusiast of the legendary Group of Seven leader’s work. Martin first saw his paintings in Toronto after writing a letter to billionaire businessman and Harris collector Ken Thomson.

Prior to his death, Thomson had amassed one of the most sizable private art collections in Canada. In 2002, he donated 2,000 works to the Art Gallery of Ontario. But when Martin reached out, the Harris paintings weren’t yet hanging at the AGO, which at the time was under construction.

“I said: ‘So, I understand you’re the biggest collector of Lawren Harris.’ And he invited me up to see his pictures in kind of an ordinary storeroom,” Martin recalled in an interview at the downtown gallery Tuesday. “It was really, really a nice experience.”

After exhibiting in Los Angeles and Boston, “The Idea of North: The Paintings of Lawren Harris” opened at the AGO on July 1. Martin curated the exhibition in collaboration with the AGO’s Andrew Hunter and Cynthia Burlingham from L.A.’s Hammer Museum.

“Lawren Harris was virtually unknown in America—and now he’s not. And the art lovers of America saw some of his finest work,” said Martin, 70.

“It was a real success in America, and I love that the show ended up here in the AGO. In a sense, Toronto is where this whole idea started for me and when I first saw Lawren Harris paintings and was so taken with them.”

The exhibition features more than 30 of Harris’s most significant and rare northern landscapes from the 1920s and 1930s, drawn from major public and private collections across Canada.

The Canadian showcase includes Toronto-focused sections unique to the AGO. The exhibit features a selection of the artist’s early paintings from the 1910s, including those capturing the Ward neighbourhood in Toronto where the modernist painter spent his formative years.

Martin said there is a notable contrast between the Brantford, Ont.-born artist’s earlier creations—showcasing street scenes, homes, and social realism—and his later works.

“If you look around, there’s almost nothing living in any of these paintings,” Martin said.

“There’s icebergs, there’s mountains, there’s rocks, there’s implied dirt and implied grass, sometimes. But I believe he discovered how to paint his inner transcendence. … I like that he’s painting a subject from his mind, and it’s coming out in a way that was unexpected—even perhaps to him. … He would literally move mountains. He would have a painting of mountain with its companion mountain behind it, and in the next picture, that companion mountain would be gone.

“So he is structuring the paintings as an artist would. These paintings really reflect the view of an individual artist working at the top of his powers.”

The Hollywood legend was effusive in his praise and thanked “the people of Canada” in helping to amass the expansive range of Harris originals.

“There have been smaller exhibitions and ones that were missing masterpieces. But this one is unlikely to be repeated for a long time because these paintings came from all over Canada,” said Martin, citing locales including Vancouver, Hamilton, Toronto, Ottawa, and Saskatchewan.

“It’ll probably be a while before these pictures are put together again. It’s too bad, because I’d love the show to go around the world. But it’s a difficult thing to do.”

The exhibit runs at the AGO through Sept. 18.