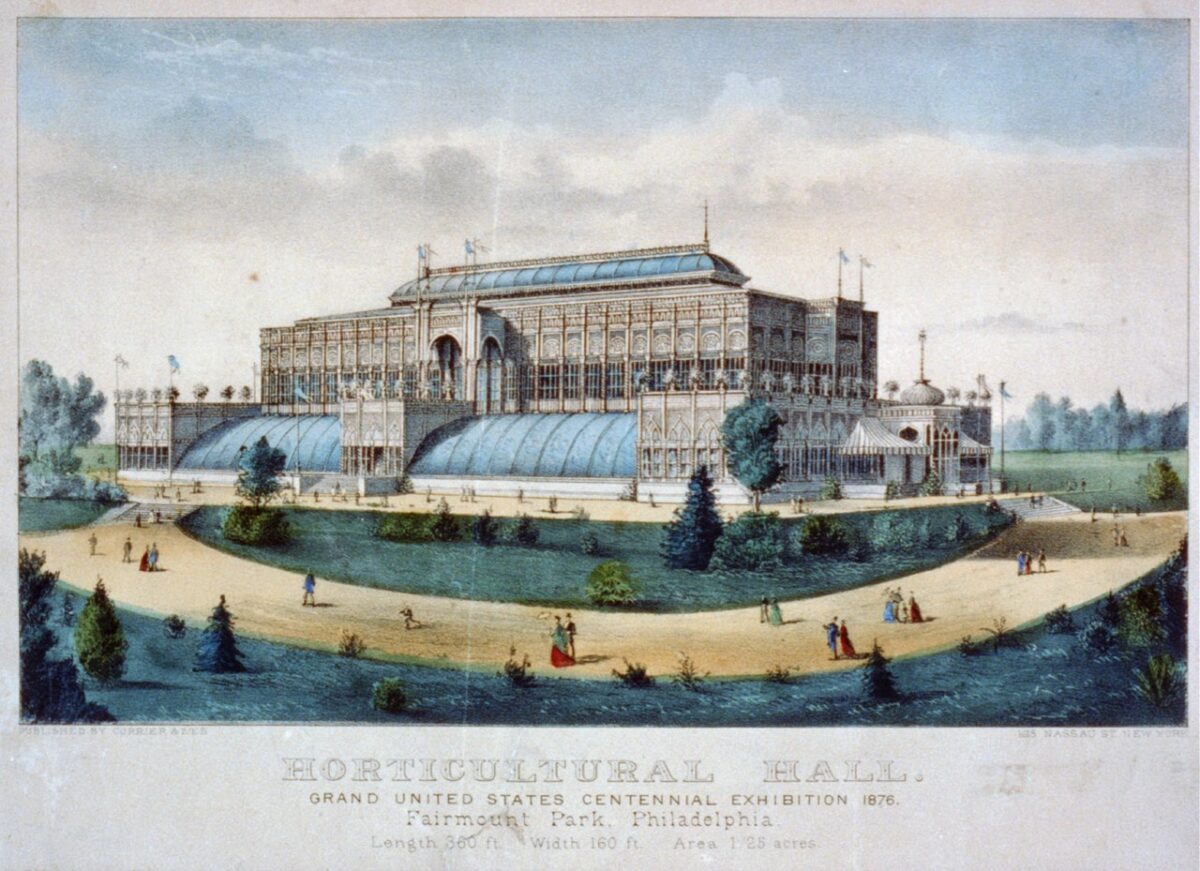 When President Ulysses S. Grant—helped by Don Pedro II, emperor of Brazil—hand-cranked the 40-foot-tall, 600-ton engine to life, he was opening the first large-scale international exhibition ever to be hosted by the United States. It was May 1876, and this was the Philadelphia Centennial Exhibition. The massive Corliss engine, which the American president had just cranked on, had already won the top prize at the Paris Exhibition nine years earlier; now, it was the main attraction of America’s own Centennial expo.

The engine’s inventor was a machinist named George H. Corliss. Corliss had left school at age 14, working a variety of jobs until, in his early 20s, he began experimenting with machines. His was a natural gift. By his mid-20s, Corliss was awarded a patent for his first practical invention: a machine that could automatically stitch boots. But before he could mass produce and market the boot-stitcher, Corliss’s attention wandered to steam power. After a few years working at a steam engine (and boiler) manufacturing company, where he was given the freedom to experiment on his own designs, he started his own business. Corliss’s massive steam engine, with its unique valves regulating steam and exhaust, reduced heat loss and operated with significantly better fuel efficiency than those of his competitors.

His Corliss Steam Engine Company, based in Providence, went on to ship engines all over the country, and soon, the world. Indeed, Rhode Island became the most important steam engine manufacturing hub on Earth. So large was the Centennial Engine displayed at the Centennial Exhibition that its multiple stories could only be accessed by a series of steel ladders. Virtually all of the machinery at the expo was powered by Corliss’s steam-powered invention. Awards and recognition were showered upon Corliss from the most prestigious mechanical associations the world over.

But Corliss’s engine wasn’t the only marvel at the Philadelphia Centennial Exhibition. McCormick’s reaper, now world-famous, was on display, too. Already long a business titan, Cyrus McCormick was the son of a blacksmith. Having spent much of his childhood laboring in his inventive father’s smithy, and building on his father’s design, McCormick spent decades improving (and patenting) his unique reaper. With its levers, cranks, “fingers,” boards, blades, gears, and teeth, the mechanical, horse-drawn McCormick reaper revolutionized the harvesting process, which had always necessitated large numbers of paid laborers or slaves. McCormick’s “reaper is to the North what slavery is to the South,” declared Secretary of State Edwin Stanton. Not only did the machine drive down the need for slave labor, but it freed up hundreds of thousands of young men to leave their western farms and enlist in the Union’s armies. When McCormick’s reaper factory burned down in the Great Chicago Fire of 1871, he opted to follow the admonition of his wife—“Rebuild!”—and managed to erect a thriving business out of the ashes. He was, in the words of one biographer, “a great commercial Thor.”

But Corliss’s engine and McCormick’s reaper were just the grand tip of the technological iceberg. The same day that the exhibition opened, a Scotsman and professor of physiology at Boston University named Alexander Graham Bell, on site at the expo, impressed the Brazilian Emperor with his telephone display. “My God—it talks!” the emperor is reported to have exclaimed. Bell’s mother was nearly deaf, and for years he’d been employed as an instructor in schools for the deaf. All the while, Bell had experimented with electricity to transmit sound. Now, here at Philadelphia, his success suddenly brought him widespread fame. Bell’s telephone was set up on opposite ends of sprawling Machinery Hall.

To Corliss’s engine, McCormick’s reaper, and Bell’s telephone should be added Thomas Edison’s automatic telegraph technology, which sped up transmission for telegraphed messages many times over. When the Centennial expo opened, Edison was still in his 20s, but he had since childhood been experimenting with chemicals and electricity. After saving a 3-year-old boy from death by a runaway train, the toddler’s grateful father—a telegraph operator—had rewarded the (then-teenage) Edison with a job. In this way, Edison learned the ins and outs of telegraphy.

By the time of the Philadelphia event, Edison had already invented an electric vote recorder, a telegraph system that could send two messages at once, and an automatic telegraphy system. This last he placed on display at the exhibition. Edison’s invention made the transmission of long messages—news articles, for example—far more practical and less laborious. Edison’s automatic telegraphs even included a typewriter-like keyboard, upon which messages could be punched out in the form of holes on tape. The tape was then inserted into a transmitter apparatus. Unfortunately for the exhibition, Edison was still a year away from inventing his phonograph.

Monorail and Other Wonders

A visitor to the exhibition would have hopped aboard the elevated, steam-powered Centennial monorail, or spent hours in Machinery Hall, with its countless wonders—Colt revolvers and Winchester lever-action repeating rifles, sewing machines, early versions of the typewriter, newfangled farm equipment. He would have marveled at George Grant’s calculating machine, or new screw-cutting technology that produced more than 100,000 bolts and screws per day (a massive improvement on the standard 8,000), or the arc lamp system powered by Farmer’s and Wallace’s new electric dynamo. This latter display inspired Edison to begin experimenting with the light bulb. He subsequently bought an early version of the bulb from Farmer, and Edison used the Wallace-Farmer dynamo to power his early light bulb demonstrations. Spread out over many buildings erected on fields and woodlands next to the city, the exhibition was divided into areas with names like the “Woman’s Pavilion,” the “Horticultural Hall,” “Horse Car Depot,” “Photographic,” the “State of Kansas,” the “British Government,” “Sawyer’s Elevator & Belmont Mansion,” plus fountains, restaurants, hotels, avenues, bridges, and railroads built specially for the event. There was even a parade of butchers!

For all the post-Civil War sectional strife and Reconstruction pains in the United States, the Philadelphia Centennial Exhibition seemed to put the world on notice that America was nevertheless a powerful new center—perhaps the world’s top center—of industry and innovation. Corliss’s engine, the largest and most powerful on earth at the time, vividly underscored this dawning realization. Somehow, those 13 original, backwater American colonies had grown to 38 mighty states and, having endured a bloody civil war, had emerged the international leader of a budding Second Industrial Revolution.