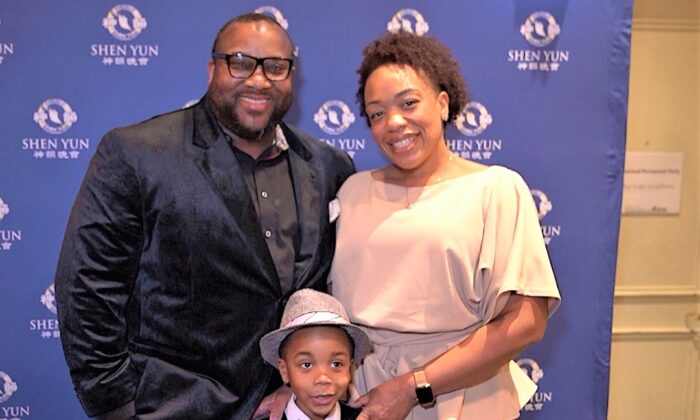 PHILADELPHIA—Melissa Minor-Brown is Delaware’s elected state representative for its 17th district, but on Feb. 29, 2020, a certain constituent required special attention. Her adorable son, Zachariah, wished to see Shen Yun Performing Arts, so tickets became his Christmas present and the family traveled to the Merriam Theater in Philadelphia.

“I love [Shen Yun], I love it,” said Minor-Brown, who is also a nurse. “I love the dances, just the whole atmosphere is amazing.”

“This performance is amazing and what brought us here is our son,” she added. “Actually these tickets were his Christmas present. This is what he wanted for Christmas was to see Shen Yun.”

Her husband, Grandville Brown, works with the Department of Health and Social Services and was taken with the classical Chinese dance performance.

“Yes, I very [much] enjoy the show,” he said, “I love the way the dancers, arrangements, everything is in sequence. It’s very amazing. I love the storylines and how it connects with the dances, too, so very, very pleased so far with the show.”

New York-based Shen Yun is on a mission to revive traditional Chinese culture, including its deeply spiritual essence, which was almost lost at the hands of the Chinese Communist Party. Shen Yun not only espouses beliefs held by Chinese people since time immemorial on stage, they walk the talk off stage as well, where the artists practice an ancient spiritual discipline known as Falun Dafa.

Minor-Brown appreciated the divinely inspired culture she saw in Shen Yun, including a dance titled “Abetting the Wicked” that depicts a brutal persecution now happening in China against followers of Falun Dafa, who take truthfulness, compassion, and tolerance as their guiding principles.

“I do like that part,” Minor-Brown said, about Shen Yun’s spiritual aspect, “and it’s really easy to follow.”

She said she enjoyed “Abetting the Wicked,” which was interesting for her son as well. “I was following the stories and my son was asking questions along the way so it really kept his attention. And that’s what I enjoy.”

The heritage that Shen Yun aims to restore is another key theme that Minor-Brown appreciated. In Shen Yun’s nearly 20 vignettes, the performance presents legends, scenes from ancient China, bel canto vocal performers, and ethnic and folk dances. Minor-Brown encouraged the artists in their work, and for everyone in the region to take time to see this performance.

“You know what, it’s a history that everyone needs to know about. It’s very important. So to bring it to Philadelphia and to allow people, people travel from all over to come see this show, but it’s so important that everybody knows the history. So I love it,” she said.

“Same here,” Brown said. “It’s very interesting how the show ties in with history and the present day time now, and I really think that’s necessary for individuals to understand exactly where you’re going to is to know where you came from. And like I said, it still helps you stay engaged and it’s attentive enough where my son really enjoys and pays attention too. So it’s a good mix of history with the dancing ensemble. It’s just a very very good show to attend, too. So I’ve been enjoying myself, I’m really enjoying myself.”

“We can’t wait till next year,” Minor-Brown chimed in.