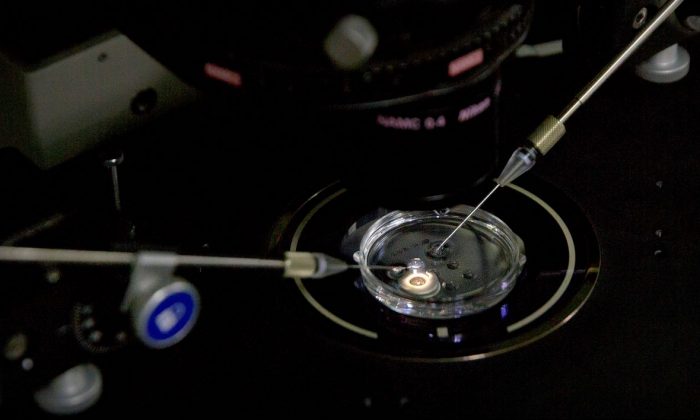 An embryo receives a small dose of Cas9 protein and PCSK9 sgRNA in a sperm injection microscope in a laboratory in Shenzhen in southern China's Guangdong province. (AP Photo/Mark Schiefelbein)
Health

Stanford University has started a review of interactions that some faculty members had with He Jiankui, the Chinese scientist who claims to have helped make gene-edited babies.

Several Stanford professors have said they knew or strongly suspected He wanted to try gene editing on embryos intended for pregnancy.

The work has been widely criticized since November, when He revealed the births of twins whose DNA he said he altered to try to help them resist possible future infection with the AIDS virus.

Most scientists think gene editing for reproductive purposes is too risky to be tried yet because of the danger of harming other genes and because the DNA changes may be passed to future generations.

“I think the most frightening thing is that we would use it in such a way that it transforms the world in a way that walks us right out of our own story,” Dr. William Hurlbut, adjunct professor at Stanford University, on CRISPR. pic.twitter.com/9IdEUL9rTf

He did postdoctoral research at Stanford and began the gene editing project after returning to his homeland for a job at Southern University of Science and Technology of China in Shenzhen.

Several Stanford professors including He’s former adviser, Stephen Quake; bioethicist Dr. William Hurlbut and genetics expert Dr. Matthew Porteus have said they were in contact with He over the last year.

Hurlbut and Porteus said they disapproved of and discouraged any such experiment. Quake said he only discussed the matter in broad, general terms with He.

After He’s work was revealed, Rice University in Houston announced an investigation into interactions between He and his former adviser at that school, Michael Deem.

On Thursday, Stanford spokesman E.J. Miranda said in an email that Stanford is reviewing “the circumstances around Dr. He’s interactions with researchers at the university.” Miranda said he had no additional information on questions about who would do the review, what would be examined and how long it would take.

Hurlbut said Thursday that university officials suggested that he refer inquiries to them instead of responding himself. Porteus declined to comment. Quake did not immediately respond to requests for comment.

SHENZHEN, China—A Chinese scientist who created what he said were the world’s first “gene-edited” babies evaded…

Last month, Chinese investigators said He had evaded supervision of his work and violated research norms because he wanted to be famous. The report said He could face consequences, although it didn’t say which regulations he may have broken.