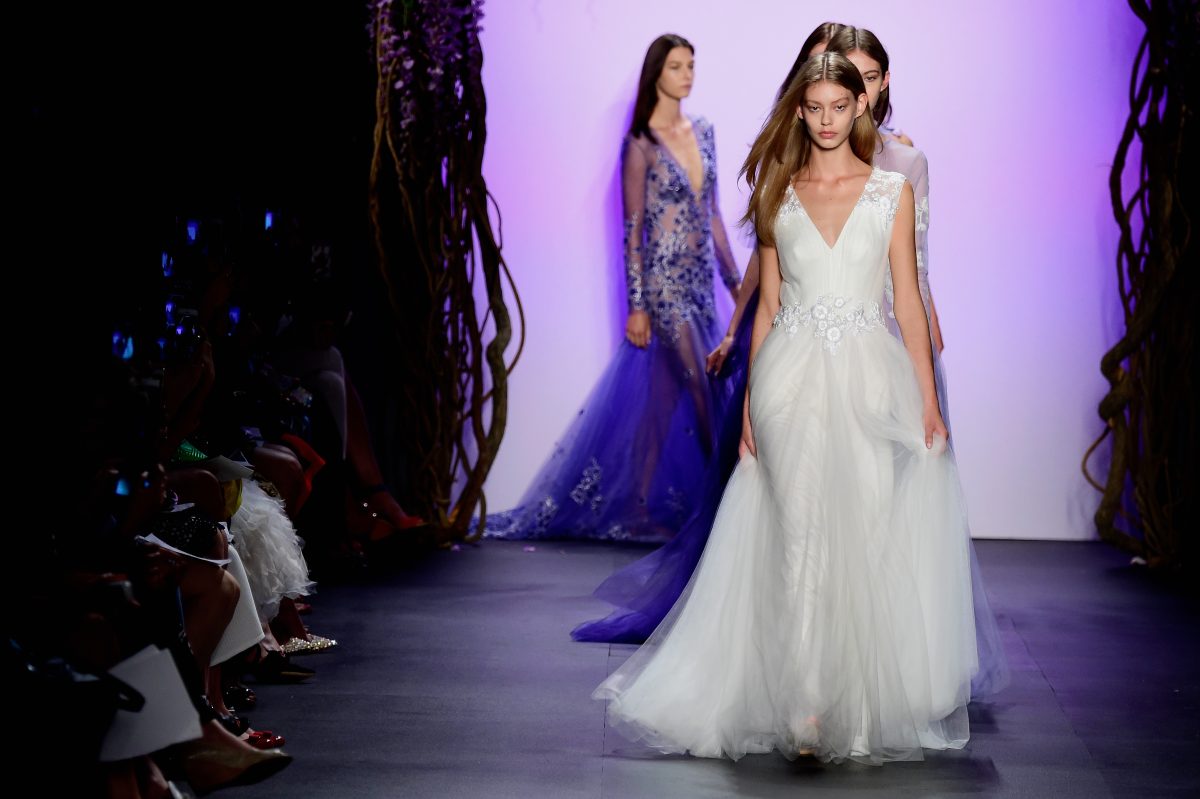 Twice a year, New York City’s intensity button gets turned up a few more notches when the worlds of fashion design, entertainment celebrities and the beauty industry collide. This time of the year it’s more like a melt-down. Fashionistas dream of achieving effortless chic, while designers dream of amassing more fashionistas.

Tadashi Shoji In the Mood for a Japanese Spring

Set against the fluorescent wisteria backdrop, tulle dresses of various lengths evoked the romance of a Japanese garden in Spring and a trip down memory lane for Shoji. The collection also heralded the “it” color of the season, or lack thereof—white. Floral elements were embroidered or appliqued sparingly and sometimes juxtaposed onto geometric mesh. Innovation was not the key, instead, the designer set his sights on crafting and communicating the emotion of his vision through subtle shades of lavender, purple and electric blue.

Jason Wu told Associated Press that he was “very, very” inspired for this collection — by themes such as the photographs of John Rawlings, a prominent fashion photographer who worked from the 1930’s to the 1960’s.
Clean tailoring underpinned dresses with a touch of glamour that were shaped by ruffles and sometimes fringing, in metallic black, blue-gray and silver. His color palette also included rust and forest green. In the latter hue was a lovely coat that opened the show. It had layers around the neckline and was vaguely reminiscent of 1980’s. Another deep green piece was a dramatic snakeskin dress complete with ruffles and butterfly sleeves. Were it not for the flat chunky sandals and minimalist hairstyles, the collection might have erred on the side of being overly retro. But Wu knows how to walk the fine line between being glamorous and modern edgy. His clientele, that includes Michelle Obama, will no doubt appreciate those qualities in this collection.

Be it army uniforms or fishing jackets, whatever the inspiration for the unusual vests in Marissa Webb’s collection, they worked well to mitigate the pretty floral prints. For example the sage green vest synced the waist of a translucent dress covered with dandelions and corn flowers. What stood out was Webb’s mastery of color. Who knew that an indigo floral print dress is so spectacular when paired with turquoise sandals—tassels flying around the ankles in summery nonchalance.

The collection had movement and grace. It beckoned to the inhabitants of the urban jungle to embrace beauty for once. In Webb’s jungle color is king. Case in point, the first model that walked the runway was clad in none other than a pale lilac two-piece suit. There were black and white offerings as well for those who shy away from color. Here too, there were brave juxtapositions of a white lace dress over a black and white plaid slip, pulled together by a licorice short-sleeve jacket. It all worked so well.

Altuzarra Should be Proud

Fashion designers often try to justify their creative choices by going through their sources of inspiration, weaving their explanations into neat little narratives. Why they feel compelled to do that might belong more in the realms of personal therapy than fashion. In fact, most of the time, this isn’t necessary. Would it help Joseph Altuzarra’s clientele to know that he was touched by “the ease and humility” of materials found in the Basque region? His collection was many things, but humble it was not.

The alligator tunic and alligator coat were the epitome of luxe. Perhaps the high-heel espadrilles were meant to imbue the ensemble with some humility. The rest of the collection also veered more towards serious sophistication with dresses and tops embroidered with mother-of-pearl. A sheer black dress covered in white beads was vaguely reminiscent of folk embroidery, but it sure made for an arresting sight. Same with the three white versions—white embellishments on white fabric. This time, the subtle contrasts between the textures of the beads, the mother-of-pearl and the sheer fabric were scintillating and luxurious.

Altuzarra should be proud of this collection and of course proud of his Basque roots—pride would ring more true than humility anyway, especially in the context of New York Fashion Week.