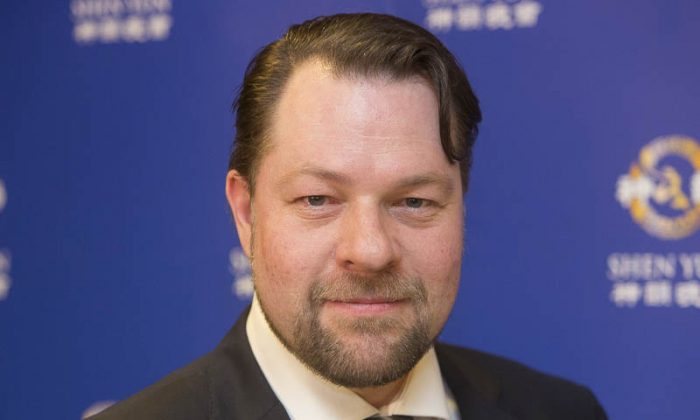 Mr Trippen found the show very different from what he was used to, and it had a profound effect on him.

“One just sits there and thinks WOW. I have to let the show envelope me and take nothing for granted.”

He felt that to truly absorb what was unfolding on the stage one needs to totally relax.
“One has to get to the point where one feels as if interacting with the show and yet be an independent entity.

“Then, ones’ thoughts change and one thinks, now I understand.”

According to Shen Yun’s website, a combination of the world’s foremost classically trained dancers, a unique orchestra and dazzling animated backdrops, create a spectacular performance.

“I was truly impressed by the interaction on stage and the color coordination. Because of that, the show was lively and it was great that they were able to express themselves so freely,” said Mr. Trippen.

Turning to the backdrop and the stage set-up, Mr. Trippen said, “For me the use of the Beamer Technique that helps highlight a story was amazing and fascinating.”

“There was simplicity in the way the technique was used which was charming to the unaccustomed eye. Yet, one could see that it was all done intentionally and formed by inspiration.”

“It was amazing to see high tech and yet a return to the traditional. Also, seeing the past, with an eye on the future was marvelous.”

He continued, “After the show I felt cheerful because there was so much fun in watching Shen Yun. I can’t wait to see next year’s show.”

He said that life is not easy, “but when watching this show suddenly everything in life comes to a halt and one can rest comfortably for the first time in one’s life. One just needs to open the eyes and let go.”

Mr. Trippen says the importance of the performance lays in the fact that one is able to discover new things and then use them to draw a conclusion.

“The ease, with which the dancers float over the stage, and the discipline shown by the performers, is not easy to learn or describe. But, one will keep them in mind and achieve new energy that keeps one going in one’s life.”

Shen Yun has given Mr. Trippen a totally new experience.

“Actually, after the show one feels as if reborn and this show will help the person to charter a new life.”

“All-in-all, it was totally different from what one is used to. Then, that difference was emphasized by the music that originated from a combination of Chinese and Western instruments. One needs to be open to be able to receive it.”