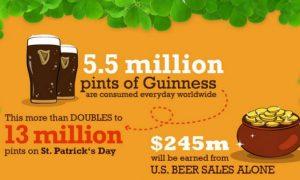 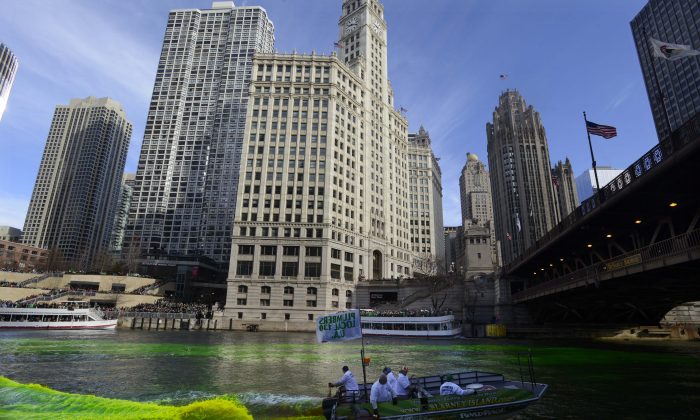 A boat travels down the Chicago River that is dyed green for St. Patrick's Day in Chicago on Saturday, March 14, 2015. (AP Photo/Paul Beaty)
Life & Tradition

Spinach is the green beer drinkers' friend. E142 is not.
By Mary Silver
biggersmaller
Print

In some cities, such as Savannah, Georgia, and Boston, on St. Patrick’s Day rivers of green beer flow.

E142 (also known as brilliant green) is derived from coal tar. Oddly, the European Union allows it. EU is normally stricter than the United States about food purity. In Europe it’s used in candy, gravy, cake mixes, canned peas, and ice cream. Side effects? Oh yes! Hyperactivity, asthma, urticaria, and insomnia. You do not want these symptoms.

It’s banned in Canada, Finland, Japan, Norway, Sweden, and the United States, according to the U.K. food guide.

The FDA has a brain-numbing list of artificial dyes it said are okay, with a mind-numbing list of cautions. So even those that are not banned here have some questions attached.

Most artificial food dyes are not ideal, and E142 is a flat out bad actor. At least in America we need not run into it.

Most artificial food dyes are not ideal, and E142 is a flat out bad actor.

The ones that are harmless are the ones people have used since the days of the old Silk Road. For example, turmeric, for yellow, and saffron, the world’s most expensive spice, for yellow. Some ancient natural dyes are made from insects, truly! That’s cochineal. But insects are not used to make beer green.

“It’s used to color your food and it’s safe, delicious, and healthy! The chlorophyll in leafy greens are a terrific way to color your foods while making your favorite foods even more healthful,” stated Institute of Food Technologists spokeswoman Kantha Shelke, Ph.D., CFS, in a press release.

Not A Fan of Green Eggs and Ham? Try these 5 Green St. Patrick Day Desserts

Another green drink method is to put bright blue curacao into a yellow base, such as pale orange juice.  It make a nearly neon green drink, according to a server at iconic Mary Mac’s Tea Room in Atlanta, describing a St. Patrick’s Day cocktail special.

Chicago dyes its river green with 45 pounds of vegetable dye dumped from flour sifters and frothed up by a motorboat. The effect lasts five hours, and is harmless. This year 400,000 people turned out to watch it on Saturday, March 14, according to ChooseChicago.com.

There is also good drinking and bad drinking.

St. Patrick is not actually the patron saint of boozing it up.

Stay safe. St. Patrick would want you to.

Enjoying a glass and a chat with a friend is good drinking. Downing enough to lose your inhibitions and your lunch is bad drinking, even if you only do it once a year. Because that one binge might be the one that leads to a humongous error in judgement, a fight, or an accident.