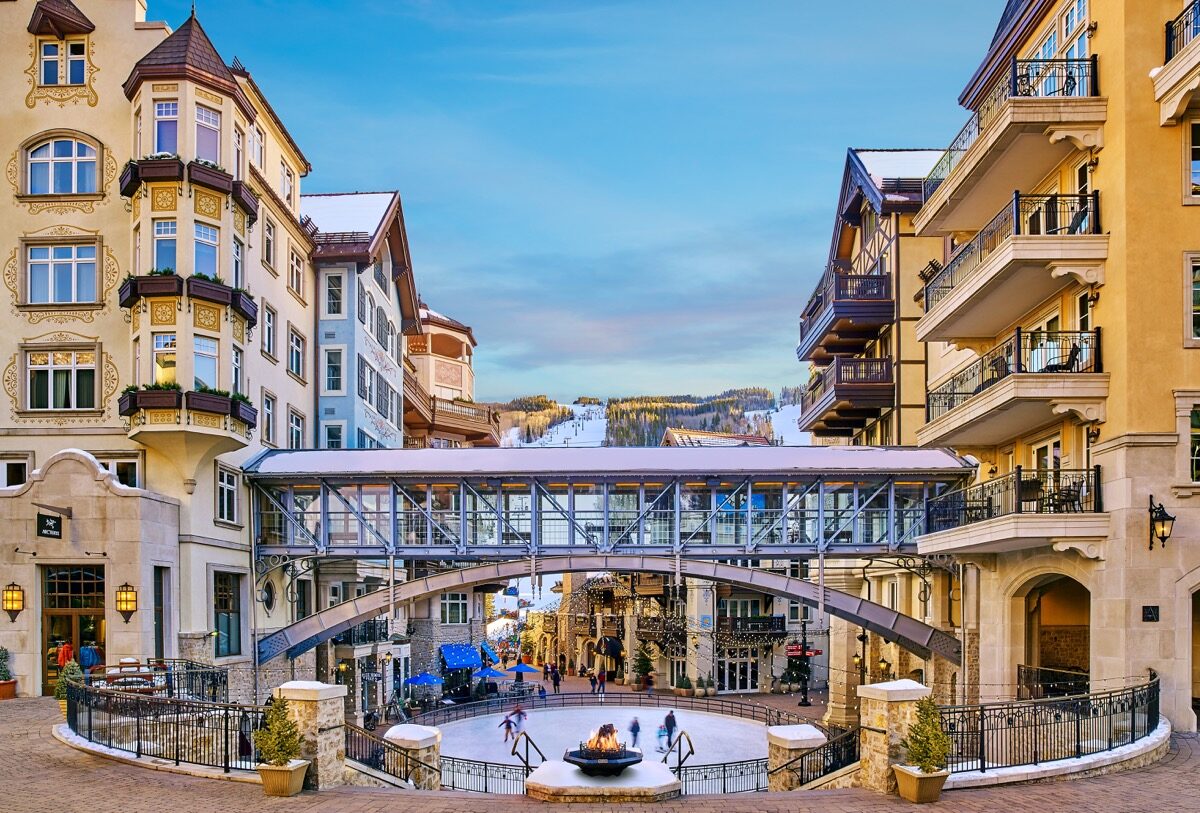 The resort village of Lionshead, one of the four Vail Base areas. (Vail Resorts)
Travel

Despite the warm spring weather at the resort’s base, nearly 100 percent of the 5,317 acres at Colorado’s largest ski resort were still snow-covered. The hot weather softened the snow into a wet slush, making my skis’ metal edges feel like knives cutting through warm butter.

Welcome to spring skiing and boarding in Vail!

At night, the slushy moisture refreezes, and the resort’s crew members use their maintenance tools to blow new snow and groom it into a grippy corduroy surface. This spring cycle repeats as the snow melts during the day, then refreezes at night.

From the summit are 360-degree views of endless Colorado peaks. The landscape is wide open with a sharp contrast between the white mountains and blue sky. I giggled and hooted as I sped down the front side’s wide and gentle groomers and was humbled by the steep pitch and sheer enormity of the Back Bowls. Each bowl is more acreage than an entire average-sized ski resort, and there are seven of them!

The very next day, storm clouds rolled in bringing colder temperatures and a half foot of fresh powder. With each run, my skis disappeared beneath the white fluff, producing that addictive euphoria known to ski enthusiasts.

While the crowds seem to prefer visiting during winter holiday weekends, there’s no doubt that spring is my favorite season to ski. In these coveted few weeks, daylight lasts past dinner, the weather is temperate, faces bronze (or burn without sunblock), lift lines are short, and the fresh powder is abundant. It’s common to see fellow revelers on the mountain in shorts, costumes, and other bits of flair such as Hawaiian luau gear.

Vail decided to extend this season for the first time to May 1, to show appreciation to their resort community.

Vail is easily the ski industry’s most recognizable brand, famed for this iconic namesake resort, the acquisition and management of dozens of mountains around the world, and pioneering the multi-resort Epic pass. However, its founding is a classic tale of American passion and entrepreneurship.

In preparation for World War II, the president of the National Ski Patrol convinced the War Department that the U. S. Army would need to be ready for alpine warfare, and it would be easier to recruit and train skiers to fight than teach soldiers to ski and navigate mountains.

Thus the Army’s 10th Mountain Division was formed and opened Camp Hale in 1942 near the not-yet established Vail to prepare for mountain combat. The training for this talented ski brigade was grueling.

The 10th went on to take heavy casualties in the mountains of Northern Italy during Operation Encore where they surprised the Nazis overtaking them on Riva Ridge and then on to Mt. Belvedere. The 10th is credited with turning the tide of the Italian alpine front, and their mountain skills, preparedness, and fitness proved crucial to their success.

After the war, veterans of the 10th Mountain Division are credited with creating the modern American ski industry, having built or held key leadership roles in over 60 American resorts.

One such veteran was Pete Seibert, a talented ski racer badly injured in the war. He was told he wouldn’t walk again. With grit and determination, he proved the doctors wrong, and then took advantage of the GI Bill to study hospitality in Switzerland.

More than anything, Seibert wanted to start his own ski resort, and having already overcome considerable adversity, he had the can-do attitude he needed. He teamed up with friend and Colorado native Earl Eaton, who took him on a now-famous seven-hour hike of a mountain with no name that rose above a nondescript valley along the highway near numerous family-owned ranches.

Seibert was blown away by what he found at the summit, which was hidden from the valley below. There were wide-open snowy basins in every direction, at every pitch, from steep to gentle. They knew this was the perfect site to open a ski resort. To not be stymied by competitors, Seibert operated in stealth mode when he bought the land from local ranchers, telling anyone who asked it was to be a fishing and shooting club.

Seibert had a talent for raising capital, marketing, and had a vision for a ski experience that would be similar to the areas he observed in Europe, with their quaint streets and lodges. Eaton was experienced with engineering and construction projects. And of course, they were both great skiers.

The team created their new resort in 1962 within U.S. National Forest lands and named it after Charles Vail, the chief engineer of the Colorado Highway Department from 1930 to 1945, who built the roads that made access to these mountains possible. Early investors paid a mere $10,000 for a condo and a lifetime ski pass! Now it’s not uncommon for a condo to be worth over $10 million in one of the world’s most sought-after alpine real estate markets.

And what started with just two chair lifts and a gondola on opening day in December 1962, has now grown to 32 lifts and millions of annual ski visits.

It wasn’t just Vail’s founders who created this distinct European mountain vibe in Colorado. Another was the Faessler family. They first opened an inn in the Bavarian Alps of southern Germany in 1919. Three generations later, it would transform into a luxury mountain retreat with gourmet food and limitless recreation. The Faesslers would then open a second outpost in the town of Vail in 1979.

As capital investment and worldwide popularity of Vail grew, so did the Faesslers’ hospitality operation. Today in its fifth generation, their Sonnenalp Resort is right in the heart of Vail Village. And while Vail has accommodations from all the major hoteliers, this only highlights the authenticity of the family-owned and operated Sonnenalp.

When I visited recently, there was a buzz as the friendly staff members were preparing for a wedding reception. From the interior design, the staff uniforms, and the mountain views, one is transported to Bavaria.

In the King’s Club lounge a guitar player crooned folk favorites as guests enjoyed the fireplace and cocktails. Off in an adjoining dining room is the famed Bully Ranch. I was seated in a corner table and enjoyed a beer, the whipped ricotta appetizer with toast made fresh in the wood-burning oven, and the elk and Barolo bolognese for dinner.

Our waiter Spencer was friendly and outgoing and eager to share how the Faessler family personally knew all the employees by name, provided staff housing within walking distance of the hotel, and routinely gathered the front-line staff to hear directly how they could continually improve the guest experience.

The hotel has five other restaurants, a full spa, an outdoor pool, and hot tub, and a nearby golf course that overlaps in timing with the ski season as the resort flips from spring to summer mode.

It was the passion, timing, and risk-taking of folks like Pete Seibert, Earl Eaton, and the Faesslers who made this overlooked valley into the world’s most famous ski resort. While inspired by the Alps, it’s authentically American in its gusto and exceptionalism.

Getting There: Fly direct to Eagle airport, which is a short ride to Vail, or fly into Denver International Airport (DIA) and take a shuttle or rent a car. If you opt for DIA, arrange your timing to cruise during the daytime to enjoy the views that start in the arid high plains of Eastern Colorado, go past the city of Denver, through the Eisenhower Tunnel at the Continental Divide, and descend down into the Vail Valley.

Where to Stay: There’s a large variety of options, from condos to hotels. My vote goes to the Sonnenalp.

Skiing and Lessons: If you’re going to ski for more than three days, Vail Resorts makes it cheaper to buy a season pass than to pay per diem, and then you can ride without any blackout dates at 38 North American Resorts and over 80 globally. Regardless of your skiing level, a lesson is a great way to be guided around the mountain.

The author was a guest of Vail Resorts Management Company.