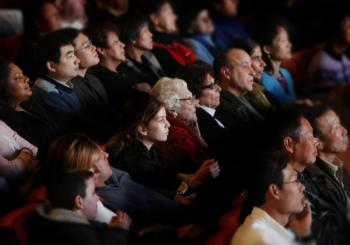 NEW YORK—Mr. Lewis, a forensic accountant, saw the Divine Performing Arts with his editor wife at New York’s Radio City Music Hall on Saturday January 24. “Very colorful, great music, lot of hard work put into it, ” said Mr. Lewis, who works as a financial investigator, “The visuals on the screen are really terrific”. Mr Lewis said he knew little about Chinese culture but the show, with its insights into China’s five thousand year history, had inspired him to explore it further.

Chinese culture, he had always believed, was far removed from his world but after seeing Divine Performing Arts, Mr Lewis said he was now intrigued. “Whether its a beautiful countryside, and a father and a daughter and a Monkey King, whatever it is, there's things that are not a part of my life, although they could be. These things are very interesting to me.”

The more spiritual aspects of the show were also interesting, he said. “Clearly, there's a spiritual side to the show, even in the name, “Divine.”, and the scene … where the oppression and persecution occurs. It was a very touching moment when they conclude, well, we all wind up in heaven anyway. So, I didn't know that would be apart of it but its there, and its helping me learn about the Chinese culture.” He was responding to Heaven Awaits Us Despite Persecution, in which the fantastic scenes that ultimately unfold in this piece present a message of hope and bespeak of a longstanding Chinese belief that good people are ultimately rewarded, even if not in this lifetime.

“It makes me realize that I would have to learn about the Chinese culture,” he said, concluding that the whole performance was “colorful, the music is great, and I'm really enjoying it. I am very glad I came.”

Mrs. Lewis works as an editor at the United Nations. She also loved the show. “I agree with everything he said, but like to add [that] I find it very beautiful,” she said.

Mrs. Lewis was particularly taken with the unity displayed by the performers. "What I noticed was the teamwork they do. I think the Chinese people, as a whole, don't want to show themselves as an individual, but as a people because together, they bring a very, very, very visual, colorful, strong result. That's what I see the most … the teamwork.”

Sound of Hope Radio contributed reporting for this article.