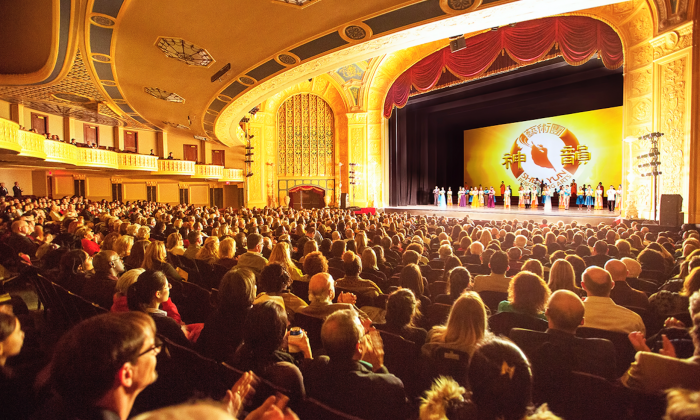 DETROIT—Gail Stamp was so excited after seeing Shen Yun Performing Arts at the Detroit Opera House on Jan. 3 that she couldn’t wait to share the whole experience with her husband.

“The spiritual part really touched my heart,” she said.

Shen Yun brings the ancient and divinely bestowed culture of China to the stage through classical Chinese dance and traditional music.

Ms. Stamp, a dental hygienist, had been wanting to see Shen Yun for a few years, but this year she and co-worker decided to go.

From the beginning of the performance to the end, the divine’s hand in human affairs is acknowledged. Each of the evening’s individual songs or dances highlights some cherished value of traditional Chinese culture—compassion, loyalty, kindness or bravery—often by telling a story.

“We’re talking about God here,” Ms. Stamp realized. “That was really great, I loved that part,” she said, as she was about to leave the theater.

Ms. Taylor, an engineer, felt the performance was breathtaking and flawless. For her each costume wowed her “scene after scene, dance after dance—loved it.”

But Mr. Taylor, a salesman for dental supplies, took the conversation after the performance another direction: “But in addition to the costumes and the dancing, there was also the story, the different themes, and also the introducing of their religious culture, from the standpoint of their thoughts on creation, on God.”

He thought it was amazing how the traditional Chinese beliefs mirrored spiritual beliefs around the world, yet had their own distinctive character.

Mr. Taylor believes that religion gives people a starting point, a moral compass which grounds people. Without such a starting point, people are potentially dangerous, not only to social order to but world order.

In Shen Yun he saw the same theme appearing throughout: good people trying to hold on to their beliefs and culture and those determined to suppress or take those beliefs away.

“The suppressor [was] trying to take away anything that would give hope to human society and to individuals,” he said.

Both felt that the performance overall focused on hope.

The last piece in the program is called “Hope for the Future.” Ms. Taylor “just thought that summed it all up very nicely, the entire production.”

Because Ms. Taylor learned so much about Chinese spiritual beliefs and their history, she felt both entertained and educated. “That’s a win, win. Yeah, you can’t get any better value than that,” she said.