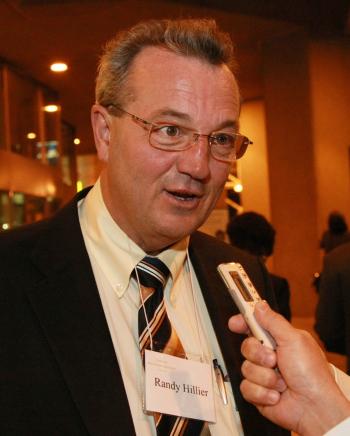 Mr. Randy Hillier is a politician who places a premium on values—values which he found conveyed through the traditional Chinese stories, music, and dance of the Divine Performing Arts Mid-Autumn Spectacular. The performance was held at Toronto’s John Bassett Theater on Sept. 25.

“You’re reflecting the whole time,” said the Conservative Member of Provincial Parliament for Lanark-Frontenac-Lennox and Addington. “I started thinking and reflecting from the very first scene. The very first performance and each one made you think a little bit deeper and a little bit more as you went through the show.” Hillier lives just outside of Perth with Jane, his wife of 26 years.

He decided to run for office last year. Mr. Hillier said he made his decision, because “I like to put the effort in to make sure that [things] get better. I’ve done many things too, as an activist, over the years. When I see injustice I like to stand up and fight against [it],” he said.

In reflecting on traditional Chinese values, the hallmark of Divine Performing Arts performances, Hillier commented that they are, “fundamental values for all people who believe in justice, in those noble values, morality, patriotism, overcoming hardship.”

“To me, those are universal to sensible, reasonable people no matter where they live. And it was quite enjoyable to see,” he added. “I find there are similar overriding messages as well that I wasn’t totally aware of in Chinese culture, that, I think, parallel with Christians and western culture as well.”

“My favourite performance was the one with the nine suns, [Lady of the Moon]. That was about overcoming hardships and terrible turmoil but still having love. The show was colourful and entertaining, but also the message was absolutely terrific.”

Mr. Hillier also said he was surprised to see traditional Chinese culture portrayed in the performance because what is typically shown is only communist era culture.

“I was really quite surprised by the culture because it’s part of the Chinese that we don’t understand and don’t see very often. I’ve never seen it before. The subtle rhythms and movements were excellent. For someone like myself who has never visited China—I’ve read books about China and our knowledge is from the last hundred years or so. We don’t have a fuller understanding of what it was like there before, and I think this brings it out nicely.”

In addition to being an evening for reflection, Mr. Hillier said he was also highly entertained. “There are different elements in the whole show. There’s the just the pure entertainment part as well,” he said. “From an entertainment point of view, I thought the performance with the drums was excellent.”

“It’s interesting how they can convey a message in a story without words, without lyrics, but just with music and with movements,” said the MPP.

As for his overall assessment? “Absolutely terrific!”

The Mid-Autumn Festival is one of China’s most ancient and cherished holidays. The Spectacular expresses Chinese classical dance and showcases authentic traditional Chinese culture. Through background scenery, costumes, and choreography, the Spectacular expresses truthfulness, compassion, and pure beauty. China’s history comes to life in this gorgeous performance that is entertaining, inspiring, and uplifting. The content of all programs is presented in both Chinese and English. For more info, visit DivineShows.com/Toronto .