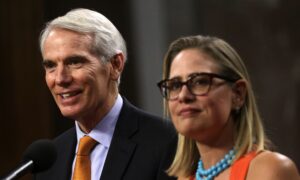 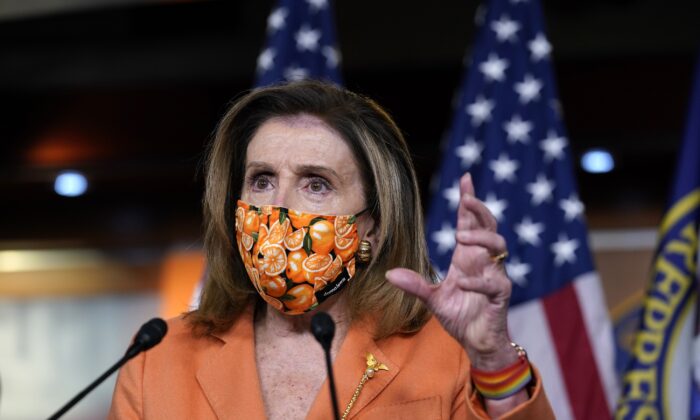 Speaker Pelosi Speaks on Democratic Priorities in the House, Afghanistan

The House used a parliamentary procedure to pass a rule on Sanders’s budget proposal to pass it without any GOP votes. In a 220-212 party line vote, the House sent instructions to relevant committees to write legislation in accordance with the budget’s appropriations.

Afterward, the House took up HR4. Republicans railed against the legislation as a federal takeover of election laws that would unfairly benefit Democrats. In a last-ditch effort to stop the legislation, GOP leadership demanded a recorded vote to send the bill back to the Judiciary Committee and to postpone voting on the legislation. This move was rejected by every House Democrat and the bill was promptly passed in another 220-212 vote.

Since these decisions, Pelosi said, state-level Republicans have waged a campaign aimed at “suppression of the vote” and “nullification of elections.” This charge has been a key Democratic talking point since after the 2020 presidential election, when GOP state houses began passing new election laws to address concerns about voter fraud.

Pelosi claimed that “the GOP wants to suppress the vote among people of color, but they are suppressing the vote among everyone else too.” She said that through these alleged voter suppression laws, “Republicans want to contract freedom” and to “resurrect … their Jim Crow world.”

HR4, written with the help of the late John Lewis, would address these efforts by reinstating provisions of the Voting Rights Act that were struck down or limited by the Supreme Court.

Pelosi then turned briefly to the budget resolution.

She said that some Democratic priorities moving forward with the passage of the resolution would be workforce development, helping women in the workforce through programs like government-paid childcare, and “address[ing] the climate crisis.” The Speaker set an ambitious time table to achieve these wide-ranging goals, saying House Democrats hoped to have every committee ready with legislation by Sept. 15.

A focus of these committees, said Pelosi, will be to write a bill acceptable to the Senate. This is an expected move, as some Senate moderates—Sens. Joe Manchin (D-W. Va.) and Kyrsten Sinema (D-Ariz.)—have expressed reluctance or have outright refused to vote for the huge package.

A spokesman for Sinema, John LaBombard, said that “proceedings in the U.S. House will have no impact on Kyrsten’s views about what is best for our country—including the fact that she will not support a budget reconciliation bill that costs $3.5 trillion.”

Manchin said in a statement on Twitter earlier this month that, “given the current state of the economic recovery, it is simply irresponsible to continue spending at levels suited to respond to a Great Depression or Great Recession.”

While Democrats achieved a major victory yesterday that broke a weeks-long stalemate between House moderates and House progressives, the budget bill the House produces will still face a significant challenge when it comes through the Senate.

Pelosi also did not promise that the bill would be fully paid for, a promise oft-repeated by congressional Democrats since the budget’s introduction. Pelosi said, “we want to pay fully for this bill … [but] we’ll see what is possible.”

Afterward, Pelosi took a few questions from reporters. Several focused on the ongoing crisis in Afghanistan.

She said that her “hopes and thoughts and prayers are with the people there” and emphasized that the Taliban will have to protect women’s rights “if they hope to participate in the global community in a meaningful way.”

One reporter asked whether it was a mistake to leave the country by President Joe Biden’s Aug. 31 deadline with so many Americans and Afghans still trapped in the country.

“The judgment about leaving is a judgment that the president has made, and he has to balance the equities of ‘what is the threat to our military and the people at the airport’ versus the advantage of staying,” she responded. “I think … more will unfold in that regard.”

She said that in a Democratic caucus meeting yesterday “people really wanted to encourage the president to stay longer.”

Biden was blasted by House Republicans Tuesday for his handling of the Afghanistan crisis, and this response by Pelosi is unlikely to satisfy members of both parties who feel that the Aug. 31 deadline is simply too early.

Finally, Pelosi was asked about the weeks-long stalemate with Democratic moderates.

“I respect our members and their views, but at the end of the day what had to prevail was the president’s vision and the needs of America’s working families, and [the moderates] saw that,” she responded, adding, “The steam that was in our caucus was to get [this legislation] done … and our unity was our power.”