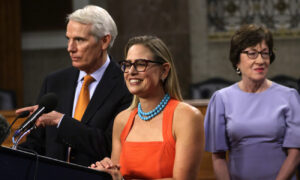 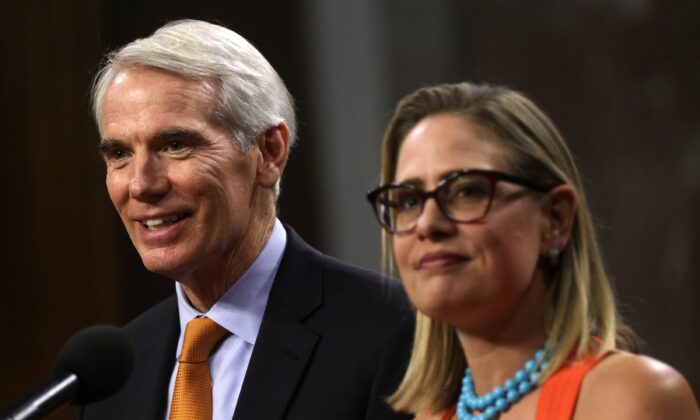 Sinema was one of the senators who helped negotiate the $1.2 trillion infrastructure package recently passed in the Senate. Centrist House Democrats are calling on Speaker Nancy Pelosi (D-Calif.) to pass the infrastructure bill on its own and not force a vote on the costly $3.5 trillion budget resolution.

The bipartisan infrastructure bill “is a historic win for our nation’s everyday families and employers and, like every proposal, should be considered on its own merits,” said Sinema spokesman John LaBombard. “Proceedings in the U.S. House will have no impact on Kyrsten’s views about what is best for our country—including the fact that she will not support a budget reconciliation bill that costs $3.5 trillion.”

While the speaker had scheduled a vote on both the $3.5 trillion and $1.2 trillion bills for late on Aug. 23, a group of moderate Democrats has told Pelosi that they wouldn’t vote to approve the $3.5 trillion measure and that a vote should be held on the infrastructure bill alone.

Pelosi told her caucus that the majority of their party members want to pass both bills and that is why she will hold a vote for both spending bills.

“We must not squander our Congressional Democratic Majorities and jeopardize the once-in-a-generation opportunity to create historic change to meet the needs of working families,” the speaker said in a statement.

Besides Sinema, Sen. Joe Manchin (D-W.Va.) also said he is seriously concerned about injecting more stimulus money into the economy since the economic recovery is showing that more stimulus won’t help fill jobs.

“The challenge we now face is different: millions of jobs remain unfilled across the country and rising inflation rates are now an unavoidable tax on the wages and income of every American. … Given the current state of the economic recovery, it is simply irresponsible to continue spending at levels suited to respond to a Great Depression or Great Recession,” Manchin said in a statement.

At least nine House Democrats share Manchin and Sinema’s view, and a group of moderates sent Pelosi a letter on Aug. 12 in which they called the infrastructure bill “a bipartisan victory for our nation” and rejected a two-track approach.

“We will not consider voting for a budget resolution until the bipartisan Infrastructure Investment and Jobs Act passes the House and is signed into law,” the letter concludes.

Pelosi originally responded to the efforts by the nine—Reps. Josh Gottheimer (D-N.J.), Carolyn Bordeaux (D-Ga.), Filemon Vela (D-Texas), Jared Golden (D-Maine), Henry Cuellar (D-Texas), Vincente Gonzalez (D-Texas), Ed Case (D-Hawaii), Jim Costa (D-Calif.), and Kurt Schrader (D-Ore.)—as “amateur hour.” But since then, the nine have stood strong in their commitment outlined in the letter and have been in negotiations with the speaker and the White House.

The situation has intensified as several representatives have reiterated their commitment to not passing the budget before the infrastructure bill.