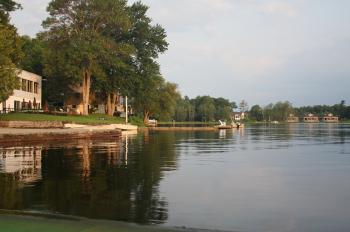 A family enjoys an afternoon cruise on Sparrow Lake. (The Epoch Times)
Travel

A Lakeside Resort That’s ‘All about Family’

By Wayne Marshall
biggersmaller
Print
PORT STANTON, Ont.—For 110 years, the Stanton family has welcomed guests to its resort nestled along the shores of Sparrow Lake north of Orillia, Ont. There’s a sense of community and tradition here, and perhaps that’s what’s helped make Bayview Wildwood Resort a tradition for many families, including those we spoke with during our stay.

Bayview Wildwood offers 76 rooms, suites, and cottages. Packages, all of which include meals, start at $152 per person per night. Most include a free stay for kids.

The resort boasts a wide array of outdoor activities — from canoeing, kayaking, and mountain biking to tennis, baseball, and volleyball. Motorized boats and water skis are also available.

The highlight, though, may be the wealth of organized activities. During the summer, the resort arranges close to ten activities each day, ranging from euchre and bocce ball tournaments for adults to cupcake and teddy bear making for kids – even the unusual, like a game of football played in the water with a greased up watermelon.

Some activities – such as the weekly watermelon football and baseball games – pit staff against guests. Evenings include entertainment by musicians and comedians; there’s a cashless casino on Saturday nights.

We spoke to Aileen and Bob, a couple from North York who’ve been coming to Bayview Wildwood for thirty years and stayed in the cottage next to ours.

“This is the first time we’ve come without our kids,” Aileen told me. The family visits the resort in the summer but also returns during the winter when activities like ice fishing and snowshoeing are popular, she says.

Aileen and Bob are not alone. Many of the families here have been coming for decades.

When I spoke to the resort’s owner and manager, Dianne Hounsome, she told me she’d seen two families the night before who’d been coming for more than a generation.

“In the summer, it’s all about family,” Dianne told me, describing how the summer program is designed with family fun in mind, which keeps families coming back.

With many regular patrons, Bayview Wildwood remains a bustling place. But that doesn’t mean the resort has been immune to the high Canadian dollar and soaring fuel costs, each of which has deterred some visitors from the U.S. Having one of the rainiest summers on record hasn’t helped either.

“I’ve never seen a year like this,” Dianne says. “It’s never been this slow.”

Guests agree. Aileen tells me in the past it was normal to line up to use the amenities. Not this year. My wife and I walked up to the beach at mid-day to take our choice of kayak. Finding an open tennis court on a Saturday afternoon was no problem either.