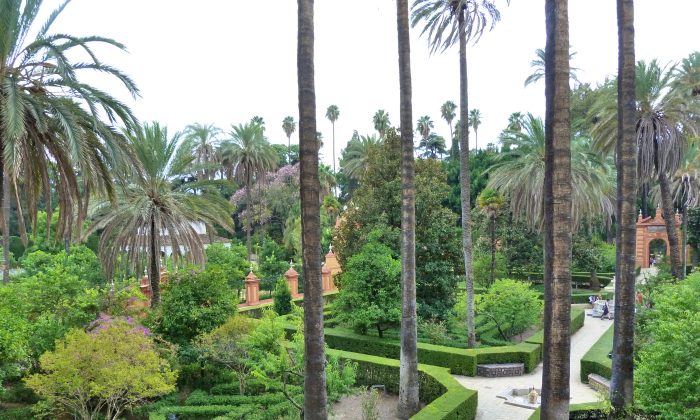 The gardens at the Alcázar in Seville. (Manos Angelakis)
Destinations

Andalucía in southern Spain is a land of bullfighting and dancing horses, flamenco and exotic architecture, and warm, welcoming people.

Andalucía is the largest of Spain’s 17 autonomous regions, located between the Sierra Morena Mountains and the Mediterranean Sea. In fabled Andalucía, east melded with west in perfect synchronicity; here, an exotic stew of Gypsy, Jewish, Moorish, and Christian peoples existed in peaceful coalition for eight centuries, achieving extraordinary heights in the arts and sciences.

As early as the 6th century, Jews arrived in northern Spain, purportedly descendents of King David’s lineage. Eventually they migrated south to Andalucía to enjoy the favourable conditions established by the Moors, who conquered the Iberian Peninsula in 711 A.D. In the 9th century, Romani people (Gypsies) migrated from Rajasthan in Northwest India to settle in Iberia.

The Plaza de Toros in Ronda is one of the oldest and most picturesque bullfighting arenas in Spain. Built in 1785, it has a museum dedicated to the history of bullfighting as well as a chapel, where prayers for victory were offered before a bullfight, and thanks for success were offered after.

In Ronda we stopped for lunch at the eponymous Pedro Romero restaurant, which honours one of the most famous bullfighters in Spanish history. Romero is credited with inventing the “classic style,” turning bullfighting from a killing sport into an art form.

Romero came from three generations of bullfighters. His grandfather, Francisco, is generally considered the founder of modern bullfighting. He was the first matador to fight a bull on foot and use a red cape to provoke the bull. Previously, all bullfighting was done from horseback.

These days the plaza isn’t used much for bullfighting, apart from a week in September for the Feria de Pedro Romero, an annual festival dedicated to the legendary bullfighter.

The main attraction of the festival is the bullfight, which takes place on the first Saturday of the month. The bullfight is preceded by a procession of horse-drawn carriages through the streets of Ronda, with everyone dressed traditional in 18th-century Goyesque costumes.

Andalucía also has a strong equestrian heritage. While bulls represent a form of man’s mastery over nature, horses represent cooperation with man.

The Andalucían purebred horse has existed in the area for 20,000 to 30,000 years, and cave paintings of the animals attest to their history on the Iberian Peninsula. Moorish fighting horses from North Africa were interbred with the Spanish horse to become the elegant animal we see today.

The Royal Andalusian School of Equestrian Art was founded in 1973 in honour of Andalucía’s equestrian history. Located in Jerez, a small town between Sevilla and Cádiz, one of the foundation’s most popular attractions is a show called “How the Andalucían Horses Dance.”

For the show, the horse and rider train together and form a bond of trust that allows the horse to accomplish artistic moves or “dressage” that would not normally be possible. The riders, adorned in 18th-century costumes and the horses in classically braided mane and tail, together perform a ballet to Spanish music in sync with other horses.

Another form of dance—and my particular personal favourite—is flamenco. This fiery and emotional assemblage of feet, hands, body—and attitude, attitude, attitude—all set to music, makes me want to jump out of my seat and join in the action.

Flamenco’s history is as complex as its presentation, with the most famous performers being Gitanos (Gypsies), known for their power and passion. They bring to their art the oppressed minorities’ expression of grief and the lament of persecuted ethnicities.

Gitano flamenco performers regard the Cante Jondo (profound or deep song) as a form of prayer with the object of achieving the state of “duende,” an intensely focused trancelike state of emotion. Federico Garcia Lorca in 1933 described it as “Los sonidos Negros,” or the dark sounds. The Baile Grande is a profound dance that closely resembles classical Hindu movements which the Gypsies brought with them from the Indian subcontinent.

As for architecture, the Moors contributed stunning architectural monuments, one being the Alcázar in Seville, Andalucía’s capital.

Originally constructed in the 10th century by Moorish Muslim kings, the royal fortress is renowned as one of the most beautiful in Spain and an outstanding example of the Mudéjar architecture found on the Iberian Peninsula.

The kings’ ardour for interior courtyards filled with verdant gardens, fountains, and colourful tiles with geometric designs lining the walls and floors is nowhere more breathtaking than in the Alcázar.

The upper levels of the Alcázar are still used by the royal family as their official Seville residence. A UNESCO World Heritage Site, it is the oldest royal palace still in use in Europe.

Tourist Board of Andalucía: www.andalucia.com