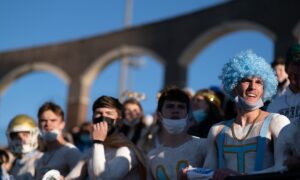 A prominent South Carolina lawyer who claims he was shot in the head on Sept. 4, just months after his wife and son were murdered, has said he plans to resign from his role and enter rehab.

Alex Murdaugh, a prosecutor for the 14th Judicial Circuit, discovered the bodies of his wife Margaret, 52, and his son, Paul, 22, at their hunting estate in Colleton County back in June.

The 53-year-old lawyer worked as a partner at Peters, Murdaugh, Parker, Eltzroth, and Detrick (PMPED) in Hampton, which was founded by his great-grandfather more than 100 years ago.

In a statement to Live5News through his lawyer, Dick Harpootlian, Murdaugh said he would be resigning from the firm and seeking treatment to deal with the trauma of the shooting deaths of his wife and son.

“The murders of my wife and son have caused an incredibly difficult time in my life. I have made a lot of decisions that I truly regret. I’m resigning from my law firm and entering rehab after a long battle that has been exacerbated by these murders. I am immensely sorry to everyone I’ve hurt including my family, friends, and colleagues. I ask for prayers as I rehabilitate myself and my relationships.”

Murdaugh did not specify the exact treatment he would be seeking or the nature of his stay in rehab.

His decision to step down also comes after he was accused of misappropriating funds from his law firm.

PMPED issued a statement to some media outlets on Friday stating that Murdaugh had stepped down after violating the companies’ standards and policies.

“On Friday, September 3, 2021, Alex Murdaugh resigned from the Law Firm. He is no longer associated with PMPED in any manner. His resignation came after the discovery by PMPED that Alex misappropriated funds in violation of PMPED standards and policies.”

The statement continued: “A forensic accounting firm will be retained to conduct a thorough investigation. Law enforcement and the SC Bar have been notified by PMPED.

“This is disappointing news for all of us. Rest assured that our firm will deal with this in a straightforward manner.

“There’s no place in our firm for such behavior. Due to the ongoing investigations into these matters and client confidentiality, PMPED cannot comment further at this time.”

Days before his resignation, Murdaugh claims to have been shot in the head on a rural road in Hampton County, according to a statement from South Carolina Law Enforcement Division (SLED) spokesperson.

Officials say they received a 911 call from Murdaugh at around 1:34 p.m. on Saturday. Murdaugh told the dispatcher that “he had been shot on Old Salkehatchie Road near Varnville, South Carolina, in Hampton County.”

Murdaugh was taken to a hospital in Savannah, Georgia, where he was treated for a “superficial gunshot wound to the head,” the statement said.

As of yet, no arrests have been made, officials said.

Meanwhile, no arrests have been made in the deaths of Maggie and Paul, who were shot multiple times before being discovered by Alex outside their residence on June 7 at around 10 p.m.

At the time of his death, Paul was awaiting a hearing for a charge of boating while drunk, which caused the death of 19-year-old Mallory Beach in February 2019.

Paul had been charged with three felony counts of boating under the influence. He had pleaded not guilty to all counts.

The charges were dropped last month but the investigation will continue, the Island Packet reported.

The family announced a $100,000 reward for information leading to the conviction of the person or persons responsible for the deaths of Maggie and Paul, WCSC reported.