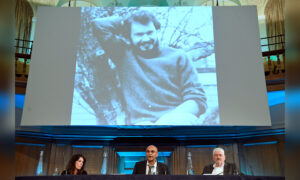 Police tape is seen in this stock photo. (Carl Ballou/Shutterstock)
US News

A prosecutor from one of South Carolina’s most prominent legal families found his wife and son killed by gunfire near their property earlier this month, police announced.

State Law Enforcement Division (SLED) issued a release about their investigation into the deaths of Margaret Murdaugh, 52, and Paul Murdaugh, 22.

Authorities said that on June 7 around 10 p.m., Alex Murdaugh, a prosecutor for the 14th Judicial Circuit, called 911 and told the dispatch center that he found the bodies of his wife and son outside their residence.

Police arrived at the location and started a double murder investigation.

“Deputies immediately responded to the location where it appeared that Paul and Maggie had both sustained multiple gunshot wounds,” SLED said in a release.

“SLED agents have been working the case continuously since arriving on the scene with the assistance of the Colleton County Sheriff’s Office deputies and others, and that work continues. We continue to pursue all leads and the investigation is certainly active and ongoing at this time. We will continue to submit all forensic evidence to SLED’s forensic lab.”

The victims were attacked between 9 and 9:30 p.m., a county coroner said.

Paul Murdaugh was awaiting a hearing for a charge of boating while drunk, which caused the death of 19-year-old Mallory Beach in February 2019.

The charges will be dismissed after his death, but the investigation will continue, the Island Packet reported.

“We had every intention of moving forward with Paul Murdaugh’s prosecution,” the sate’s Attorney General office told the outlet. “While the charges against him will be dismissed, the case has not been closed because the investigation is not finished.

Jim Griffin, Murdaugh’s attorney in the preliminary hearings for the case said that the secrecy over the murder probe and the ongoing investigation could be a sign of a connection.

“I can understand that they would not want to open the investigative file to disclosure because there may be information related to the murder investigation,” Griffin told the outlet.