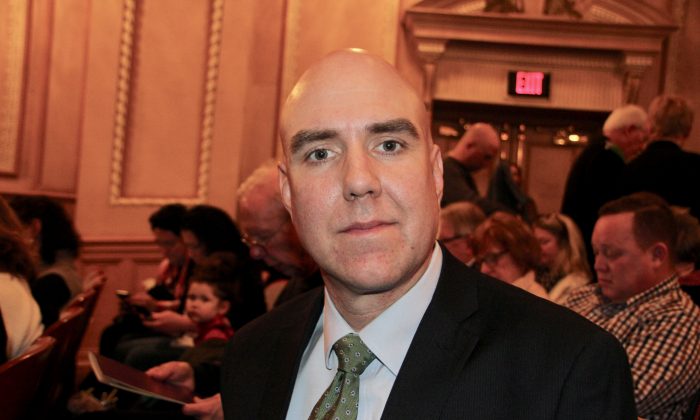 Back then, Kocis and his wife were astonished by the dancers’ synchronicity, fluidity, and skill-level. So they were itching to come back.

The couple was finally able to attend the performance at Merriam Theater on March 2 after missing out last year because Kocis was overseas on tour.

“The level of [the dancers’] technical abilities [is] just astronomical.”

Shen Yun is a New York-based classical Chinese dance company that tours the world every year to showcase 5,000 years of traditional Chinese culture through music and dance.

Kocis works in music and concert production for bands, and is himself a guitarist with 38 years’ experience. He was particularly blown away by Shen Yun’s orchestra, which he described as impeccable.

“It’s just incredible to hear such talent,” he said of the orchestra’s musicians.

Kocis enjoyed hearing the Eastern sounds play on top of the traditional Western arrangement, an aspect unique to Shen Yun’s orchestra which combines both classical Chinese and Western instruments.

But it wasn’t just the music that Kocis approved of. As an industry-insider, he was also able to appreciate every component of the production, from the lighting to the sound to the visual artistry on stage.

Kocis was also struck by the transcendent theme underpinning the performance, partly due to his own experiences exploring meditation and spirituality in recent years.

Shen Yun portrays, via song, dance, and dance-based storytelling, a culture deeply-rooted in belief in the divine. China indeed was once known as Shen Zhou, or land of the divine. The teachings of Buddhism, Taoism, and Confucianism have been passed down for millennia and informed Chinese people’s conduct and thinking for generation upon generation, until it was systematically dismantled by the communist regime after it seized power in 1949.

Meditation is an ancient practice originating from Buddhism that requires the quieting of the mind to achieve spiritual elevation.

Kocis spoke of how meditation has benefited him as an artist.

“It gives you that peace of mind,” he said.

“It gives you that … plane where you can … be one with yourself, be able to express yourself fully without distraction.”

“I think that’s key especially for …  performers at this level,” he said.

The musician said it was wonderful to hear that many of Shen Yun’s performers themselves do meditation, as part of their practice of Falun Gong, a spiritual practice consisting of meditation exercises and the tenets Truthfulness, Compassion, and Forbearance.

As to Shen Yun’s mission to revive China’s traditional culture, Kocis was very supportive, particularly after hearing that the performance could not be shown in China.

Having traveled to more than 70 countries for his work, including China, Kocis said he has seen a lot of places where people are unable to freely express their beliefs and ideas.

“I think that’s a fantastic mission and … I strongly stand behind that.”

With reporting by Janita Kan.