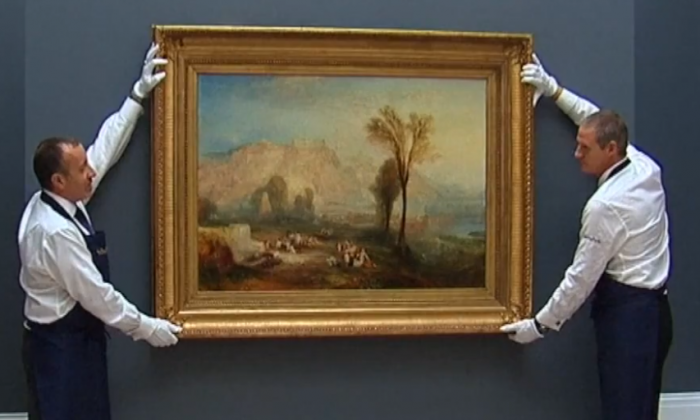 Almost exactly two years since famous painter J.M.W. Turner’s “Modern Rome—Campo Vaccino” sold for $45.1 million in London, another of the artist’s works is up for sale at Sotheby’s London auction house.

The “Ehrenbreitstein” was believed to be painted by the British artist near Koblenz, Germany in 1835, and is one of the greatest of the six works still in private hands, Sotheby’s website says.

“It’s a masterpiece for its condition, its provenance, but also for the fact that it’s a picture where, unlike a lot of Turner, which are very beautiful landscapes, this is more than that,” said director specialist of old master and British paintings at Sotheby’s, Julian Gascoigne.

Gascoigne said the painting evoked a place that the artist loved and that was also important to Lord Byron’s epic poem “Childe Harold’s Pilgrimage,” a literary sensation in the early 19th century.

“It’s a picture where Turner was really trying to say something, and say something quite powerful,” Gascoigne.

The oil painting has an estimated value between $19.5 million and $32.5 million.

Sotheby’s claims the painting, whose full title is “The Bright Stone of Honour and the Tomb of Marceau, from Byron’s Childe Harold,”  is said to be the most important painting of a German subject by Turner.

The painting will be up for auction as part of Sotheby’s Old Masters Evening sale on July 5.