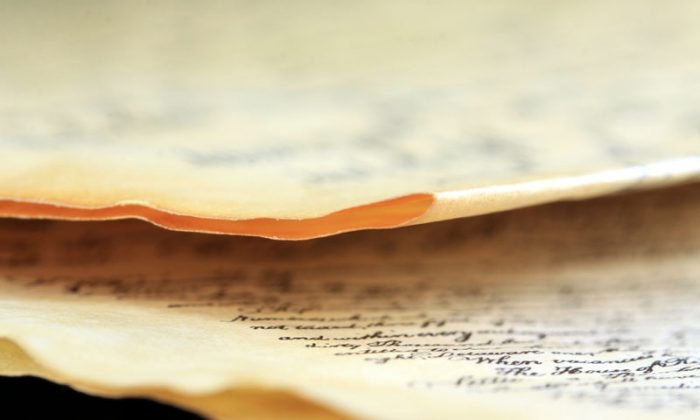 WILTON, N.Y.—On her 80th birthday, Helen O’Conor pulled an old letter from her dresser drawer and asked her son, Ray O’Conor, to read it to her.

She had read it in private every year on her birthday for the past 60 years, but her eyes were failing and she could no longer make out the words.

Postmarked Sept. 6, 1944, the letter began: “My dearest darling.” It was signed by her first husband, Clarence Raymond Stephenson, a man Ray O’Conor had never met and knew hardly anything about.

She had read it in private every year on her birthday for the past 60 years.

In the letter, Stephenson professed his love for his wife and his longing to see their new daughter. He promised to be home soon.

The words were written the day before he died.

“It was mailed the day that his B-17 crashed,” O’Conor tells the Daily Gazette of Schenectady. “He and most of the crew that were assigned to him perished.”

That letter inspired O’Conor to learn everything he could about the tragic love story that played out before he was born. Consumed by the project, he eventually quit his job as president and CEO of Saratoga National Bank & Trust Co. to pursue it full-time.

With his mother’s blessing, he turned the story into a book, “She Called Him Raymond,” which will be published in the spring by Shires Press, an affiliate of Northshire Bookstore.

“I always figured that I would probably not regret spending another five or 10 years at the bank, but if I never got around to really finding out everything I could and completing the story, that’s probably something I would regret for the rest of my life,” the Wilton resident said.

That letter inspired O’Conor to learn everything he could about the tragic love story.

O’Conor’s search for information about his mother’s first marriage led him to Ohio and Michigan, where he met Stephenson’s two sisters and the only living member of his B-17 crew. They offered him stories, photographs, letters, military records, and Stephenson’s diary, which O’Conor’s mother had never seen.

Stephenson grew up in the struggling industrial city of Ironton, Ohio.

Patriotism inspired him to become a combat pilot after the Pearl Harbor attack, and he came to New York City in 1942 for training. He was 21 years old.

Helen O’Conor, born Helen Gregg, was the daughter of Irish immigrants. She was raised in New York’s Hell’s Kitchen during the Great Depression.

While walking through Central Park one day during the summer of 1942, 16-year-old Helen collided with Stephenson, and the romance began.

Ray O’Conor quoted a passage Stephenson wrote the day the two met: “He writes in his diary, ‘I met Miss Helen Gregg and I like her very much,’ and he writes down her address—424 West 47th Street—and then he writes, ‘I feel this will change my entire future life.'”

Their first date was the following Thursday, and on that day, Stephenson wrote, “Had my first official date with Helen. I know we just met, but I’m already in love with her.”

The feeling was mutual. The only thing Helen did not care for was Stephenson’s first name, Clarence, so she called him by his middle name, Raymond.

In August of 1942, Stephenson received orders to leave New York and asked Helen to marry him. Still only 16, she declined because she was too young. He vowed to wait for her.

The two were married in Ohio on Helen’s 18th birthday. They traveled from New Mexico to Utah and Louisiana as Stephenson trained to be a pilot.

Helen was pregnant when her new husband was called into battle.

On their first wedding anniversary, he died in a fiery plane crash in Europe.

“Here’s this 19-year-old girl with a 6-week-old daughter that would never see her father and he obviously never saw her. It’s just hard to imagine what she must have gone through,” O’Conor said.

Ten years later, the young widow married Joseph O’Conor and the couple had three sons. Her first, she named after the husband she had lost.
Helen O’Conor’s second husband died four years ago, never having learned the significance of his firstborn’s name.

Ray O’Conor never knew he was Stephenson’s namesake until nine years ago, when his mother pulled that old love letter from her dresser drawer.

Helen O’Conor died in November 2013, before her son’s book was completed, but she lived long enough to hear the things her first love had written about her in his journal—words that brought her to tears.

“I’m convinced now that people live two lives,” Ray O’Conor said. “They live the life that is easy for all of us to see. She was a mom, she made your breakfast in the morning, she made sure you got off to school. She took care of the family, but there was this whole other life that was heartbreaking, it was tragic, it was also filled with the most exciting experiences and emotionally positive experiences that she had in her life, that she never talked about.”

*Image of “old paper” via Shutterstock