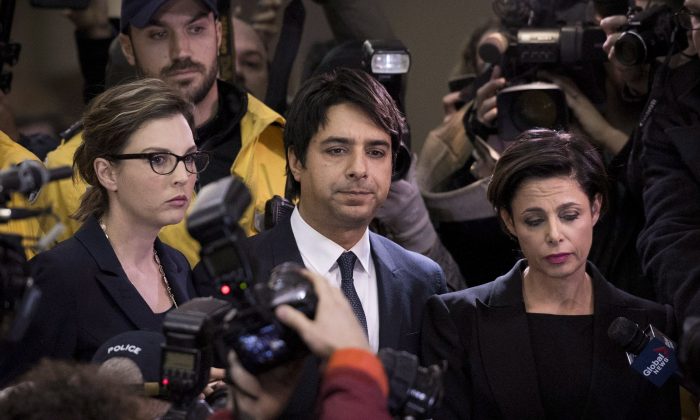 Jian Ghomeshi makes his way through a throng of media with his lawyer, Marie Henein (R), at a Toronto court on Nov. 26, 2014. Henein says the former CBC radio host plans to plead not guilty to multiple counts of sexual assault. (The Canadian Press/Darren Calabrese)
Arts & Culture

Jian Ghomeshi returned to the public sphere last week, testing the waters to see what remains of his once-large audience as host of CBC Radio’s “Q.”

A year after his acquittal on assault charges in a highly publicized trial, Ghomeshi is back with “The Ideation Project,” an online multi-media endeavour. His debut monologue, titled “Exiles,”  asked questions about identity, globalization, and immigration. The idea is intriguing and has the makings of something with traction—that is of course if Ghomeshi’s name wasn’t attached to it.

This is the first we’ve heard from Ghomeshi since his remarkable fall from grace as the host of “Q.” Allegations of sexual assault swirled and he was axed by CBC after the broadcaster announced it had graphic evidence that he had physically injured a woman. Multiple accusers came forward, painting a picture of a violent Ghomeshi, and the court of public opinion tried and sentenced him before his trial had even begun.

He became a pariah who was almost impossible to defend. He disappeared and, apart from court dates, stayed clear of the public eye.

Now he’s back, returning to public life without any acknowledgement of the fallout of the past few years. Ghomeshi is in no position to start with a clean slate and in the eyes of Canadians may be no farther ahead now than he was before his acquittal. The court of public opinion requires more from him before forgiveness can happen. And judging by the Twitter reaction to his latest release, he has a long way to go.

Ghomeshi freely admitted to questionable sexual behaviour but he always insisted that it was consensual. Though he was never convicted, we are left with a “maybe.” However, for the CBC to fire their golden goose after seeing the video he himself provided suggests that the content of that video was worrisome, to say the least.

An acquittal in the justice system doesn’t always equal innocence, whereas guilt coupled with repentance can often result in redemption. In Ghomeshi’s case, a conviction accompanied by a sincere apology may have done more to rescue his reputation.

“Q” has struggled to find a suitable replacement for Ghomeshi. A stint by rapper Shad and now Tom Power have failed to raise the show to its former glory. With either at the helm it is “Q light.” It’s polite and very Canadian but it doesn’t have the edge it had under Ghomeshi

Ghomeshi was an expert host. He was confident enough to stand his ground when his guests were combative and accommodating enough so that they lowered their guard. They opened up, coaxed into offering deeper insight into their personal lives. He asked the right questions and he probed in just the right, uncanny way to access the vulnerability of his guests. A-list stars were lining up for guest spots. It was the little Canadian show that could, a source of pride for the CBC.

Ghomeshi’s raw talent will now remain submerged under his reputation. His new project, no matter how brilliant, will be shadowed by his transgressions.

The nature of Ghomeshi’s new project is both introspective and prescriptive, and for one to share his thoughts with the world and expect an open ear, the messenger is just as important as the message.

Ghomeshi has talent and that talent may draw an audience, but unless he can find a way to redeem himself from his pariah position, his audience will remain on the fringe while everyone else will continue to treat all he touches with suspicion.