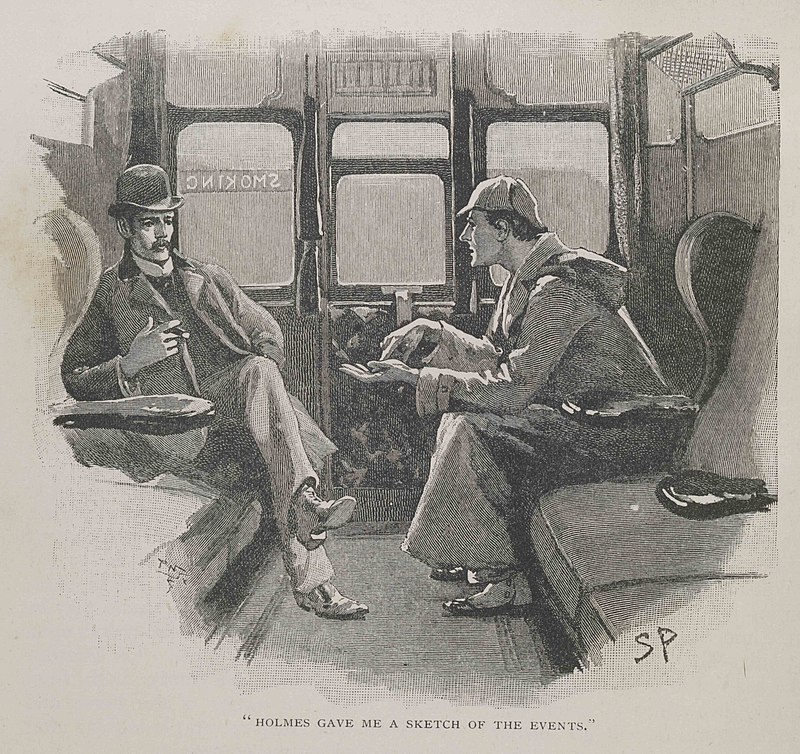 Illustration by Sidney Paget published in Strand magazine for "The Adventure of the Silver Blaze": "Holmes gave me a sketch of the events." Alex Werner Private Collection. (Public Domain)
Books

Something for Summer Reading: ‘The Memoirs of Sherlock Holmes’ by Sir Arthur Conan Doyle

Among the lords of light literature, Sherlock Holmes towers. There is not much mystery about it, either. It is really quite “elementary, my dear Watson.”

“The Memoirs of Sherlock Holmes,” published in 1892–93 in The Strand Magazine, by Arthur Conan Doyle is a collection of 12 remarkable cases in Mr. Holmes’s remarkable career. These include the nearest instance of the above popular misquote. “The Adventure of the Crooked Man” has the closest appearance of the “elementary” line in all of the 60 canonical Sherlock Holmes stories.

As excellent summer reading material, “Memoirs” provides the canon’s most memorable description of summer in the first lines of “The Adventure of the Cardboard Box”:

“It was a blazing hot day in August. Baker Street was like an oven, and the glare of the sunlight upon the yellow brickwork of the houses across the road was painful to the eye. It was hard to believe that these were the same walls which loomed so gloomily through the fogs of winter. Our blinds were half-drawn, and Holmes lay curled upon the sofa, reading and re-reading a letter which he had received by the morning post. For myself, my term of service in India had trained me to stand heat better than cold, and a thermometer at 90 was no hardship. But the morning paper was uninteresting.”

This scene not only captures the great theater of Baker Street, but it also contrasts what has been famously cloaked in gaslight shadow and London fog with the bright blaze of day—and it is no less atmospheric and transporting.

The “Memoirs” collection includes classic Holmes stories like “Silver Blaze,” the “Resident Patient,” and the “Greek Interpreter.” It also presents two of the very first cases Mr. Holmes solved (those of the “Gloria Scott” and the “Musgrave Ritual”), as well as what Conan Doyle intended to be his last case (“The Final Problem”) in which the great consulting detective met his doom plunging beneath Reichenbach Falls in Switzerland while grappling with Professor Moriarty.

Sherlock Holmes may be the most famous man who never existed, perhaps the only fictional character who boasts several scholarly biographies, and one whose fame is rooted in the general desire for goodness to triumph decisively over evil.

Sherlock Holmes does just that as one who holds honor and duty over all else because he is necessarily principled and not necessarily paid.

The motivation of upholding justice and decency and gaining intellectual stimulation is reason enough. Holmes exemplifies this uniquely Victorian heroic category and, in so doing, represents and reinforces his audience’s cultural convictions concerning what makes a man a gentleman.

Though why people are drawn to the mysteries recorded in “Memoirs” is no mystery, there is yet some mystery surrounding the enduring effects of Dr. Watson’s memoirs. They possess a mystique that imparts a strong illusion of reality, rendering characters more tangible, crimes more terrible, and conclusions more triumphant.

A large part of that satisfaction is the tangible thrill that Dr. Watson’s memoirs impart, making him and his illustrious friend and colleague very much like veritable companions. It is certainly a fact that summertime is for books that are like old friends. Dr. Watson and Mr. Holmes are friends indeed to many a reader, ready for reacquaintance any summer day or night, and ever ready to take their friends along on their adventures.

On those adventures, these two seek the truth with all the optimism of summer flowers and the hope that there is light in the world that will conquer the darkness. “Memoirs” carries one of the most striking moments for Holmes as he expresses the importance of both God and goodness in “The Adventure of the Naval Treaty”:

“’There is nothing in which deduction is so necessary as in religion,’” said he, leaning with his back against the shutters. “’It can be built up as an exact science by the reasoner. Our highest assurance of the goodness of Providence seems to me to rest in the flowers. All other things, our powers, our desires, our food, are all really necessary for our existence in the first instance. But this rose is an extra. Its smell and its colour are an embellishment of life, not a condition of it. It is only goodness which gives extras, and so I say again that we have much to hope from the flowers.’”

“The Memoirs of Sherlock Holmes” conjures up a world with villains and virtues that frame a place of danger and delight, allowing readers to enjoy the intrigues of a scintillating era when chivalry was not dead yet and where fellowship and fearlessness conquered all.

The romance of such ideals are the trappings of a summer spirit, and they further enliven a lively time of year with the enormous satisfaction that Sherlock Holmes bestows.